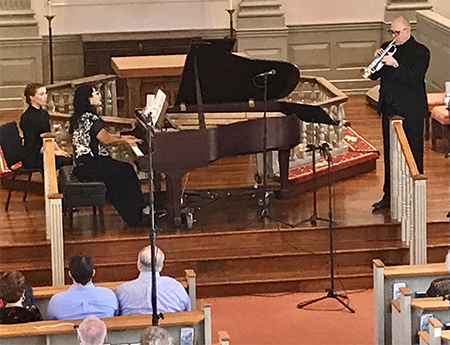 The Cleveland Orchestra brass were busy with Bruckner the prior weekend, but then on Sunday, March 1, The Orchestra’s second trumpet player, Jack Sutte, played a recital at Christ Church Episcopal in Hudson, part of Music from The Western Reserve’s 2019–2020 concert series. His program emphasized artistry over athleticism and served as a good reminder that sensitive, sustained solo playing naturally differs from the big orchestral approach.

Not that Sunday’s concert didn’t have its orchestral moments. Sutte reserved an expansive but hard-edged tone — the kind of sound that cuts through an ensemble — for musical high points and the ends of movements. A couple of mutes, sparingly used, lent symphonic color to the music. And pianist Christine Fuoco was her own orchestra of one, more than a match for Sutte’s biggest, brassiest playing.

But most often, Sutte favored a soft, expressive sound, not distinctly trumpety and geared towards a smaller space. In fact, outside of the chamber repertoire, you’d most likely hear this sort of thing in a jazz setting, though Sutte brought all the virtues of classical legato playing to the intimate setup. Long notes were something to look forward to, carefully shaped and with a substantial but subtle vibrato.

Sunday’s program played to these lyrical strengths. Sutte and Fuoco took on three 20th-century sonatas — mostly tonal, a little bit modern — from a period that saw composers extending serious solo treatment to the trumpet. This was a productive time for the genre, though with dark undertones, reflected in the program’s title, “Sonatas from World War II.”

Karl Pilss’ Trumpet Sonata is part innovative, part reactionary. Written in 1935, it adapts the large-scale harmonies of Mahler and Richard Strauss — already out of fashion at the time — to its chamber music proportions. Sutte and Fuoco brought a sense of gravity to their performance, especially in the piece’s spacious final measures.

Paul Hindemith wrote a sonata for almost every wind instrument, and many of them are rightly cornerstones of their repertoire. His Trumpet Sonata makes full use of the instrument in long chorale melodies, short bugle-like bursts, and even accompanimental figures that aren’t typical for an instrument that’s often the star of the show. And Hindemith had a knack for endings both satisfying and disarming. Sutte and Fuoco arrived at the work’s final cadence, part of a setting of Bach’s “Alle Menschen müssen sterben,” with appropriate eeriness.

Jean Hubeau’s Sonata injected a little humor among mostly solemn music. In its short second movement, “Intermède,” the trumpet flutter-tongues and parodies itself with burlesque fanfare passages. It was also a chance for the trumpet to taste a little of the note-heavy action that the piano supplied throughout the program.

A special moment in the final movement, “Spiritual,” featured Sutte playing with both a mute and a cloth covering the mute. The result was a forlorn melody, drawn out almost as if played on English horn — a reminder that the orchestral world is never far away.

END_OF_DOCUMENT_TOKEN_TO_BE_REPLACED

Franz Welser-Möst led the final bows on Saturday night at Severance, like the star of any show should. The Cleveland Orchestra’s music director is in his element presiding over the ensemble’s annual opera production, which this season packs the drama. Verdi’s Otello — in a concert staging that opened May 21 and runs for two more performances (May 26 and 29) — demands big voices, instrumental forces to match, and a conductor who can give it all shape and direction. END_OF_DOCUMENT_TOKEN_TO_BE_REPLACED

The cimbalom was the feature of the show, an instrument capable of taking on many personas. Its performer, Chester Englander, has shaped his career around the instrument, and has inspired composers to write more repertoire for it, some of which was presented on the program. END_OF_DOCUMENT_TOKEN_TO_BE_REPLACED