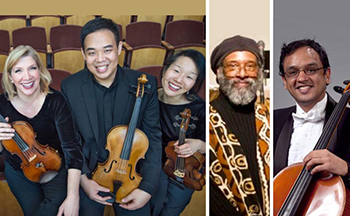 If you’ve ever been curious about weaving together music and spoken word — or if you’ve ever doubted it’s even worthwhile trying — take a listen here to a powerful, surprising combination: the music of Dvořák, played by the Cavani Quartet, and the original poetry of Mwatabu Okantah.

Then, for the price of a freewill offering, go hear the Quartet and Okantah in their program “Collage: Music & Poetry” on the Arts Renaissance Tremont series this Sunday, October 14 at 3:00 pm at Pilgrim Congregational Church. The interweaving not only of two art forms, but also of African and European cultural roots, promises to be fascinating — and a different experience from watching it online, as Cavani violinist Mari Sato told me during a recent telephone conversation.

“If you have that afternoon free and can experience it live, I have to say it’s quite magical,” Sato said. “The messages of the African-American experience, self-discovery, and friendship resonate deeply and move me every time. And the weaving in and out of the poetry with the music is different with each performance as we feed off of one another’s energy and enjoy the interplay of the two art forms. That spontaneity makes for a very live experience. There is nothing like it.”

It also sounds very natural, perhaps because Okantah and the Cavani have known each other for over 25 years, and before Sato joined the Quartet. “My very first performance with the Cavani was playing this program at the Cleveland School of the Arts, and I will never forget it,” Sato said. “It had a huge impact on me. I had no idea how powerful the combination of poetry and music could be.”

The collaboration began through University Circle Inc. “They suggested that the Quartet partner with different artists from the area, and they were matched with Mwatabu. He came to listen to a rehearsal and said, ‘You know, I think we can do something.’ They decided to put together standard repertoire with his poetry, and magic started to happen because he has such a musical ear.”

Poets can be known for their musical sense of language, but Okantah is also an experienced musician. The Assistant Professor and Poet-in-Residence in the Pan-African Studies department at Kent State University has performed as percussionist and vocalist with the Rhodes Street Rude Boys reggae band, in collaboration with Vince Robinson & the Jazz Poets, and as leader of his four-piece Muntu Kuntu Energy Ensemble.

Over the years, the ambition of the Cavani’s and Okantah’s collaboration has grown to encompass new pieces written expressly for it. These include works by Eric Gould, Professor of Piano at Berklee College of Music, and Merry Peckham, the former Cavani cellist and founding member of the Quartet — both of which will be on Sunday’s program. Okantah has also come to recite works by his poetic predecessors, including Langston Hughes, as part of the project. (Below: “Collage” in action in 2016.) 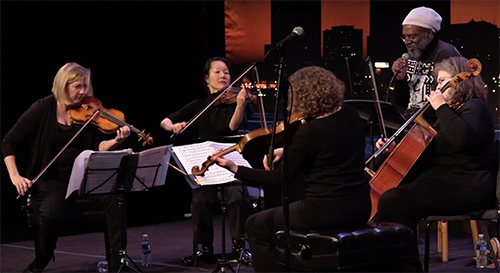 The portion of the evening devoted to Dvořák deserves a little explanation. In the first half, the Cavani will perform his “American” Quartet in F, Op. 96 — music alone. The second half will include excerpts from the second and fourth movements of the work — with poetry. “Even when we perform that slow movement without the poetry, I can’t actually play it without imagining the words because they’ve had such an impact on our interpretation,” Sato said. Also receiving poetic treatment will be an excerpt from Bartók’s Fourth String Quartet.

The process behind it all is flexible. “Mwatabu always comes up with just the right poetry, or he’ll recite something and we’ll think of music that goes with it,” Sato said. Sometimes they even give concertgoers a peek into the artistic lab. “Our last performance with him, we showed the process by which we put together the music with the poetry, doing that right in front of the audience.”

In addition to bringing the program to universities, schools, and series around the country, the Quartet received a 2015 Cuyahoga Arts and Culture Grant to showcase it in and around Cleveland. “We worked with some young, emerging poets and put their words together with music as well. So there are extensions to this program which have gotten other people involved, but the relationship between us and Mwatabu is the origin of it all.”

Having watched this program grow over many years, Sato said the Quartet is excited to bring it to Arts Renaissance Tremont on Sunday. “That’s a really special series run by a friend of ours, and we love all of our friends and partners in the community. It’s a joy.”

Sato and I closed our conversation discussing the changes the Cavani underwent this summer, including parting ways with their cellist. For this program, Sato, violinist Annie Fullard, and violist Eric Wong will be joined by Daniel Pereira, cello faculty and chamber music coach at the Cleveland Institute of Music Preparatory Division. “We’re conducting a search to fill the position, so we are reading with a number of people,” Sato said.

An even bigger change was the Quartet’s departure from their longtime post at CIM, where they had been Quartet-in-Residence for 30 years. There they developed a wide range of festivals, seminars, and concert series initiatives, helping to make them a staple of the Cleveland community. What’s to come from the Cavani?

“The music is the guiding force behind what we do,” Sato said. “The journey continues because there’s so much great quartet music still to learn and perform, and we want to share the joys of string quartet playing for many more years to come.”

The music isn’t easy to play, either. Over the course of two hours, all of the musicians brought fantastic focus to the unrelenting tricky rhythms and countless layers of parts, all of which require a high level of individual responsibility. Even in the moments of calm, the accompaniment remains perpetually unsettled. Adams — who made a sprightly presence on the podium — combines minimalist, repeating motives in gradual layers, which eventually become so dense they overwhelm the senses. Lisa Wong deserves special mention for her thorough preparation of the Cleveland Orchestra Chorus, as does Jennifer Rozsa for the Children’s Chorus, which made a brief but memorable appearance in the last few minutes. END_OF_DOCUMENT_TOKEN_TO_BE_REPLACED

Warner was a fitting choice not just symbolically, but also sonically. The combination of Baroque strings, theorbo, harpsichord, and organ created a nice blend and balance, allowing the opportunity for softer instruments to stand out. In Johann Rosenmüller’s Sonata à 5 in g, Doug Balliett’s violone pizzicatos resonated beautifully, and in Johann Heinrich Schmelzer’s Sonata in d, harpsichordist Elliot Figg became an equal player in the texture with his clever improvisations. The slight exception was Joshua Stauffer on theorbo — despite the instrument’s big physical presence on stage, he received little time in the spotlight. END_OF_DOCUMENT_TOKEN_TO_BE_REPLACED