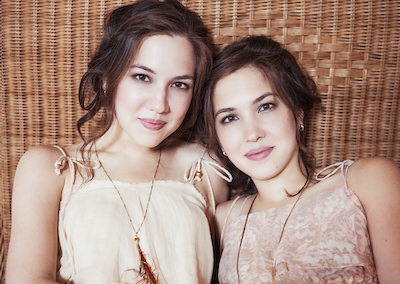 Bits of the following transcript will almost definitely be misattributed, though only the Naughtons will know where. But as you read, perhaps you can imagine that you’re actually seated in an auditorium, enjoying that rare sense of mystery — who is playing what? — that can emanate from a pair of players trading off lines as if — well, as if they’ve known each other their entire lives. 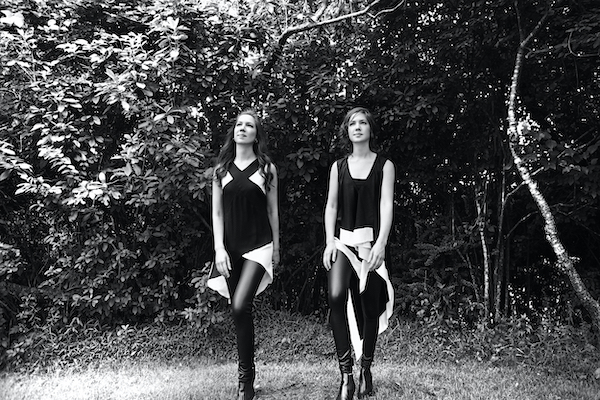 Jarrett Hoffman: You focused on American music in your 2019 album American Postcard, which includes all the pieces on this program except for the four-hands arrangement of Bernstein’s Candide.

Michelle Naughton: That was something we did in honor of Bernstein’s 100th birthday. We actually performed it at the site where he’s buried, so it’s a special piece for us.

MN: It was in a little catacomb, so for one thing it was dark, and it was a little claustrophobic. There was this kind of risk factor built into it for that reason, but that made it all the more suspenseful and exciting.

JH: I was reading the program notes from one of your previous concerts, and there was an interesting point that was brought up about Paul Schoenfield’s Five Days in the Life of a Manic Depressive — that it’s difficult to describe. Some of the music sounds humorous and really fun, but given the title, perhaps it’s more serious? Where do you fall in trying to describe it?

Christina Naughton: It is a really crazy piece. One of the cool things about American music in general is that it draws its influences from many different sources, and this one is very much influenced by jazz. And interestingly enough, Schoenfield spent a good portion of time in Ohio, so it’s perfect for this program.

JH: You two gave the premiere of John Adams’ Roll Over Beethoven in its two-piano form. Did you get to work with him at all as part of that process?

MN: We did — that one originated when we were having coffee with John in Miami, and he brought up the idea of arranging his Second String Quartet for two pianos. We started looking at it and fell in love with the score, and that’s how this piece was essentially born.

JH: Of course, the Copland Simple Gifts is perfect for an American playlist. On the album it’s the closer, and here I think it closes the first half. That’s not a huge difference, but perhaps it would be interesting to talk about ordering an album versus a concert?

CN: Absolutely, and the whole experience can change based on the ordering of pieces. Occasionally, I’ll even change it the day of the concert based on how I’m feeling. And like you said, the live energy of whether people are there or not — that was definitely something we thought about during the pandemic, because so many of the performances were virtual, where you couldn’t see the audience.

Of course the pandemic was absolutely devastating to the music industry in general, but the one thing that stayed alive is the art — in fact, I think the art itself flourished. Not only because we had all this time to study scores, rethink things that we had played before, and learn new pieces that needed a lot of time to breathe. But also, something kind of moving is that both the classical music audience and everyone in the classical music industry are definitely not fair-weather crowds, so we found all kinds of ways to make things happen.

JH: What has it been like to make the transition back?

MN: Well, there’s nothing like seeing real people when you walk onstage.

CN: Yes, and that aspect of a whole group of people experiencing the same moment together and actually reacting to it with each other, in the moment — I think that’s what we missed the most, so that’s been such a joy.

JH: And there’s the post-concert revelry. Did you have any of that with Zoom concerts?

CN: It was pretty funny — there were places where they made it work to send wine and cheese boards to the audience so they could have that reception experience. We would all sit together on Zoom — everyone was in their kitchen or their home office — and we would have a kind of pseudo-celebration (laughs). 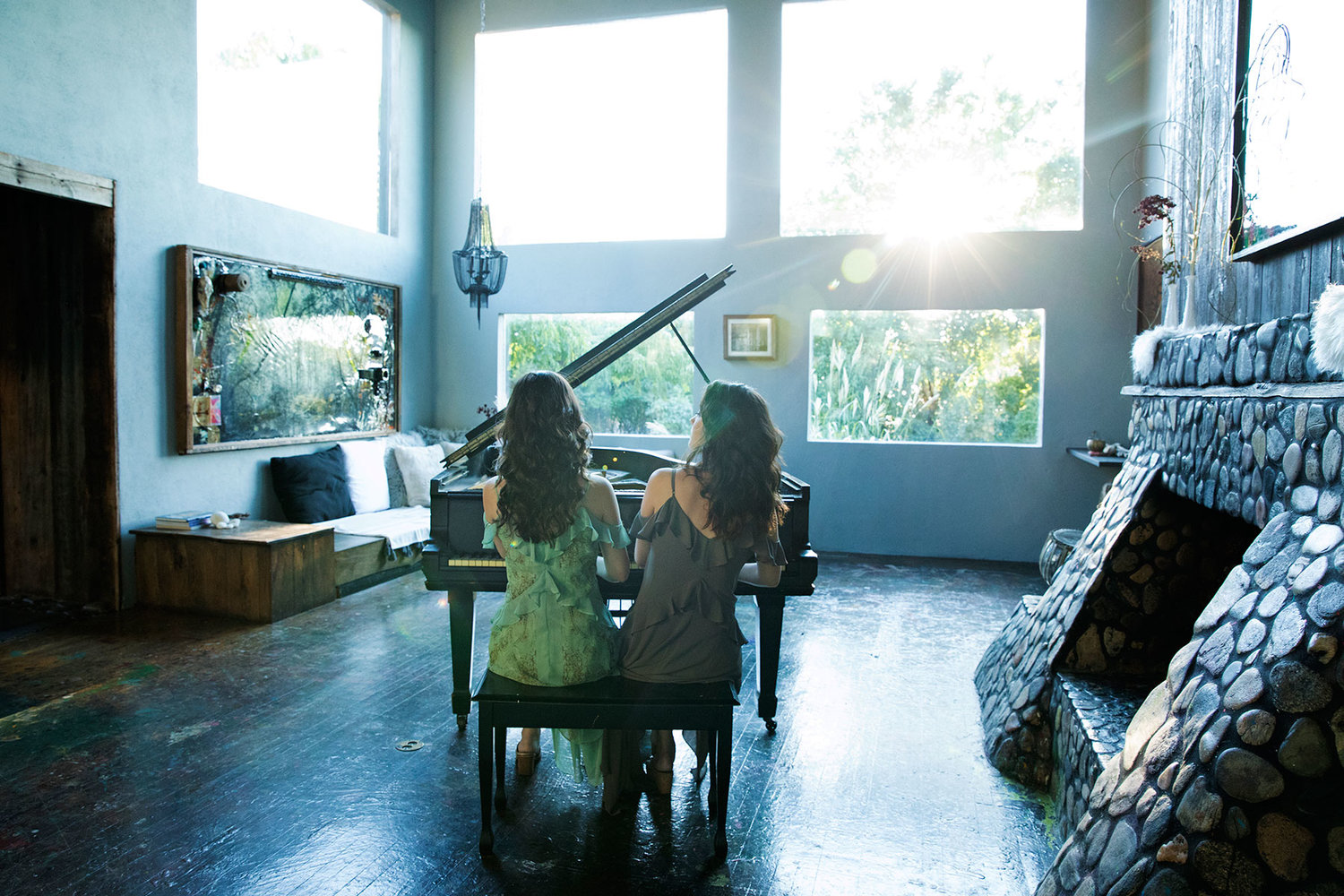 JH: Let’s jump back to your program — there’s some four-hands, and some two-piano. Do you have a preference between those, or a preference about who does the pedaling on a single piano?

CN: With pedaling, we’re unique in that we share the pedals actually, interchangeably. Having someone pedal for you almost feels like having someone brush your teeth for you.

CN: In terms of whether we prefer four-hands or two-piano, it’s really hard to say — it’s different for different works. And in a way, both mediums actually represent things from life. Four-hands often shows a side of humanity where people have to sacrifice some of their own needs for either another person or society. And by doing that, we’re all able to do things that we wouldn’t be able to otherwise, and we can create something beautiful.

Two-piano is often used for orchestral works — it gives a broader feeling. You’ll see at this concert that the pianos are dovetailed together, so the keyboards are far apart. And people ask, doesn’t that make it almost impossible to play together?

The answer is, yes, it is more challenging, but I actually think the effort is not a bad thing. It makes it so that we can’t rely on anything physical. We don’t have any cues, we don’t look at each other, we don’t see each other’s hands — nothing. So you have to rely on really getting into the other person’s emotional world — understanding each other and communicating through other ways.

JH: In terms of getting into each other’s emotional world, it’s interesting how musicians can have different things they need to do before or after a concert to get in the right frame of mind. You two are known for being incredibly in-sync as players — do you also overlap in that other way?

MN: That’s an interesting question — I don’t think we’ve been asked that before. Day to day it’s different, I will say. Also based on the fact that even I myself will have a different feeling before or after a concert, the chances of the two of us being in the same mode on one day is very, very small.

But there are certain things that help both of us. If possible, we like to have a keyboard backstage, or at least some way to stay warm. If it’s not playing piano, it’s dancing or doing something physical before we get onstage, because performing is like being a small-muscle athlete in some ways.

And sometimes, depending also on different moods, I like to listen to pieces by the same composer — not the piece that we’re about to play, but just to get inside that composer’s language.

[Something I’d never heard before — uncommon, or perhaps a well-kept secret among great players?]

The cimbalom was the feature of the show, an instrument capable of taking on many personas. Its performer, Chester Englander, has shaped his career around the instrument, and has inspired composers to write more repertoire for it, some of which was presented on the program. END_OF_DOCUMENT_TOKEN_TO_BE_REPLACED

You wouldn’t expect that acoustic from a glance at the nave, which is wide and long, but not especially lofty. But when I guest conducted a local amateur choir and professional orchestra in Beethoven’s Mass in C there a few years back, during the first rehearsal we released the final chord of the “Gloria” and listened in astonishment for the next several seconds. The sound continued to roll down the space like the big wave that surfers dream about. END_OF_DOCUMENT_TOKEN_TO_BE_REPLACED