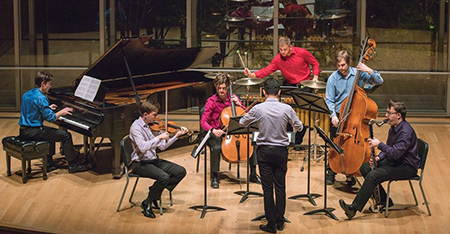 Concerts by CIM’s New Music Ensemble have such startlingly high levels of performance that it’s hard to remember that the musicians are, in fact, students. In their concert on Saturday night, April 7 at the Bop Stop as a part of this year’s NEOSonicFest, the ensemble gave immaculate performances of works selected from their 2017-2018 repertoire.

A sneak premiere of David Rakowski’s Breakdown (2013) — due to be officially premiered on April 15 — opened the program. Featuring violinist James Thompson, violist Michael Jones, cellist Joseph Teeter, and pianist Sichen Ma, the Bop Stop performance was both sprightly and menacing. The light swing in the middle, the deep unsettling low piano and plucked cello, the passed-around repeated notes, and the glissando ending give this music a feeling of continually leading up to a high point that never comes.

Rakowski is well-known in new music circles for writing a huge number of études for piano, 100 to be exact. He is well on his way with préludes as well — 75 as of this writing. Maria Paola Parini expertly shared five of the préludes in what was likely the premiere of each. “Zanzara” (No. 44), “Rustle” (30), and “Zap” (26) danced around the keyboard, variously tinkling, rippling, bouncing, and pounding in virtuosic displays. On the other hand, “Canary” (66) waltzed off-kilter and “Alce Americano” (46) painted a moose in ascending Scriabinesque rolled chords. Rakowski writes well for the piano, and his titles are humorous and memorable.

The feat of the evening was Stephen Hartke’s four-movement violin duo Oh Them Rats Is Mean In My Kitchen (1985). Thompson and Beatrice Hsieh were ferocious, slithery, grungy, and lithe in this homage to early blues. Hartke’s fiendish writing is a barnbuster, including vigorous plucking and strumming against dizzying bowed lines, unsettling upbow crescendos amid scrappy gestures, and sliding grooves with crazed flurries. Thompson and Hsieh perfectly embodied this devilish fiddling in sound.

Fitch’s choice of Muir feels right. The naturalist’s overwrought paens place a single human in awe of nature. Now a century later, these beautiful places — and the humans setting eyes on them — are in existential danger. May we soon change ourselves so that future generations may experience these beatitudes as Muir and Fitch have.

END_OF_DOCUMENT_TOKEN_TO_BE_REPLACED

Rodgers & Hammerstein’s Cinderella was originally produced for television in 1957 — seven years after the animated Disney film was released — and starred Julie Andrews. According to the Rodgers & Hammerstein website, it was viewed by over 100 million people. END_OF_DOCUMENT_TOKEN_TO_BE_REPLACED

The story line has its origin in an 1855 play and an 1842 farce that Thornton Wilder mined for his 1938 play The Merchant of Yonkers. When that turned out to be a flop, in 1954 Wilder made the crucial decision to re-center the show around the character of the legendary marriage broker Dolly Gallagher Levi and renamed it The Matchmaker. END_OF_DOCUMENT_TOKEN_TO_BE_REPLACED

The Dodero Center for the Performing Arts at the Gilmore Academy in Gates Mills is one feature of an impressive campus. The auditorium is shallow, the stage is deep, and the ensemble played without a shell. Throughout the program, the sound, especially in instruments’ lower registers, tended to disappear. END_OF_DOCUMENT_TOKEN_TO_BE_REPLACED