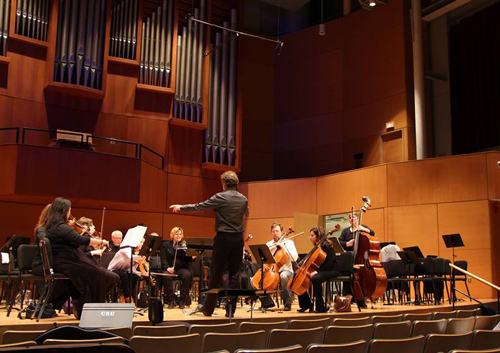 NEOSonicFest planned a big agenda for its fourth concert at CSU’s Waetjen Auditorium on Tuesday, March 24. The Cleveland Chamber Symphony brought works by five “Young and Emerging Composers” to life under music director Steven Smith; Liza Grossman and the Contemporary Youth Orchestra reprised Stefan Podell’s Concerto for Two Violas and Orchestra with Lynne Ramsey and Jeffrey Irvine; and the two orchestras played side-by-side under Smith’s direction in a performance of Bernard Rands’ London Serenade to honor the memory of CCS founder Edwin London.

Those five composers, who represented four different colleges or universities in the region, had ‘emerged’ through a competition. The prizes were performances of their works by a professional ensemble — priceless, as the credit card commercial would put it. Steven Smith invited each composer to come to the stage and say a bit about what the audience was about to hear.

J.M. Caffrey’s Thinking captured the wanderings of a fertile mind. The College of Wooster theory student and percussion major wrote especially skillfully for his own family of instruments, which kept Andrew Pongracz, CCS’s lone percussionist, busy throughout the piece. Bent pitches from flute and oboe over string chords and woozy wind meanderings alternated with lyrical passages. The piece ended with a gong.

Samuel Boateng born in Ghana and a graduate student at Kent State University, drew on an African children’s game for his Pi’ Lolo (a dance for marimba), which also gave Andrew Pongracz a lot to do, this time in the way of four-mallet work. Marimba was eventually joined by cellos, then strings, then woodwinds in this pleasantly hypnotic piece.

Aubrie Powell’s The Hermit is one of a series of pieces the Baldwin Wallace composition student wrote using the idea of Jungian archetypes (“Examples of a Hermit can be Yoda and Obi-Wan Kenobi from ‘Star Wars’ and Nietzcsche’s Zarathrustra,” she wrote in her program notes). Open fifths and harmonic gestures at the beginning were reminiscent of Copland. The work crested in a big climax, ending softly in the minor with a pizzicato.

The meaning of Buck McDaniel’s Three Movements (for string orchestra) was up for grabs, the CSU coposer said in his program notes: “its itinerary is different for each listener.” Expanding on that idea in his remarks from the stage, he invited the audience to find whatever they would in the music. Though obviously influenced by the Repetitive Music movement, McDaniel’s three pieces had shape, direction, and varied rhythmic vitality. The bleakly lyrical second movement led to an engaging finale enlivened by a start-stop ostinato with syncopated bass lines.

Steven Hecking’s Collapse and Resurrection, the third movement of a chamber symphony by the same title, took on a big theme. “The work as a whole attempts to describe the events surrounding and including the end of the world in Norse mythology,” he wrote in his program notes. The third movement “puts to music the rekindling and growth of all life — from the ground to the heavens.” Agitated and eventful, the piece began with timpani, bells and murmurings, becoming polymetrical and ending with a sort of fugue introduced by the winds.

After intermission, the stage filled up with the members of the Contemporary Youth Orchestra, wearing black T-shirts emblazoned with “20,” celebrating the orchestra’s entry into its third decade. That means that CYO is now older than any of its players.

Podell’s concerto was first performed last December by Lynn Ramsey, Jeffrey Irvine and the CYO (read Mike Telin’s review here). The work is a narrative of the vicissitudes implicit in a close relationship (Podell had the idea both of his own marriage and that of the soloists in mind when he wrote the piece). Understandably, the work is episodic and complex, but Podell’s ability to create a long arc joins its disparate musical material into a cohesive whole.

It’s always good to put a piece on the shelf for a few months before reviving it, and Podell’s concerto undoubtedly benefited from a bit of a rest before its second performance. It sounded confident and settled, and Ramsey and Irvine seemed to be relaxed and having a good time. When Podell pitted the soloists against full orchestra, Ramsey and Irvine were sometimes overpowered, but balances were surprisingly good and the piece inspired warm feelings. 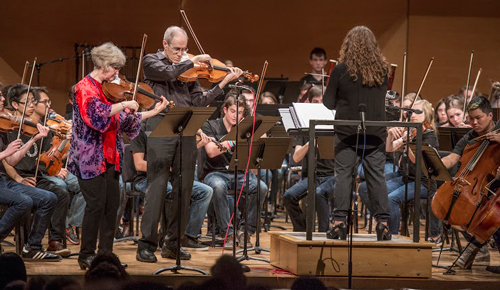 For the grand finale, CCS joined CYO under Steven Smith’s baton for Rands’ London Serenade, also a reprise from CYO’s December concert. The leadership of the professional musicians, who shared the first few stands with their younger colleagues, as well as the precision of Smith’s conducting, resulted in a really impressive reading of a not-so-easy work. Wind and harp soloists came from CYO and got well-deserved standups from Steven Smith at the end.

This was a fun and rewarding evening. Alas, there were more people on stage than in the audience for the second half. That’s a problem that begs to be solved.

Photos of the two orchestras and the CCS rehearsal by Rich Rinehart.

Photo of Ramsey and Irvine with CYO (December 7, 2014) by Robert Muller.