Zeitgeist, the new music ensemble from St. Paul, Minnesota, hosted their Cleveland colleagues, No Exit, in concerts in the Twin Cities last fall. No Exit returned the favor last weekend, joining Zeitgeist for three concerts at the Happy Dog Euclid Tavern, Heights Arts, and SPACES. We caught some of the pieces on their joint playlist at SPACES’ new location in Hingetown on Sunday, January 15, where the musicians presented several sets between noon and 5:00 pm.

The ambiance was completely informal. A double row of chairs was set up in the main gallery, but most of the audience either stood around the perimeter or circulated between rooms. Titles were only sporadically announced, and at times it was difficult to know if musicians were warming up, testing equipment, or if a piece had actually started.

The audience was obviously a mix of visual art fans and new music followers. The former were a chatty crowd, even when seated, the latter intent on hearing what was going on and not averse to shushing their more garrulous fellow travelers. Still, the laid-back atmosphere made it easy for the curious to dip an ear into music that was often both new and strange. And there was enough visual content to hold the attention of those who may be more stimulated by images than sounds.

Like most No Exit performances, this one featured a fascinating variety of styles and media. We walked in halfway through the first performance of Mark Applebaum’s The Metaphysics of Notation, in which the whole group of instrumentalists performed a graphic score projected on the back wall. In the program notes, No Exit associate director James Praznik writes that the piece “seeks to deconstruct and reinterpret the way in which musicians are trained to respond to certain symbols and then, by placing these symbols in a series of abstract collages, force a group of players to improvise and audibly bend their understanding of music in front of you, the audience.”

While made up of a vast catalogue of familiar symbols, the collages are complex and sometimes mystifying. Needless to say, the musicians’ reactions were as varied as individual interpretations of Rorschach images, and the collective texture could never be the same twice — as we heard in a second performance an hour or so later. Did the piece go on a bit too long? Perhaps, but there was a lot to watch and listen to. 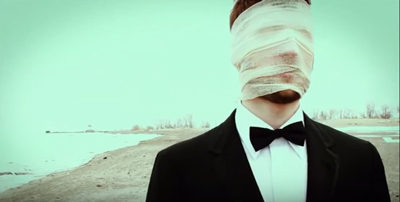 A second multimedia work was James Praznik’s film Almost a New Man, originally performed by No Exit in 2011 with live cello, but now recomposed for bass clarinet and percussion (Zeitgeist’s Pat O’Keefe and Heather Barringer). Praznik shot the 17-minute film in addition to writing the live music to go with it.

The narrative is inscrutable, and some of the images disturbing. A man on a beach (Derrik Balogh) confronts a figure whose head is swathed in gauze. Cut to a filthy washroom sink into which the man spits up blood and later extracts a vinyl record from under the water. Gauze man drowns beach man in a bathtub, but both return for another encounter on the shore. And there’s more (you can watch the film with its original score here). The live music on Sunday was more sporadic than on the film, but no less chilling, and expertly played.

Janika Vandervelde’s Shadows of the Electric Moon, a rare, virtuoso piece for upside-down snare drum, featured Zeitgeist’s Patti Cudd in league with a Mac laptop and a sound exciter. Eighty-some cues found Cudd using sticks and antique cymbals to conjure sounds from every part of the drum and its stand. Her virtuosic performance was equally riveting to watch and to listen to.

The two most accessible pieces we caught on Sunday were Marc Mellits’ Black and Pat O’Keefe’s Hello, Cleveland! Praznik writes in the program notes that “one of the greatest expressive qualities of ‘American Minimalism’ is its ability to clearly project a message of unfiltered excitement and joy during a performance.” That’s precisely what bass clarinetists Gunnar Owen Hirthe of No Exit and Pat O’Keefe of Zeitgeist accomplished during their dazzling encounter in Black. Chasing each other at daring time intervals, they ran through a whole roster of musical styles — breathlessly, though they seemed scarcely winded at the finish line.

O’Keefe’s piece, inspired by the Frank Gehry building at Case Western Reserve University, begins with lush textures, then turns foot-tappingly jazzy. Earning its Hello, Cleveland! inscription, it brought smiles to the faces of the onlookers.

Among other very positive impressions to be formed on Sunday: the acoustics of SPACES’ new digs are just as favorable to music as the old gallery space down the street. More performances to come, we hope.