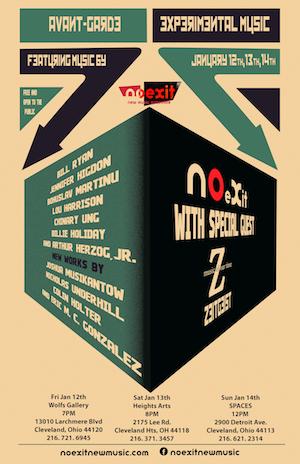 “We’re starting off the new year with a bang,” No Exit artistic director Tim Beyer said during a telephone conversation. This weekend No Exit will continue their collaboration with the St. Paul-based new music ensemble Zeitgeist. “The two ensembles will once again be sharing a stage in a series of concerts that is sure to be an unforgettable musical experience.” The series kicks off on Friday, January 12 with a 7:00 pm concert at Wolfs Gallery. The ensembles will perform at 8:00 pm on Saturday the 13th at Heights Arts and at 12:00 pm on Sunday the 14th at SPACES.

“This is our first time at Wolfs Gallery and they’re pulling out all the stops. Hors d’oeuvres will be served at 6:30 pm and there will also be valet parking,” Beyer said. “It will be nice to introduce people to Wolfs’ extraordinary space and exquisite collection of paintings and sculpture while enjoying an intimate evening of music. We love playing at Heights Arts and SPACES, so this is going to be an incredible series of concerts. As always, the performances are free and open to the public.”

Beyer said that their collaboration has become ever more meaningful since No Exit and Zeitgeist began working together three years ago. “We’ve been to St. Paul three times — the last was back in October of 2017 — and this is the second joint concert in Cleveland. Over time concerts have included not just improvisation, but new pieces by composers from St. Paul and Cleveland that were written for both ensembles.”

Due to space considerations, Friday’s performance at Wolfs Gallery will feature music for smaller ensembles. The concert will include the world premiere of Tzimtzum by Twin Cities composer, author, and percussionist Joshua Musikantow. The work’s title is Hebrew for “contraction,” a concept in the Lurianic Kabbalah that states that in order for God to create a space for lesser spiritual and physical planes to exist, God must contract, or conceal his/herself. 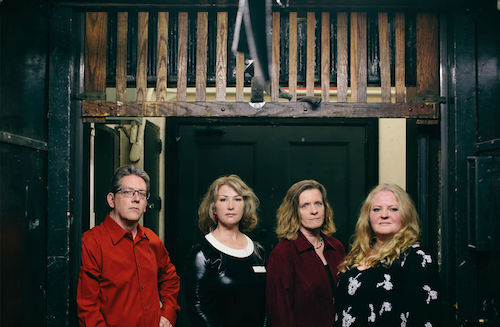 “Joshua’s music has been performed in concerts and festivals in England, France, Sweden, the Czech Republic, and across the United States,” Beyer said. “I met him many years ago when we were both studying in Prague.” The concert will also include a new work by Colin Holter. “Colin is interesting to our collaboration in that he is from St. Paul but living and teaching in Cleveland. He wrote this piece for Zeitgeist for our October concerts, so this is a Cleveland premiere. Suburb is about his move from St. Paul to Cleveland.” Works by Bohuslav Martinů, Lou Harrison, Jennifer Higdon, and Billie Holiday and Arthur Herzog Jr. will also be included.

Saturday’s and Sunday’s program will feature works for larger ensembles, including the world premiere of No Exit for Zeitgeist, by No Exit pianist and composer Nicholas Underhill, as well as the Cleveland premiere of Eric Gonzalez’s Found Again, Secure in Migration. “Eric lived and worked in Cleveland for a long time but has recently moved to St. Paul. He wrote the piece for our collaboration.”

A work suggested by Zeitgeist is Spiral XIV “Nimitta” by Chinary Ung, a Cambodian-American composer who teaches at the University of California San Diego. “His music is wonderful and immersive — something you experience rather than merely listen to. He uses a lot of traditional music that includes the Khmer Pinpeat and Balinese Gamelan.” The program will be rounded out by Michigan-based composer Bill Ryan’s Blurred and Joshua Musikantow’s Tzimtzum.