Artistic director Timothy Beyer set the tone for the opening work by Jeremy Rapaport-Stein, appearing like the floating head of the Wizard of Oz in a quasi-film noir introduction. Beset with a parched throat, he turned the emcee job over to a ventriloquist’s dummy, who carried on in time-honored vaudeville style while Beyer drank a glass of water.

That led to the first world premiere, Rapaport-Stein’s ten-movement There was something that I had wanted to say to you… At the opening, the hand of No Exit assistant director James Praznik wads up multiple pages of a legal pad while trying out title phrases with a not-so-sharp sharpie. Ultimately, there are 59 words in the title, which should earn the piece at least an honorable mention in Guinness.

In his notes, the composer writes,

This piece came from thinking about anxiety and isolation. I kept coming back to the image of a solitary musician wandering around their apartment, making tiny pieces out of every action they took. What started out as a possible metaphor for a piece turned instead more into the piece itself literally (as well as a prescription for the process of its composition). 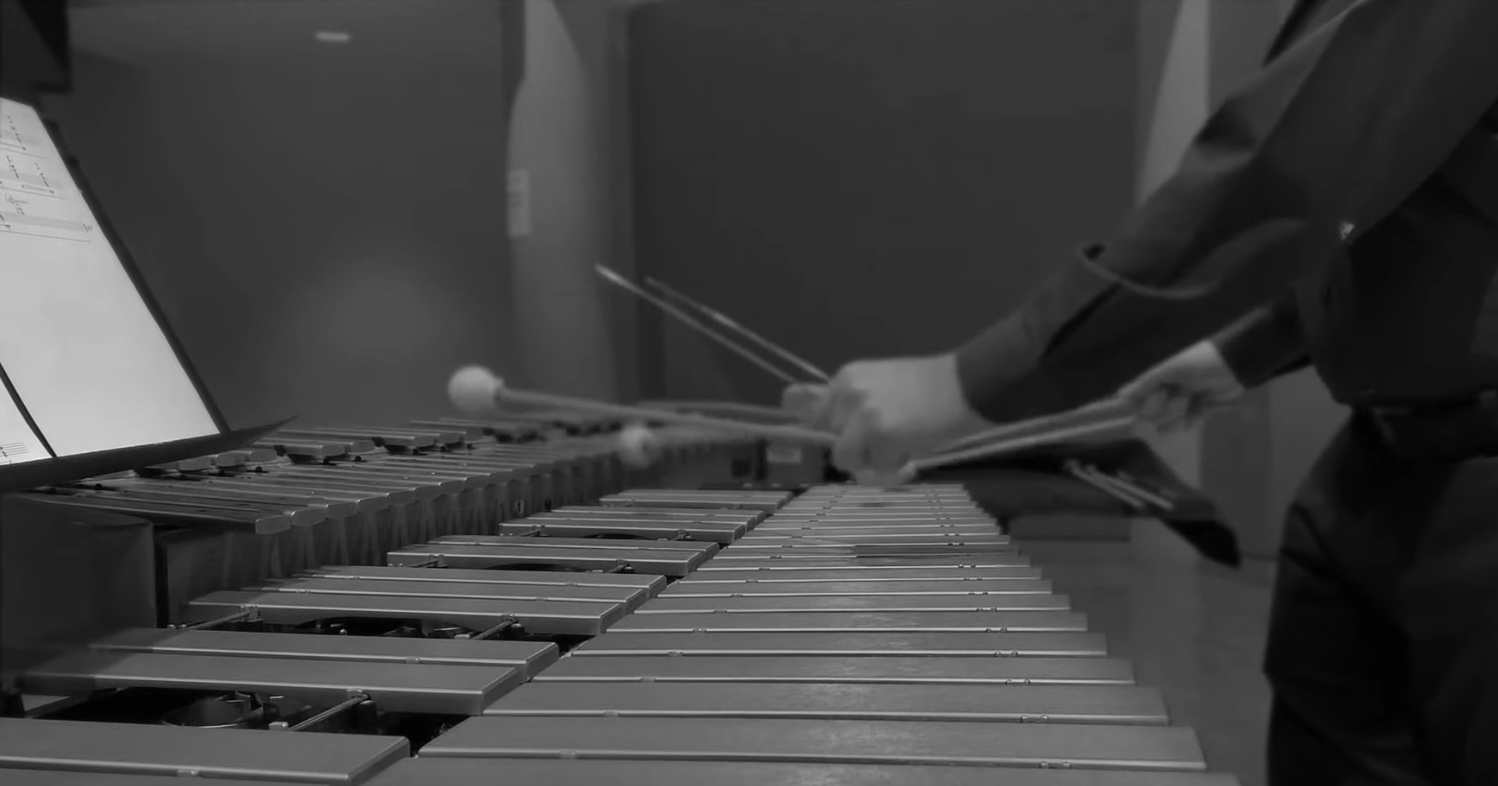 We see the hands — but never the face — of percussionist Luke Rinderknecht, who plays mysterious chords on the marimba (“flutterbug”), tunes a pair of miniature radios (“radiocounterpoint no. 5”), taps on a ring binder (“fingers”), clinks on three wine glasses (“hallelujah”), dallies with a snare drum and high hat cymbal (“villanelle”), and plays a mallets toccata (“for James Praznik”). Praznik also noisily fries eggs in a pair of pans (“breakfast”), and elasticizes his face (“mouth counterpoint no. 1”). Finally, an unseen hand types phrases dimly displayed in reverse on a vintage monitor, accompanied by the sounds you associate with Houston attempting to connect with a space flight (“dearest”). The final message, i have loved you, appears in letters large enough to read. 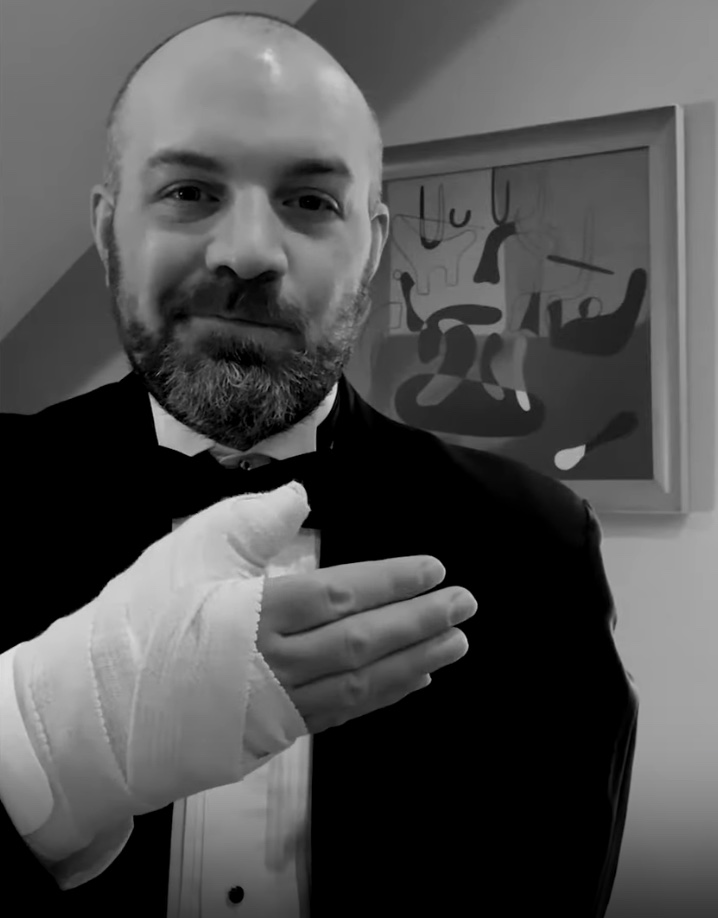 That wacky spirit continued into an intermission feature, when No Exit clarinetist Gunnar Owen Hirthe, recovering from hand surgery, pointed out his bandaged paw and, responding to Beyer’s suggestion that he contribute something to the concert, amusingly demonstrated how to make a one-handed martini.

On either side of that bit of bartending, violist James Rhodes brought gravitas to the proceedings with attentive, nuanced performances of Giancinto Scelsi’s 1964 Xnoybis III and a second world premiere, Tyler Adamthwaite’s Fleeting Remnants of the Severed Wonderland. 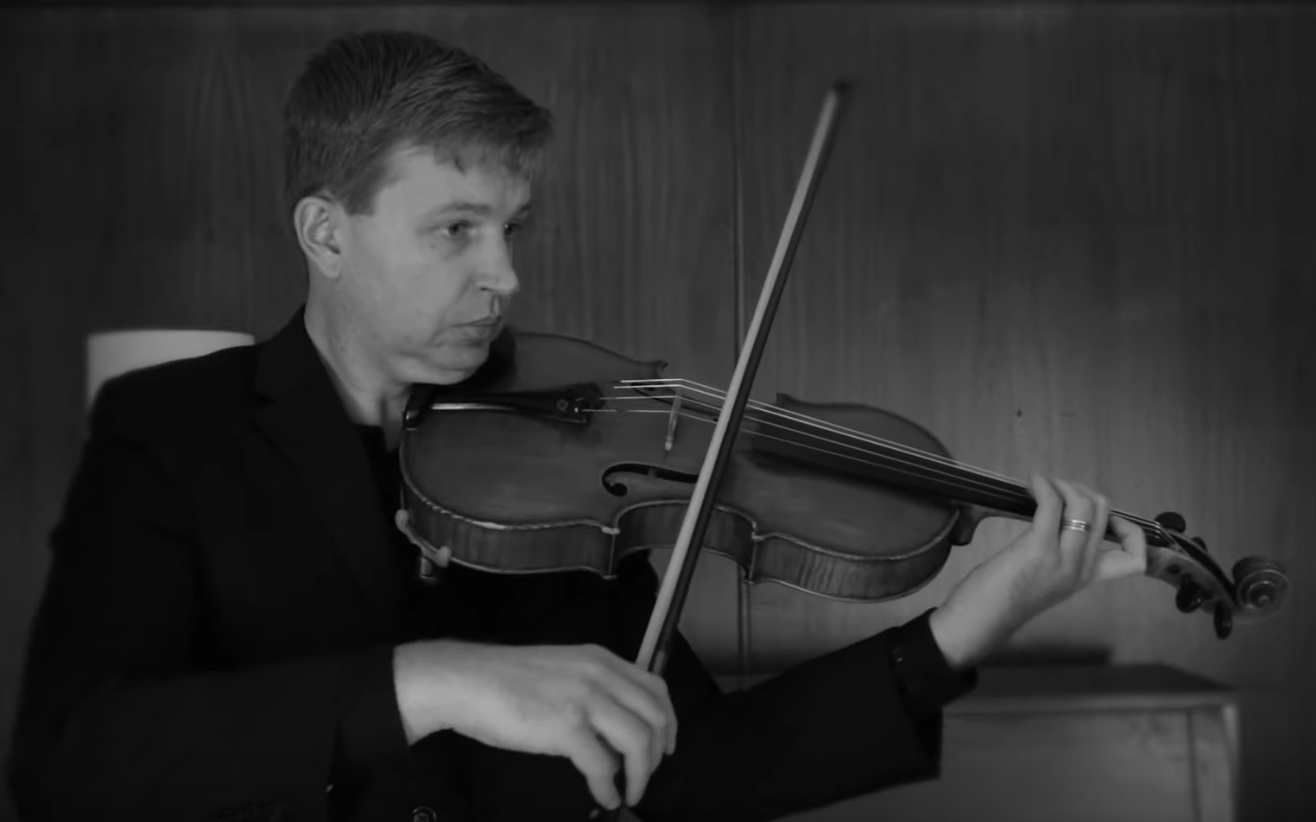 Growing out of Xnoybis II, described in the program notes by Praznik as a “meditative soliloquy on a single pitch,” Xnoybis III “gives the illusion of a conversation among competing voices…the root of this music lies within the composer’s conception of patience…above all, what stands out is his unconditioned way of improvising, as if wrapped in a mist of Zen-like emptiness.” Rhodes prefaced his performance with the caveat that it “requires great concentration both from the performer and listener.”

Adamthwaite introduced his piece, saying that “It’s about the contrast between frantic, raspy mumbling and a beautiful, singing quality of sound,” and inviting the listeners to come to their own conclusions about what they mean. 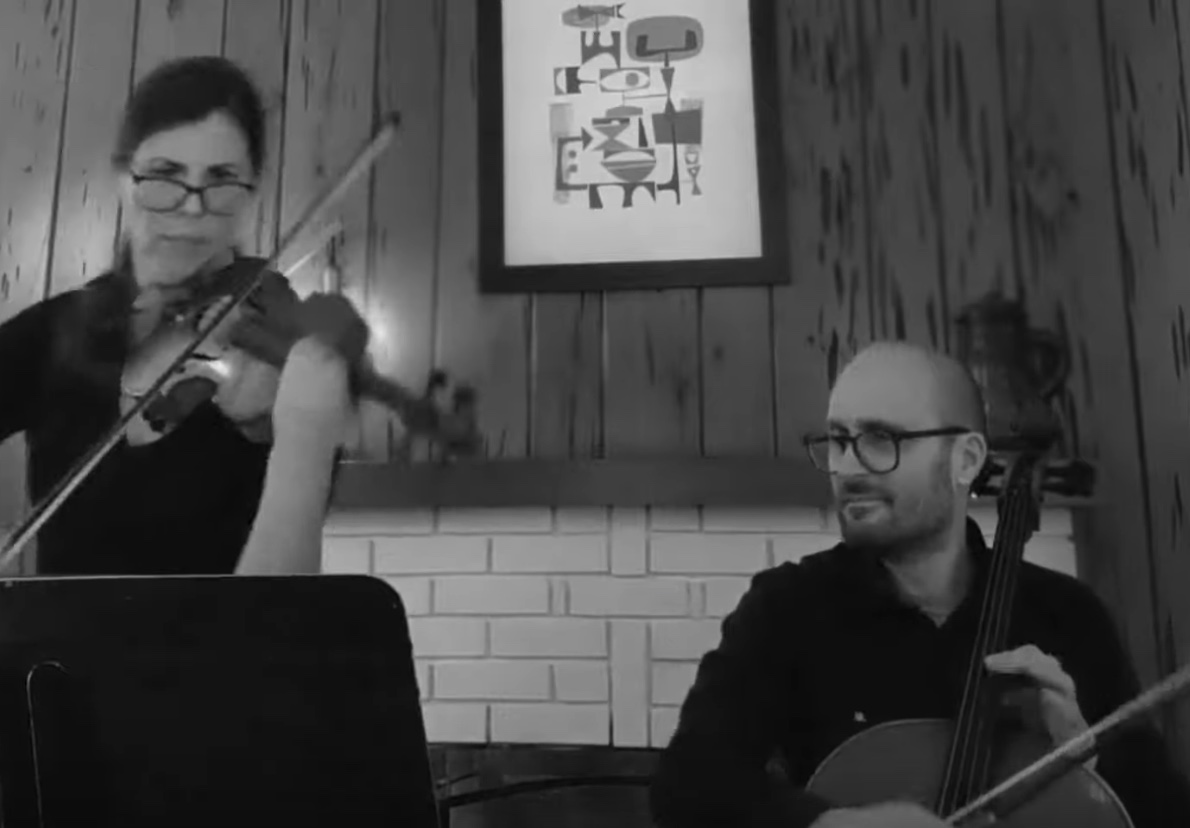 Cellist Nick Diodore noted that Iannis Xenakis wrote Dhipli Zyia in 1951, when he was studying with Messiaen and working in the architectural firm of Lecorbusier. He said that the music was folk-driven, like that of Bartók, and the performers are told to play without vibrato. “Personally, I find that quite refreshing.” Then Diodore and violinist Cara Tweed gave a tight, energized performance of probably the most accessible work on the program.

Back in the theoretical realm for the third world premiere, Inga Chinilina wrote in her notes that “Give Me a Second uses the tuning system as an equal participant of the compositional process, along with pitch, rhythm, and timbre.” In her spoken remarks, she said that her piece concerns itself with the interval of a second, but because of different temperaments, “not all seconds are the same.” Cara Tweed turned in a committed performance of a work that much resembles the Scelsi — and shares with it the impression of overstaying its welcome.

Cinematographer Rebecca Rhodes deserves a virtual round of applause for wrapping a number of little scenes together into a cohesive presentation. A separate credit screen identified the composers of other bits of music used for titles and transitions.

Supported by engagingly, yet simple staging by Cara Consilvio, a well-prepared cast of singers told the archetypal story of Cinderella with charm and flair. Framing the production was  a sparse but colorful set and wonderful lighting by Dave Brooks. END_OF_DOCUMENT_TOKEN_TO_BE_REPLACED

END_OF_DOCUMENT_TOKEN_TO_BE_REPLACED

The music isn’t easy to play, either. Over the course of two hours, all of the musicians brought fantastic focus to the unrelenting tricky rhythms and countless layers of parts, all of which require a high level of individual responsibility. Even in the moments of calm, the accompaniment remains perpetually unsettled. Adams — who made a sprightly presence on the podium — combines minimalist, repeating motives in gradual layers, which eventually become so dense they overwhelm the senses. Lisa Wong deserves special mention for her thorough preparation of the Cleveland Orchestra Chorus, as does Jennifer Rozsa for the Children’s Chorus, which made a brief but memorable appearance in the last few minutes. END_OF_DOCUMENT_TOKEN_TO_BE_REPLACED