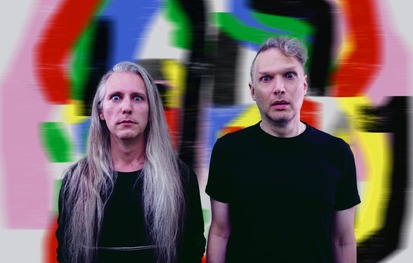 When composer/pianist Jerome Begin was in need of a pianist for a dance project he was working on, the Cleveland native was faced with a conundrum. “Being a pianist, I have never hired a pianist,” he said during a Zoom call.

After speaking to a number of acquaintances asking for recommendations, he decided to contact David Friend. “Jerome sent along some of the pieces and we set a time to meet at Juilliard where he teaches,” Friend recalled during that zoom conversation. “We played through some of the music and immediately everything felt great. And it’s continued to be a really good partnership.”

On Thursday, March 10 at the Bop Stop, David and Jerome will perform Post, a 50-minute set of pieces for solo piano with live processing that explore a different way of creating an uncanny valley-esque reality where human, acoustic and electronic- processed elements interact and overlap in hard-to-define, disorienting ways. The event, presented by No Exit, is free.

David Friend: Like many new pieces it has a circuitous path. Jerome has worked with a number of dance companies including the Brian Brooks Moving Company. Brian was creating an evening-length work and he commissioned Jerome to write the music, so the music was developed in tandem with the choreography. Once the decision was made to use solo piano, that’s when I came onboard.

As things came together, there was a workshop performance at the Harris Theater in Chicago, and ultimately, it had a run at the Joyce Theater in New York City.

MT: What made the two of you decide to turn it into a music-only project?

DF: After the run at the Joyce it became clear that the dance part was going to come to an end because there was no interest from Brian in taking the project further. That’s when Jerome and I started thinking about what’s next. How can we make the music survive?

So we decided to make an album. We started the recording process and began to be in touch with some record labels, but of course, the pandemic put everything on hold.

MT: Did the extra time work to your advantage?

DF: It turned into a silver lining because it became a second workshop period.

So much of this music is about finding the gray areas — the integration of the electronic processing and the acoustic sound of the piano. The two are so intertwined that it becomes difficult to tease out what is piano and what is processing. So having an entire extra year gave us time to think about the music and re-evaluate and tweak things.

Jerome Begin: As I was mixing the recording, we were able to take time between each session and listen to it — so often you don’t have that luxury.

MT: How much did the music change during this period?

DF: It did take on an imprint from that period. It was a profoundly strange time where we were living in isolation and out of necessity technology became even more interwoven into our lives at all levels.

It was interesting to reconsider the musical concepts while I was thinking about how technology was affecting my life — could I tell how my mom was feeling over Facetime? And as a result, I think this music carries a lot of emotional intensity around those issues.

MT: When I listened to it I was impressed by how the electronic lines grow out of the piano lines.

DF: The music does contain a lot of familiar piano tropes which are informed by the fact that Jerome is a very fine pianist.

JB: I played piano in a band as a kid and when I was thirteen I got my first synthesizer. so I have these two musical histories — one that is electronic and one that is more of a classical bent.

I’m also a composer who really loves limits — writing for a string quartet, there are things that can and cannot be done and those limitations are so valuable. But once you introduce electronics you literally have the entire library of recorded sound available to you. So the question becomes, where do you draw the lines?

When I was asking myself that question I thought: what if I tie the electronics really tightly to the sound of the acoustic instrument?

I use an iPad, but I am actually playing the electronic processing like an instrument. And the reason it moves with the music is because the piece is a duet.

DF: There are no external electronic sounds coming into the piece — it all originates from the piano. But by the same token, it also means that, as with conventional chamber music, we are responding to each other.

It feels like an advancement for electro-acoustic chamber music because it’s not only one component of the piece that has the capacity to come to life during a live performance. It’s more than just clicking a button and having a live performer play along with something.

MT: Jerome, how did you begin writing for dance?

JB: When I was at Ohio University I stumbled my way into the dance department as an accompanist — I needed a part-time job. But the fluke of finding that job led to an entire career of writing for dance and theater. And the bulk of my commissions have come from the dance world.

It’s been interesting writing for dance and theater because it has changed the way I think about writing music. There’s an inherent “theater” in the performance of music. I don’t mean theatrics or performing over-dramatically, I mean just the act of performing music is theatrical. That’s always in my mind. What are the players doing and what are the relationships onstage? What is the audience feeling just being in the room with the people playing?

MT: Do either of you have any final thoughts?

JB: I’m looking forward to the last piece of the puzzle, which is what happens to a work that was created as an album when you put it in front of a live audience? How does it change and what do you learn about the piece? We’re both really excited to find out.

Post will be released on New Amsterdam Records on March 25.