Although Erik Satie’s Vexations consists of a single page of manuscript, the composer included the following statement: “In order to play the theme 840 times in succession, it would be advisable to prepare oneself beforehand, and in the deepest silence, by serious immobilities.”

Beginning on Monday, April 4 at 8:00 pm in Cleveland State University’s Drinko Recital Hall, No Exit will present the first of three area concerts featuring Satie’s incomparable work. The concerts are the second installment in the ensemble’s year-long celebration of the music, mind, mirth and mayhem of the original musical Dadaist, who lived from 1866 to 1925. The program will be repeated on Friday, April 8 at SPACES and on Saturday, April 16 at Heights Arts. Both concerts will begin at 8:00 pm.

It was debatable whether or not Satie actually intended for Vexations to be performed 840 times until the 1960s — when scholars began to take the composer’s directions literally. The first performance of the work in this manner was on September 9, 1963 at the Pocket Theatre in Manhattan. Organized by John Cage and Lewis Lloyd, the marathon event lasted over 18 hours.

“Our performance will be 17 hours and fifty minutes shorter than the first,” No Exit artistic director Timothy Beyer joked during a recent interview. “It’s going to come in a bit under ten minutes.” While the 1963 performance was played by a tag-team of pianists, No Exit’s James Praznik has arranged Vexations for the full No Exit ensemble.

“We struggled with adapting a piece whose mere essence is so dependent on it being obscenely long. But there is a lot of good material in it, which was very good fodder for James’s structured improvisation. And while using a big ensemble is quite different from the original conception of the piece, we figured if we’re going to make it different we might as well make it really different.” 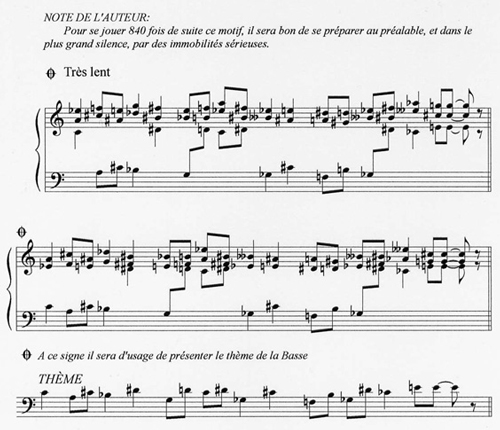 Beyer said that in an effort to present Satie’s music not just as a bit of history, but as part of a living legacy, the ensemble has commissioned six short piano pieces by composers Geoffrey Burleson, David Rakowski, Robert Honstein, Kevin Eppich, James Praznik, and Beyer himself.  “Each piece represents the individual composer’s personal take on Satie and how his influence has shaped that composer’s own musical universe, but we also told them that we wanted the pieces to represent their own musical voice,” Beyer pointed out. “That’s a tough thing to do, yet every work exceeded my expectations. Each piece is extraordinary, and they’re are all very different. No two are trying to hit the same nail.”

The program will also include Heinz Holliger’s first Duo for violin and cello (1982), the late French composer Georges Delerue’s Diptyque for solo flute, and the world premiere performance of Buck McDaniel’s Ride.