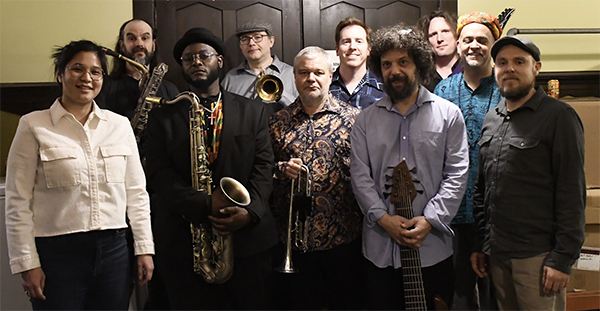 No Exit’s season-opening trifecta of concerts concludes on Friday, November 4 at 8:00 pm at the Bop Stop with the Genkin Philharmonic, a ten-piece electroacoustic chamber ensemble based in Buffalo. The concert is free.

Founded in 2000 by trumpeter Jon Nelson, the group was originally conceived as a class at the University at Buffalo — a class that would provide an opportunity to study and perform contemporary music that draws on multiple genres as well as improvisation. Today the Genkin draws its membership from a pool of musicians including UB Faculty and alumni, the Buffalo Philharmonic, and the Hallwalls Arts Collective.

What makes the Genkin Philharmonic distinct from most contemporary music ensembles is what they play. Their repertoire includes arrangements that preserve the technical virtuosity of music by the likes of Jimi Hendrix and Frank Zappa, the creation of original works by living composers, and arrangements of works from the classical canon that remain faithful to the composers’ scores.

“We’re kind of different from everything else out there,” Nelson said during a telephone conversation.

The group’s musical philosophy can be traced back to the Meridian Arts Ensemble, a brass quintet he helped found in 1987. “I was trained as a classical trumpet player, but I grew up listening to rock, jazz, and funk. But when you’re a trumpet player, you don’t study rock and funk, so I went to classical music,” he said. “As a trumpet player, there’s one portal to pass through and that’s orchestral playing.”

Nelson said that while he liked playing classical music and enjoyed hearing it, one thing he could not stand was counting rests. “It was the most horrible thing for me. I also feel like as brass players, counting rests is a waste of human capital.”

After experiencing a “crisis of conscience,” Nelson dropped out of school and began to “seriously think” about what kind of musical career he would have. “There were a bunch of us at school who felt that way, and that’s when we put the Meridians together,” he said. Forming the group was a “rebellious act,” he added, but they were determined to make a living at it

“We were a ragtag bunch — there was a point when we had long hair, some of us had earrings, and we wore whatever we wanted. But we performed pieces we had commissioned from Milton Babbitt, and we played Xenakis’s Khal Perr. We were making a statement about what brass music could be. It doesn’t have to sound nice all the time. It’s okay to be a little bit messy. Life is messy, the world is messy, and we wanted to perform music that reflected that.”

When asked what the audience can expect to hear on Friday, Nelson said that “it’s kind of like what you might have on your playlist at home.”

Staying true to the Genkin’s programming philosophy, the evening will include music by Jimi Hendrix (Purple Haze, Crosstown Traffic, and Third Stone from the Sun), Curtis Mayfield (Little Child Runnin’ Wild), and Frank Zappa (Big Swifty and The Black Page), as well as works by composers Caroline Mallonee, David Sanford, and Andrew Rindfleisch — plus transcriptions of Bartok’s Mikrokosmos and two movements from Prokofiev’s Scythian Suite.

“I love the Prokofiev and it doesn’t get played very often,” Nelson said. “When I make a transcription, I don’t deviate from the composition. I spent a long time on the second movement of the Scythian Suite and I didn’t leave out anything. It’s super dense but all the notes that are in the score are covered in our version.”

Nelson said that he looks forward to bringing the Genkin and the program to Cleveland, which he called his favorite place in the U.S. after Buffalo. “I’ve had a longstanding relationship with [No Exit artistic director] Tim Beyer and [Cleveland State University composition professor] Andrew Rindfleisch.

“The first time I was in Cleveland was I think seventeen years ago when Andrew invited me down to play Berio’s Trumpet Sequenza on a Cleveland Contemporary Players concert. Then he brought Meridian Arts Ensemble down for a week-long residency. And he brought the Genkin down about ten years ago. And a year ago the Meridian collaborated with the Factory Seconds Brass Trio [an ensemble made up of members of The Cleveland Orchestra]. They’re friends of mine, as is Jeff Scott, who is now at Oberlin. So yeah, Cleveland is great.”

Although forming the Meridian may have been an act of rebellion, Jon Nelson has gone on to have a long and fruitful musical career which includes teaching at the University of Buffalo. “It’s been 22 years — they haven’t asked me to leave yet,” he said. “Being at a research university, I get to be in contact with students who are pursuing all kinds of academic majors. And that’s very interesting to me, especially working with engineers who are also very serious about their music. So the Buffalo job has been good to me and I really enjoy the students. It also affords me time and space to put together projects like the Genkin.”

Click ;;here for a printable copy of this article

END_OF_DOCUMENT_TOKEN_TO_BE_REPLACED

Supported by engagingly, yet simple staging by Cara Consilvio, a well-prepared cast of singers told the archetypal story of Cinderella with charm and flair. Framing the production was  a sparse but colorful set and wonderful lighting by Dave Brooks. END_OF_DOCUMENT_TOKEN_TO_BE_REPLACED