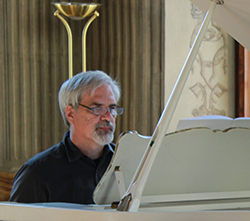 Nicholas Underhill’s solo piano recital at Heights Arts on Saturday, June 2 featured a complex program by 20th- and 21st-century composers who seemed to be attempting to dismantle tonality. A member of No Exit, Underhill played eight compositions that he worked on for over a year. The concert was part of the ensemble’s summer series.

The gallery setting was small and intimate, with the piano situated in front of the art as if on display. This casual atmosphere gave the music a more accessible feeling despite its cerebral nature — almost as if it could be purchased and taken home like the art on the surrounding walls.

The modern quality of the concert was felt not only in the music but in the setting and the fact that Underhill was playing from an iPad. The pianist made the audience feel involved as he informed us about every selection — though it wasn’t difficult to hear common elements of dissonance, arhythmic phrases, and atonal masses of notes throughout. He said that the program included some of his favorite works: Copland’s Piano Variations (1930), and selections from Gary Philo’s Five Impromptus (2016) and David Leisner’s Labyrinths II (2009).

Underhill began with The Dark Net, one of his own pieces from 2016. Before taking the bench, he described the work as “vampire music,” meant to be “dark and mysterious” as the title suggests. It begins with spiraling, swirling notes, anchored by a few warm chords. Underhill’s phrases were evenly accented, remaining at a fairly steady tempo and resonant volume throughout. Amidst the whirl of notes a theme emerges, twirling up the keyboard to rest on two high notes that end the piece.

Next was Iannis Xenakis’ Mists (1980), which Underhill described as “one of the most intellectually complicated pieces written” because of the complex grid used to compose it. As the title says, the work is meant to evoke mists rolling across the water in an impressionistic manner similar to that of Ravel. While the harsh notes rapidly scrambling up the keyboard demand attention, they were at times too bright to feel like a haze. However, the rolling lines have a purposefully random quality that draws the listener in and holds one’s interest for all 12 minutes of the piece.

Though the evening was not meant for easy listening, Underhill did sprinkle some more melodic and agreeable compositions into the program to disrupt the maniacal atonality of works such as Wild Men’s Dance (1913) by Leo Ornstein. Underhill described Morton Feldman’s Piano Piece (1956) as getting a fortune cookie when you were expecting a four-course meal at a Chinese restaurant. The metaphor, although not complimentary towards Feldman, was accurate in depicting the hesitant notes and deliberate pauses that made it feel like an amuse-bouche easing the audience back into listening.

Frederic Rzewski’s Winnsboro Cotton Mill Blues (1979) is meant as a tribute to the working class, as demonstrated in the rapid low notes, reminiscent of a machine, becoming thicker in texture as notes are added. A four-chord blues progression becomes more prominent as the piece goes on, but then dissolves into loud chords. Underhill kept the underlying rhythm steady despite its fast repetition, and his hand crossings added to the drama. The physical exertion required to perform the work was evident when he stood up to bow, breathing heavily.

Underhill ended the evening with a bright, humorous encore “in honor of my kitty cat, Nibbles.” Kitten on the Keys by Zez Confrey showcased his talent, his appreciation of ragtime, and his sense of humor all at once. The energy during the second half of the concert was infectious, and the audience clearly enjoyed the encore, as well as the evening as a whole.

END_OF_DOCUMENT_TOKEN_TO_BE_REPLACED

Franz Welser-Möst led the final bows on Saturday night at Severance, like the star of any show should. The Cleveland Orchestra’s music director is in his element presiding over the ensemble’s annual opera production, which this season packs the drama. Verdi’s Otello — in a concert staging that opened May 21 and runs for two more performances (May 26 and 29) — demands big voices, instrumental forces to match, and a conductor who can give it all shape and direction. END_OF_DOCUMENT_TOKEN_TO_BE_REPLACED

The cimbalom was the feature of the show, an instrument capable of taking on many personas. Its performer, Chester Englander, has shaped his career around the instrument, and has inspired composers to write more repertoire for it, some of which was presented on the program. END_OF_DOCUMENT_TOKEN_TO_BE_REPLACED