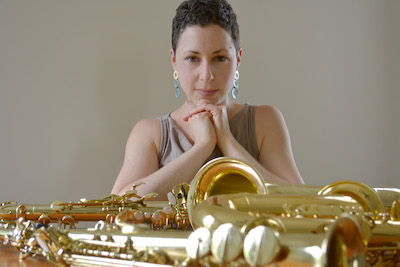 Although saxophonist Noa Even has spearheaded many commissioning projects for her duos Ogni Suono and Patchwork, she had not commissioned one for herself. That was until events surrounding the 2016 presidential election got her thinking about how humans connect to one another.

On Thursday, December 12 at 7:00 pm at Snap House Studios, Even will give the first Cleveland performance of Atomic, which features four solo works for saxophone, interactive electronics, and video that explore themes of human connection. The event is part of fp Creative’s concert series. As always, admission is a sliding scale: $0-$15 (at the door). RSVP here.

Even, who co-founded the Cleveland Uncommon Sound Project (CUSP) and serves as assistant professor at Kent State University, where she teaches saxophone and co-directs the school’s New Music Ensemble, said in a recent interview that she did not give any stipulations to the composers other than that the works should explore the broad topic of human connection. “Some people chose social justice themes and others chose themes that are more personal to them.”

Imprints in Time by Christopher Biggs (music and video) reflects on how people are connected through their interactions with one another. “Christopher teaches at Western Michigan and I met him a year and a half ago at the Splice Institute that he runs. He approached me about writing a piece for saxophone, electronics, and thunder tube, a percussion instrument that’s going to be inside my bell.”

In their program notes for bodies immutable, composer LJ White and programming and video artist Jason Charney write that the work

is inspired by the increasingly visible and thriving transgender community in the US… The piece’s musical concept reflects this proliferation of transgender existence and the ways in which the presence of one trans person allows for others to live openly and authentically.

“I’ve known LJ since high school music camp back when LJ was Liza White,” Even said. “In addition to the video, Jason also did all of the programming and patching for the electronics, so they worked closely together to make the piece work. It has an improvised section in it because that’s something that I am becoming more interested in incorporating into commissions.”

“Emily is a professor at the University of Georgia and she’s written a few pieces for saxophone — I really enjoyed her piece for baritone sax,” Even said. “The theme Emily chose was immigration law and how it was changing after Trump became president. I then approached Michiko because she has been an immigrant twice, having moved from Japan to the U.S. and then to Germany. The three of us collaborated very closely. I’m an immigrant too, but I was so young that it doesn’t affect me as much as it does them.”

The desire to turn back time and alter the past is at the fore of Do I Regret? by composer José Martínez with video by Michael Bruner. “I met José at the Splice Institute,” Even said. “As the title says, it is about regret and the ability we wish we had to change the past. The video clips are from my memory of my childhood in Israel and Boston.” The work also incorporates improvisation. “I have three improvs that are sampled and brought back again, so I get to manipulate my memories by using a mini mixer.”

Even said that Atomic has been an important project in her development as an artist. “It’s been an adventure in dealing with technology and understanding how tricky it can be to have this many pieces that use different [electronic] programs — and to be able to perform while navigating that technology. To have a project that is all my own is a different animal from commissioning chamber music.”

END_OF_DOCUMENT_TOKEN_TO_BE_REPLACED

Supported by engagingly, yet simple staging by Cara Consilvio, a well-prepared cast of singers told the archetypal story of Cinderella with charm and flair. Framing the production was  a sparse but colorful set and wonderful lighting by Dave Brooks. END_OF_DOCUMENT_TOKEN_TO_BE_REPLACED