When the opera opens, August Neuber (a farmer and mayor of the village of Schoenberg) and his wife Elise have come to understand Hitler to be a dangerous and dishonest fraud. They have isolated themselves and their children from Nazi social activities, and Christa, their daughter, cannot understand why her parents will not allow her to play with the other girls in the village. Click here to read a synopsis. Watch a short video of Sonntag describing the piece here.

“The daughter Christa is my mother-in-law,” Sonntag said. “When she told me this story I had been living in Germany, so I knew from conversations that in the beginning many people thought that Hitler was this great leader who was going to bring economic prosperity to Germany. He was also going to reunite East Prussia,  which had been separated from the rest of the country after World War I, with the rest of Germany.”

Sonntag said that it was when Christa’s father, August, was sent to Ukraine to survey land that his feelings about the Nazi party began to change. “He realized it was land that had been taken away from the people who lived there, and that the Nazis were planning to uproot the poor farmers from Schoenberg and send them there to farm it. He also realized that many Jews were disappearing from the area. August, like so many people, was a member of the Nazi party and had supported it. But when he saw what was going on, he said no and became a resister, first by refusing to wear his uniform to a local Nazi rally. And then his wife Elise allowed Hedwig, the young Jewish-Ukrainian girl, to sleep in the house and eat with the family.” 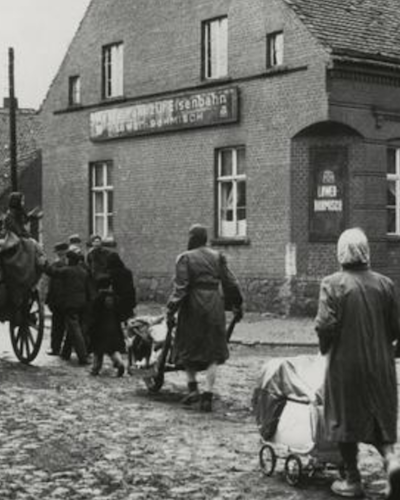 Sonntag’s interest in the subject also stems from personal experience: growing up in in Milwaukee as a German-American, she was taught about the Holocaust at a young age. “It was important for us to know that it was the bad Germans who were the Nazis,” Sonntag said. “My father was the principal at the Lutheran School I attended, and he showed films about the Holocaust to my eighth grade — nothing was hidden from us.”

Immigration is another interest of the composer. She grew up hearing stories about her family — one side came to the U.S. in the 1850s and the other in the early 1900s. Sonntag also lived in Germany for nine years while pursuing a freelance career in Frankfurt and studying philosophy and German (University of Heidelberg) and music (Hochschule für Kirchenmusik, Heidelberg). When she returned to the States she said she had to “re-integrate” herself, and see her own country through the eyes of an immigrant.

When Sonntag began creating the libretto for Verlorene Heimat, she benefited greatly from her mother-in-law’s large library, including biographies and autobiographies about refugees from Eastern Europe and Holocaust survivors, and books about the history of East Prussia. “I had a lot to read, and over the next two years I’d call her and ask if she remembered how this or that happened.”

Sadly, Christa Neuber Kuske was never able to see her life story presented on the stage. “I had hoped to have it finished so she could, but in April of 2012 she was diagnosed with lung cancer, although she never smoked. I visited her in August in Germany, and she spent every ounce of her energy going through letters and old newspaper articles with me because she wanted to help. She actually died two weeks later, and right after that I started composing the opera.”

Supported by engagingly, yet simple staging by Cara Consilvio, a well-prepared cast of singers told the archetypal story of Cinderella with charm and flair. Framing the production was  a sparse but colorful set and wonderful lighting by Dave Brooks. END_OF_DOCUMENT_TOKEN_TO_BE_REPLACED

END_OF_DOCUMENT_TOKEN_TO_BE_REPLACED

The music isn’t easy to play, either. Over the course of two hours, all of the musicians brought fantastic focus to the unrelenting tricky rhythms and countless layers of parts, all of which require a high level of individual responsibility. Even in the moments of calm, the accompaniment remains perpetually unsettled. Adams — who made a sprightly presence on the podium — combines minimalist, repeating motives in gradual layers, which eventually become so dense they overwhelm the senses. Lisa Wong deserves special mention for her thorough preparation of the Cleveland Orchestra Chorus, as does Jennifer Rozsa for the Children’s Chorus, which made a brief but memorable appearance in the last few minutes. END_OF_DOCUMENT_TOKEN_TO_BE_REPLACED