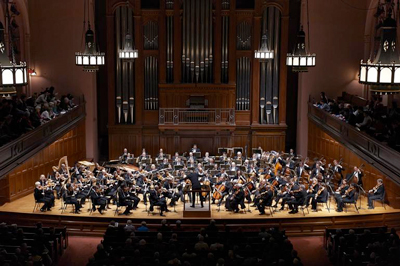 On Saturday, September 17 at 8:00 pm, the Artist Recital Series will kick off the 2016-2017 season with a performance by genre-versatile clarinetist Eddie Daniels. Known for performances in both the jazz and classical worlds, Daniels will be joined by his longtime jazz companions: bassist Darek Oles, pianist Alan Pasqua, and drummer Joe LaBarbera.

Lin noted that in addition to Eddie Daniels, this season’s highlights include the charismatic virtuosity of the Zukerman Trio, the theatrical celebration of Bach’s genius by the Toronto-based Tafelmusik baroque orchestra, and Beethoven-inspired programs by the St. Lawrence String Quartet — featuring iconic composer John Adams’s own tribute to the master — and by the consummate pianist and interpreter Richard Goode.

“Once again, we’re fortunate to have The Cleveland Orchestra return to Finney Chapel for our season finale — this time with conductor Andrew Davis, showcasing principal cellist Mark Kosower and principal oboist Frank Rosenwein as soloists.”

The full schedule is below. Click here for ticket information.

EDDIE DANIELS, clarinet, Saturday, September 17 at 8:00 pm
Versatile clarinetist Eddie Daniels is known for performances in both the jazz and classical worlds. He will be joined by bassist Darek Oles, pianist Alan Pasqua, and drummer Joe LaBarbera.

ST. LAWRENCE STRING QUARTET, Friday, November 11 at 8:00 pm.
Celebrated for its “smoldering intensity” by The Washington Post, the St. Lawrence Quartet will share a program that spans all eras, featuring Haydn’s String Quartet in f, Op. 20, No. 5; Beethoven’s String Quartet in a, Op. 132; and John Adams’s Second Quartet.

TAFELMUSIK, Tuesday, February 28 at 8:00 pm
One of the world’s top Baroque orchestras, Tafelmusik performs J.S. Bach: The Circle of Creation, a multimedia presentation combining text, music, video, and images to celebrate the genius of Bach — performed entirely from memory.

RICHARD GOODE, piano, Sunday, April 9 at 4:00 pm
Acknowledged worldwide as a leading interpreter of Classical and Romantic music, Goode will perform an all-Beethoven solo piano recital spanning the composer’s three style periods. The program includes the three early Bonn-period Op. 10 sonatas; the somewhat neglected middle-period Op. 54 sonata in F, composed around the same time as the famous “Waldstein” and “Appassionata” sonatas; and the late Op. 101 sonata, which is at turns mystical, sober, and intense.

END_OF_DOCUMENT_TOKEN_TO_BE_REPLACED

Supported by engagingly, yet simple staging by Cara Consilvio, a well-prepared cast of singers told the archetypal story of Cinderella with charm and flair. Framing the production was  a sparse but colorful set and wonderful lighting by Dave Brooks. END_OF_DOCUMENT_TOKEN_TO_BE_REPLACED