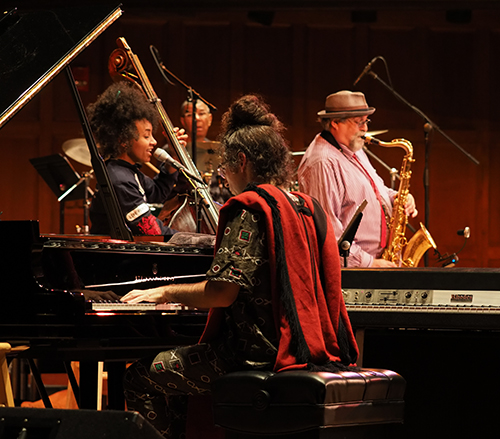 The Spring Quartet — bassist and vocalist Esperanza Spalding, saxophonist Joe Lovano, drummer Jack DeJohnette, and pianist Leo Genovese — was warmly welcomed to the Finney stage by a sold-out audience on April 17. The show, part of the Artist Recital Series and the 30th anniversary of Oberlin’s Jazz Studies program, started with a fitting tune titled Spring Day written and led by Lovano. Each player was individually brilliant in personal style, and yet they also melded seamlessly into a powerfully dynamic quartet.

Genovese took the first solo after the head of Spring Day, balancing his left hand in unison with Spalding’s bass line, his right hand tickling the keys of the upper region of the piano. His right hand led us through a series of twists and turns, loopholes opening and closing, as his melodies guided us through the intricate maze of his improvisation. Solos taken throughout the concert were lengthy, allowing each musician to fully flesh out their musical ideas without feeling rushed.

As Spalding took the improvisational torch from Genovese, her solo showcased both her technical fluency on the bass as well as her bold musical choices — often ending an impressive tour of the fingerboard on a low, dissonant note before starting a new phrase. She started off the second tune, DeJohnette’s Herbie’s Hands Cocked, with an arpeggiated, repetitive motif reminiscent of rolling waves. Later, Lovano’s solo seemed to fly away, bringing the audience with him as if the string of a helium balloon were tied to our fingers, pulling us up between the clouds and swirling around the sun. Finally, Spalding and Genovese brought us back to the ground with the same underlying motif that started the tune. 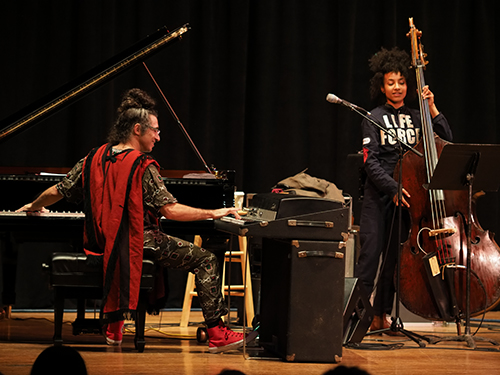 On the fifth tune of the night, Spalding’s Work Of Art, we were finally treated to her singing.  She began the tune alone, her voice buttery but with grit at the same time, and after a few lines the band joined in, embracing and gently supporting her voice. While she needed both hands to play, she found opportunities to use them to communicate and express cues, emotion, and pleasure between notes or phrases.

Thus far we had only heard snippets of DeJohnette’s expertise as he interjected comments here and there in response to the other soloists. Finally, on Bathtime Magician, the audience was treated to a drum solo that started off the tune. Not only did he play with rhythm, but with time, music, and space as well. Hands down the best drum solo I’ve ever witnessed. Not one moment was I left wondering when it would end as he orchestrated the solo, complete with multiple voices in conversation with one another, creating an illusion of a full band. I didn’t realize how entranced I was until the rest of the group came in, pulling me back into reality. I got the drum solo I was waiting for, and it was better than I could have imagined. 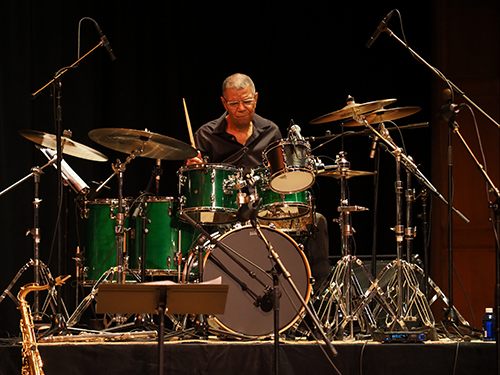 During the pianist’s solos, he expertly slipped in and out of classical techniques and phrases, showcasing his training and melding the genres together. The quartet left us with an upbeat tune called Song for World Forgiveness, and I think we all tried our best to hold onto every last morsel of sound before the night was over. Each performer truly gave it their all on this last tune and the pure joy of playing was palpable in the room. I highly recommend these musicians, if you have the opportunity to hear any of them live.

Nia Burger, a fourth-year student at Oberlin College in Gender, Sexuality & Feminist Studies, and a member of the Practicing the Art of Music Journalism class taught by Mike Telin and Daniel Hathaway, has studied Gypsy jazz, Delta blues, and classic rock. This review is reprinted from the Oberlin Musical Journal.

END_OF_DOCUMENT_TOKEN_TO_BE_REPLACED

The strings-only work by Berg has made relatively frequent appearances on the Orchestra’s programs. In 2021, the musicians recorded it for the In Focus series, and it appeared again on last year’s European tour. Friday’s rendition maintained the group’s characteristic light and effortless playing, each section blending as much as possible to echo the work’s original form as a string quartet. At fifteen minutes total, the piece is quite short, but the dense encoded musical meanings require some extra-attentive listening. Splitting up the three movements ensured that each one could be appreciated on its own. END_OF_DOCUMENT_TOKEN_TO_BE_REPLACED