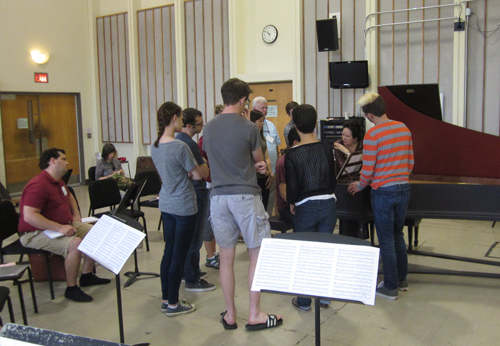 At BPI, as elsewhere in the musical universe, master classes are the principal conduit for transferring wisdom from teachers to students. Rather than just dryly lecturing on abstract topics, distinguished musicians use performances of selected works as the springboard for discussions of matters both wide and narrow.

Harpsichord master classes on Monday with Lisa Goode Crawford, Mark Edwards, and Mitzi Meyerson offered a long list of takeaways, but also introduced BPI’s 22 harpsichordists to the unique personalities of their mentors

Crawford urged the first performer, who played an arrangement of an overture by Balbastre, to be an actor and make the character of the piece more obvious with rhetorical gestures. The normally soft-spoken Meyerson echoed that advice, urging the player to embody the scary mood of the piece. “This should say, ‘Don’t mess with me!’” She suggested her “smash technique” for setting up the emotional mood of the movement — play dramatic clusters with open hands rather than notes — and advocated watching soap operas in a language you don’t speak to experience non-aural emotional clues.

The issue of transforming piano technique to the harpsichord came up in a Bach Prelude full of sixteenth notes. Edwards introduced the 18th century idea of “ordinary touch” by having his student play a whole scale with only her middle finger, (“Don’t hop between notes — sing the scale”) then transfer that idea into all her fingers.

In a performance of a suite by J.K.F. Fischer, Crawford noted that the structure of the Courante was more important than the notes, adding that all the student’s eighth notes sounded the same and therefore the movement had no dynamics. Edwards urged the performer to engage more with the harmony of the prelude — the piece is really just arpeggiated chords — to point up dissonance and show the composer’s harmonic intentions.

Mitzi Meyerson began her Tuesday morning harpsichord class by herding everyone into a circle for a communication exercise. Person one was asked to turn to person two and say “I don’t know” with a certain emotional inflection. Person two was to describe that emotion to person one to see if person one’s body language matched his vocal tone and the feeling was communicated — and so on around the circle. If not, that would be an example of “inappropriate affect,” a principle applicable to the communication of a piece of music.

Meyerson went on to recommend the Alexander Technique to a student who demonstrated back tension while playing; counseled students not to do the same thing all the time (e.g. playing several identical trills in a row); invoked her now famous “smash technique” to correct the rhythm of dotted notes; and noted that the most important thing in Baroque music was harmony, harmony, and harmony. She suggested reducing every solo piece to a continuo part to figure out its harmonic structure.

Tuesday’s mid-afternoon concert in Fairchild Chapel featured violinist Julie Andrijeski and organist and harpsichordist Joe Gascho in music from the late 17th century — a fascinating period of experimentation. Music by Johann Schop and Johann Heinrich Schmeltzer were the rarities. More familiar pieces by Sweelinck and Buxtehude were enlivened by the meantone temperament of the Brombaugh organ and the lovely baby-blue hues of a recently acquired harpsichord. Andrijeski adroitly handled the challenge of playing at an uncomfortably high pitch due to the ambient temperatures, and the duo played off each other’s cues with a superb sense of style and communication.

Northeast Ohio’s Les Délices has long been that rarest of beasts: a world-class organization so proud of its region (ours) and repertoire (distinct niches in pre-1800 music) that it never tries to be everything to everyone, paradoxically making a strong case for a broad, curious international following. In the December episode of its SalonEra series, the ensemble embraces its strengths and community to marvelous effect. END_OF_DOCUMENT_TOKEN_TO_BE_REPLACED

END_OF_DOCUMENT_TOKEN_TO_BE_REPLACED

Another I remember fondly is Gian Carlo Menotti’s Amahl and the Night Visitors.  Commissioned by NBC, the one act, made-for-television opera, premiered on December 24, 1951, at the network’s studios in New York’s Rockefeller Center. And now, through the wonders of technology, Cleveland Opera Theater has created a magical new production of the work which is available on demand through January 6, 2021 (Three Kings Day). END_OF_DOCUMENT_TOKEN_TO_BE_REPLACED

Jessen has now followed up with her second solo CD, Winter Chapel. Recorded on January 17, 2020 in Oberlin College’s Fairchild Chapel and available on Carrier Records, the album is a continuum in Jessen’s journey to push the musical boundaries of her instrument and herself as an improviser. END_OF_DOCUMENT_TOKEN_TO_BE_REPLACED