Before that, most of the 16 ensembles who would play on the second part of the event in Kulas Hall got a 15-minute dress rehearsal — really more of a sound check — onstage. That necessitated a number of furniture moves by the agreeable and accommodating stage crew, and not in the same order as the concert itself.

In the case of my ensemble, the only one that required two harpsichords, instrument No. 2 wouldn’t be available until the performance. That was fine for the Handel Passacaille (only one keyboard involved, as pictured below), but for the Mouret Suite de Symphonies — Prémière Suite, I shook hands with my instrument for the first time at the concert. 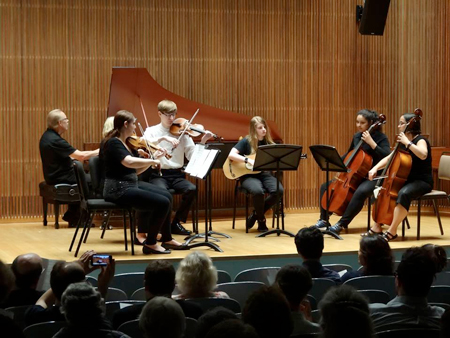 At 1:30, conductor Joseph Gascho explained that the Student Orchestra and Choir would be following George Frideric Handel’s travels around Europe through three brief works. Friedrich Wilhelm Zachow’s Sonata from Ruhe, Friede, Freude und Wonne represented Handel’s teenage years in Halle, when Zachow was his first teacher. The Sinfonia from Agrippina was written in Italy during Handel’s early 20s. And his Te Deum in A (from which Gascho excerpted the final chorus, “We believe that Thou Shalt Come to be Our Judge”) dates from his maturity in London in the mid-1720s. 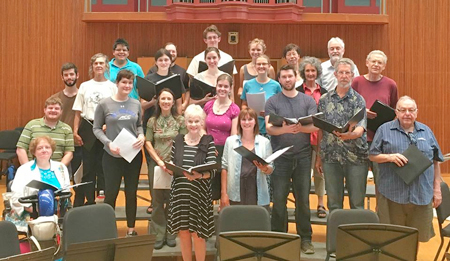 The orchestra played with verve and subtle expressiveness, and the choir of 22 voices made an impact well beyond its size, joined by soloists Bob Brooks (bass) and James Westerfield (countertenor).

Then the marathon session began in Kulas, continuing nearly until 6:00 pm, with two intermissions (during the first, the audience was invited to come next door to Central 25 to hear the beginning viol class in two selections). 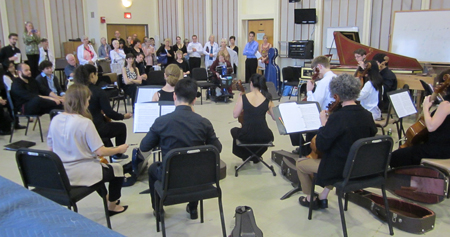 In addition to eight works by the ever-fruitful Telemann, there were interesting pieces by other composers on the docket, including such rarities as Johann Heinrich Schmelzer’s Lamento sopra la morte Ferdinandi III and Sonata a tre violini, and Unico Wilhelm van Wassenaer’s Concerto Armonico 1.

More mainstream but no less colorful were pieces like François Couperin’s La Sultanne. And it was fun to hear two Handel Italian duets the composer found useful for recycling when he was writing Messiah.

A steady parade of musicians moved between Kulas and Central Room 25 as audience members became performers, then returned to the audience again. Absent a musical track, perhaps the story is best told through a photo collage: 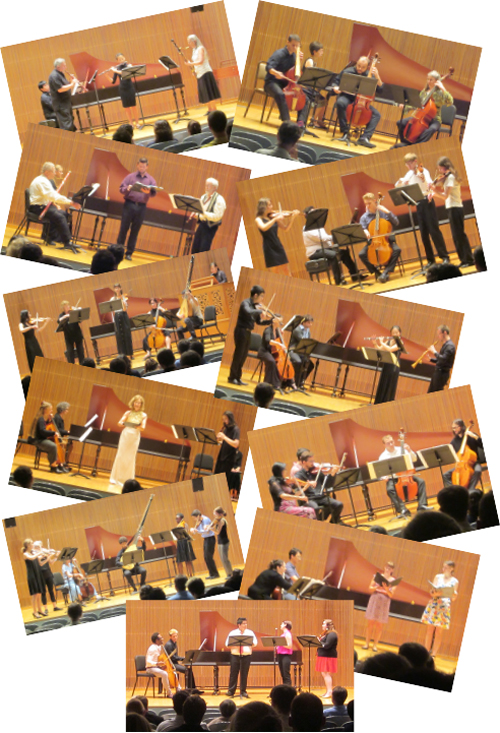 An hour after the last cadence was sounded, BPI 2017 ended with an informal, bring-your-own victuals picnic at Catharina Meints’ futuristic house not far from the Conservatory — an opportunity to exhale and share some downtime with colleagues and new friends before heading home.

Tomorrow I’ll wrap up this chronicle with some final reflections on the experience of being embedded in BPI for two weeks as a harpsichord student.

Jackson began the program with a recitation of Langston Hughes’ poem “Helen Keller” — the first of five poems by Hughes that served as interludes between each piece on the first half. END_OF_DOCUMENT_TOKEN_TO_BE_REPLACED

Pianos with pins and tape on strings, a bass drum and tam tam, crotales, Almglocken, and vibes. Microphones were hooked up all around the instruments. The feed was sent to speakers around the room. Lighting designer Nicholas Houfek hung incandescent globes over the arrangement of instruments from thin black wires stretching across the beams. END_OF_DOCUMENT_TOKEN_TO_BE_REPLACED

From the podium, Elim Chan set an ambitious tone for the evening. The rising star conductor, here in her Cleveland Orchestra debut, has a commanding style, and every twist and turn in Saturday’s performance tracked closely with her baton. END_OF_DOCUMENT_TOKEN_TO_BE_REPLACED