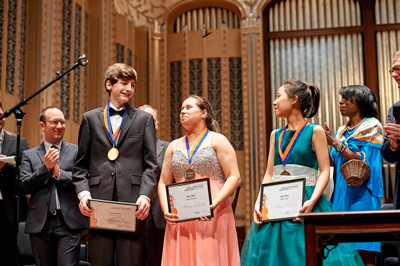 Because five out of the ten contestants who played the concerto round in last week’s Thomas and Evon Cooper Violin Competition at the Oberlin Conservatory of Music had chosen the Tchaikovsky concerto, the odds were that we might have heard two if not three Tchaikovskys on Friday evening in Severance Hall, when the finalists played with Jahja Ling and The Cleveland Orchestra. Happily for the audience, it turned out that there were three different concertos on the program — Glazunov, Shostakovich and Brahms — and all three performances were superb.

15-year-old Belle Ting of Taipei, Taiwan won the toss to play first, turning in a lyrical and scintillating performance of the rarely-heard Concerto in a minor by Alexander Glazunov. Though physically petite, Ting projected a rich tone in her lower register, and showed impressive agility in complex passages. Though occasionally masked by the orchestra (Glauzonov wrote for a large ensemble and didn’t thin it out very often), Ting explored a whole palette of colors. Her stage presence was as charming as her violin playing (she shook hands not only with the first stand of violins but also with Ling before she performed).

Had he played from behind a curtain, you wouldn’t have believed that Joshua Brown (from Gurnee, Illinois) was only 15. His interpretation of Dmitri Shostakovich’s first violin concerto was so maturely wrought that it might have come from a seasoned professional. Brilliantly played and expertly paced, Brown’s performance checked into every emotional corner of a work that includes long, bleak elegies, wild Klezmer-like outbursts, a super-serious Passacaglia and a cheeky Burlesca. Never losing control and producing a consistently handsome tone, even when muted, Brown was spellbinding throughout his entire time on stage. Ling and the Orchestra followed him closely, and if a few details went awry, it was difficult to believe that this concerto could have been put together on so little rehearsal. Brown received an enthusiastic standing ovation — and some of the audience wanted to applaud early, after the Scherzo.

18-year-old Gallia Kastner from Arlington Heights, Illinois, took on the Brahms concerto, the weightiest and longest piece of the evening, demonstrating the strong, colorful tones she can draw from her violin and her impressive stamina over the course of a demanding piece. The Orchestra’s winds set her up for her alluring lyrical lines in the slow movement with a gorgeous prelude, and except for losing a bit of forward movement in the finale, Kastner, Ling, and The Cleveland Orchestra brought the concerto to a thrilling conclusion. Among the impressive features of her playing was her faultless intonation. During a callback to the stage, Kastner signaled oboist Jeffrey Rathbun to stand for a well-earned bow for his own solo work.

In the end, when the jury’s numbers were crunched, Ting and Kastner split the top prize, and Brown came in second. No third prize was awarded. Whatever you think of the eventual outcome, this year’s Cooper’s talent was extraordinary, and the three who eventually made it to Severance Hall truly deserved to play with The Cleveland Orchestra.

END_OF_DOCUMENT_TOKEN_TO_BE_REPLACED

The strings-only work by Berg has made relatively frequent appearances on the Orchestra’s programs. In 2021, the musicians recorded it for the In Focus series, and it appeared again on last year’s European tour. Friday’s rendition maintained the group’s characteristic light and effortless playing, each section blending as much as possible to echo the work’s original form as a string quartet. At fifteen minutes total, the piece is quite short, but the dense encoded musical meanings require some extra-attentive listening. Splitting up the three movements ensured that each one could be appreciated on its own. END_OF_DOCUMENT_TOKEN_TO_BE_REPLACED