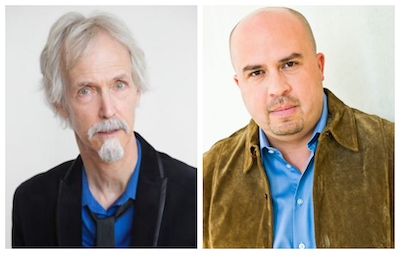 If you’re looking for some extra laughter in your life, Oberlin Opera Theater has the perfect ticket when they present the Oberlin premieres of a pair of one-act comedies.

Romance and deception will take center stage in Offenbach’s Le mariage aux lanternes (“The Wedding by Lantern Light”) and Rossini’s L’occasione fa il ladro (“Opportunity Makes the Thief”), both sung in the original languages with English supertitles. Jonathon Field directs and Joseph Mechavich conducts the Oberlin Orchestra. Performances take place on November 10, 11, and 12 at 8:00 pm and November 13 at 2:00 pm at Hall Auditorium. Click here for tickets.

Simply put, the Offenbach is a love story with songs that everyone will enjoy, and the Rossini is a comedic farce during which identities and affections are swapped between two pairs of would-be lovers.

During a recent conversation with the stage director and the conductor, Jonathon Field said the Offenbach is about a couple who are working on a farm. “They are in love with each other but the guy can’t acknowledge it. Eventually they do discover each other through the help of an uncle who sends them letters saying that they will find what they are looking for beneath this big tree.”

Field said the Rossini centers around two travelers with identical luggage. Of course the luggage gets switched, and when it is discovered, the baritone decides to assume the identity of the tenor, who is going to meet his fiancé for the first time. “To make things more complex the fiancé has decided that she doesn’t want to get married to someone she doesn’t know. So she switches roles with her maid in order to observe him from a distance. So you have two people who are somebody else, introducing themselves to two people who are somebody else. It’s a case of double identity.”

Joseph Mechavich pointed out that musically, the operas are grounded in the bel canto style, which celebrates the singer-actor and vocal pyrotechnics. “Rossini was the Jennifer Higdon, Jake Heggie, and Kevin Puts of that time — composers who write for the audiences of their day. And both works cater to the early 19th-century middle class, who wanted to be entertained by going to the opera.”

While both operas are from the 1800s, their messages are relatable to a 21st-century audience. “The relevance of the Offenbach is that you have something that you become so accustomed to that you take it for granted,” Field said. “As human beings we do that all of the time. The Rossini is a bit different but is still relevant today because the lead character, the baritone, is a Bugs Bunny kind of character — he’s kind of a trickster.”

Mechavich agreed with everything Field said, adding, “When I go to the theater I want to have a good time. The Offenbach is just giggling fluff, and laughing together is what we want to do as a community. It’s the same with the Rossini — having a great time communally. It’s magical and that’s what these pieces are. And It’s important to remember that we are in the entertainment profession — we need to make sure that people enjoy themselves.”

Supported by engagingly, yet simple staging by Cara Consilvio, a well-prepared cast of singers told the archetypal story of Cinderella with charm and flair. Framing the production was  a sparse but colorful set and wonderful lighting by Dave Brooks. END_OF_DOCUMENT_TOKEN_TO_BE_REPLACED

END_OF_DOCUMENT_TOKEN_TO_BE_REPLACED

The music isn’t easy to play, either. Over the course of two hours, all of the musicians brought fantastic focus to the unrelenting tricky rhythms and countless layers of parts, all of which require a high level of individual responsibility. Even in the moments of calm, the accompaniment remains perpetually unsettled. Adams — who made a sprightly presence on the podium — combines minimalist, repeating motives in gradual layers, which eventually become so dense they overwhelm the senses. Lisa Wong deserves special mention for her thorough preparation of the Cleveland Orchestra Chorus, as does Jennifer Rozsa for the Children’s Chorus, which made a brief but memorable appearance in the last few minutes. END_OF_DOCUMENT_TOKEN_TO_BE_REPLACED