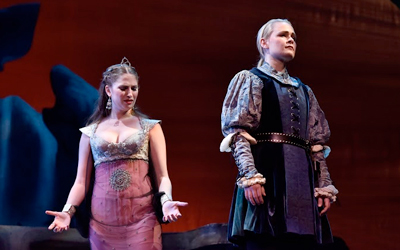 “There’ve always been stories about the young soldier who leaves his native country to go fight in a distant land but then becomes immersed in that land’s culture, and for whatever reason loses himself and his purpose,” Oberlin Opera Theatre Director Jonathon Field said during an interview. “That’s exactly what happens in Alcina — you have Ruggiero, who flies on a griffin onto this island and becomes enchanted with the sorceress Queen Alcina.”

On Wednesday, March 9 at 8:00 pm in Hall Auditorium, and continuing on Friday and Saturday at 8:00 pm and Sunday at 2:00 pm, conductor Christopher Larkin will lead the Oberlin Chamber Orchestra and two all-star casts in Handel’s fantastical opera Alcina.

Field admitted that the plot is a little crazy. “Alcina rules by magic and she bewitches her suitors into believing that her island is a place of their dreams. And when she becomes tired of them, she turns them into flowers, kind of like a garden of ex-boyfriends. Her downfall comes when she really does fall in love with Ruggiero.”

The origins of Riccardo Broschi’s libretto can be found in the 16th-century epic poem Orlando Furioso, which Field described as a “long, complex tale about The Crusades. So I’m setting the production in a late medieval, early renaissance time. The set itself is a floating isle that we’re calling Fantasy Island, which will evoke the opera’s otherworldly vibe.”

Soprano Olivia Boen, who will perform the role of Alcina, said there are many different ways to approach the character. “She is so complex. I think she is incredibly insecure and has a need for control. On some level she can’t trust the world around her without magic — the way she or her island look, or how anyone feels about her. At her core she wants to be loved, and I think she does love Ruggiero. But what most of us would consider real love is something that she cannot conceptualize because she is so afraid of it. In the end she becomes vulnerable to the most powerful thing in life, which is love.” 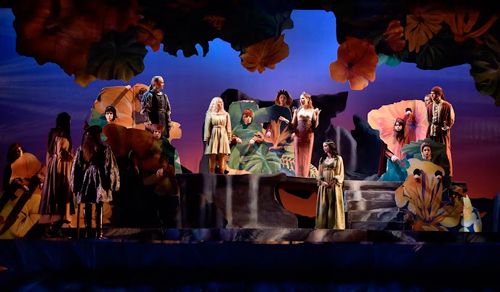 Mezzo-soprano Siena Miller, who will perform the role of Ruggiero, said that she finds her character to be fascinating. “At the beginning he is under the spell of Alcina. You can relate because when you are in a relationship, sometimes you’re so madly in love that you can’t see anything else. But Alcina completely takes advantage of that and has him wrapped around her little finger. He’s almost pathetic, and you do feel for him because sometimes love does that to you.”

Miller pointed out that Ruggiero’s transformation during the opera is different from that of Alcina. “Ruggiero becomes aware that Alcina has put him under a spell, and we see him having to fight against this woman who he was madly in love with — even when he discovers that his fiancé, Bradamante, is trying to rescue him. There is a moment when he hugs Bradamante but then steps back, realizing that it’s not the same as hugging Alcina. Whether or not he truly loved Alcina is up to the audience to decide. But I think that he did love her, which makes the aria ‘Verdi prati’ so heartbreaking — he is saying goodbye to a world he will never return to.”

Through some judicious cuts, the running time of the opera has been reduced to a manageable 2½ hours, but its many da capo arias make it vocally challenging for the singers. “They haven’t turned out to be as difficult as I predicted,” Olivia Boen said. “I’m really enjoying them. The opera is so well-written. Its characters are clear, and there’s so much opportunity for expression that I don’t find it exhausting to repeat the A section of the arias.”

Siena Miller said that the role of Ruggiero is vocally taxing, especially during the first act. “I joke that the opera should be called ‘Ruggiero’ because I’m onstage the entire first part.”

Miller recalled some good advice from British director Lee Blakeley about singing da capo arias. “I was covering a pants role last summer in St. Louis, and he said that to make Handel interesting, every little thing needs to be thought out. It’s not the type of drama with swooping feelings, so every second needs to be appealing for the audience. And if you are passionate about what you have to say, the da capo gives it a reason to be said again. I do enjoy singing Handel. It’s such a great teacher. You learn how to sing cleanly with ornamentation, which is an art in itself.”

Both Boen and Miller think the story of Alcina is one that contemporary audiences can relate to. “The opera draws you in because the characters are so vivacious,” Boen said. “Our sets and costumes are really interesting, and both casts are very strong.”

Said Miller, “The biggest fight that we have as opera lovers is to convince people that the genre is still relevant. The stories have lessons that we all can learn from, and I think Alcina is a great example of that. These characters feel the same emotions that control us today. I hope that people will come with that mindset and will be open to learning from the characters and their journeys. Besides, we’ve all known a person who has a garden full of ex-boyfriends or ex-girlfriends.”

END_OF_DOCUMENT_TOKEN_TO_BE_REPLACED

Supported by engagingly, yet simple staging by Cara Consilvio, a well-prepared cast of singers told the archetypal story of Cinderella with charm and flair. Framing the production was  a sparse but colorful set and wonderful lighting by Dave Brooks. END_OF_DOCUMENT_TOKEN_TO_BE_REPLACED