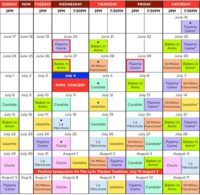 Opening on Saturday, June 16 at 7:30 pm, The Pajama Game is known for wonderful tunes and sassy choreography by Bob Fosse (one of his dancers was Shirley MacLaine), debuted in New York in 1954. The show features tunes such as “Hey There,” “Steam Heat,” “Once a Year Day,” and “Hernando’s Hideaway.”  Not to give away the plot, but it may be your only chance this year to enjoy a labor dispute between management and workers.

The stage director is Jacob Allen, the choreographer is Spencer Reese, and the conductor is J. Lynn Thompson.

Eighteen years earlier, in 1936, Richard Rodgers and Lorenz Hart collaborated on Babes in Arms (opening on Thursday, June 21 at 2:00 pm) which later became a film hit for Judy Garland and Mickey Rooney. While you may think of it as the  ‘hey kids, let’s put on a show!’ musical, with its’ rather adult themes this isn’t exactly a show for kids.

However, this version, created the University of Cincinnati Conservatory of Music nearly twenty years ago, is somewhat more PC. The plot is still the same. Kids — whose parents are busy in vaudeville — are sent off to a music (work) camp where they find an assortment of youngsters, including those of other races. As you might expect from Rodgers, the music is superb and Hart’s ageless lyrics combined for songs including “My Funny Valentine,” “The Lady is a Tramp,” “Johnny One-Note,” and “Where or When”. For whatever reason, Babes in Arms has never been revived on Broadway so this is a terrific opportunity to experience one of the best of the later Rodgers and Hart collaborations.

Everyone knows that Cole Porter loved Paris, and his Fifty Million Frenchmen (opening Thursday, June 28 at 2:00 pm) from 1929 includes the gorgeous love song to that city, “You Don’t Know Paree.” Even if you’ve never been there that song will put a lump in your throat. Based on the book by  Herbert Fields, Porter wrote the words and music, and it was the first big hit for the composer.

Although the plot is a bit on the frivolous side — an American playboy is determined to marry a girl he thinks is both rich and French — it turns out she’s neither. But her parents think she should marry a grand duke, if they could find one. You should be able to figure out that one ends: Paris in 1929, easy-peasy. But with such engaging music, who cares  — only Cole Porter could rhyme ‘armadillo’ and ‘pillow’ in a love song, and make it believable. Among the other classics are “You Do Something to Me” and “You’ve Got that Thing.”

The conductor is H. Lynn Thompson and the stage director is Steven A. Daigle.

It’s a double anniversary for OLO’s premiere of Candide (opening on Thursday, July 5 at 2:00 pm). Not only is it the 40th anniversary of the Company it’s also the 100th anniversary of the birth of American musical giant Leonard Bernstein. This version of his Candide is from London’s Royal National Theater by John Caird. Based on the classic 1759 satire by Voltaire, the original lyrics were supplied by some of America’s best writers, although not necessarily experienced at lyricists. Contributors include Stephen Sondheim, John Latouche, Lillian Hellman, Dorothy Parker, as well as Bernstein himself.

The overture is immediately recognizable as is the aria “Glitter and Be Gay” for a very confident coloratura soprano. Other notable songs are “The Best of All Possible Worlds” and “Make Our Garden Grow.” The stage director is Steven A. Daigle and the conductor is Steven Byess.

A relatively new tradition at OLO is the Festival Symposium. Held from July 31 through August 3, this year’s theme  is “Taking Light Opera Seriously.” The Symposium will feature roundtable discussions, musical presentations, lectures, and a look toward teh company’s next forty years. Tickets are available through the ticket office, but don’t delay, some events are already close to being sold out.

Freedlander Theatre is located at 1189 Beall Avenue on the campus of the College of Wooster. Tickets can be purchased by phone at 1-330-263-2345 or online.

If you’re interested in costumes, Ohio Light Opera: A Costume Retrospective is currently on view at the Wayne County Historical Society. Presented in partnership with Ohio Light Opera, the exhibit celebrates OLO’s four decades through costume and design. The display is open from 12:00 noon until 1:00 pm prior to every matinee and during the Society’s regular hours, Friday and Saturday from 1:00 pm until 4:00 pm. Admission is $5 per person. The Society is located at 546 E. Bowman, just east of Beall Avenue and is easy to reach from Freedlander Theatre.

END_OF_DOCUMENT_TOKEN_TO_BE_REPLACED

The strings-only work by Berg has made relatively frequent appearances on the Orchestra’s programs. In 2021, the musicians recorded it for the In Focus series, and it appeared again on last year’s European tour. Friday’s rendition maintained the group’s characteristic light and effortless playing, each section blending as much as possible to echo the work’s original form as a string quartet. At fifteen minutes total, the piece is quite short, but the dense encoded musical meanings require some extra-attentive listening. Splitting up the three movements ensured that each one could be appreciated on its own. END_OF_DOCUMENT_TOKEN_TO_BE_REPLACED