Rodgers & Hammerstein’s Cinderella was originally produced for television in 1957 — seven years after the animated Disney film was released — and starred Julie Andrews. According to the Rodgers & Hammerstein website, it was viewed by over 100 million people.

On June 18, the opening night of Ohio Light Opera (OLO) in Wooster, almost everyone in the theater in some way knew this story. A woman behind me sang along.

Cinderella begins in the village, a bright scene where our heroine feels free amongst people running their errands. It is with this sense of participation in a community where Cinderella, played with appropriate naïveté by Alexa Lowrey, feels most like everyone else. 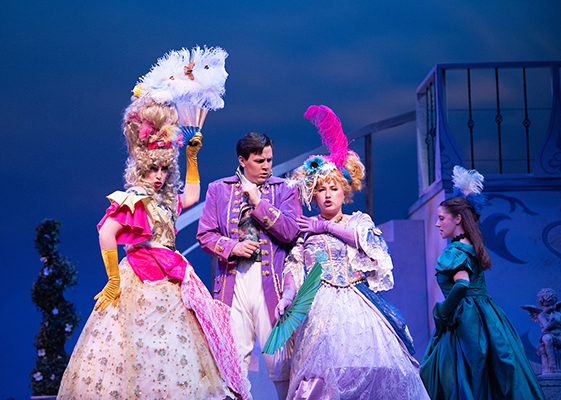 It is when she enters the dark home of her stepfamily — where ominous trees grow behind and above the walls of the house like prison bars — where she feels trapped in her own little corner, in the tedium and boredom of endless, meaningless work.

She speaks to the puppet mice in the bookcase, who pop in and out to listen to her complaints. They dance when she breaks out in song. “In My Own Little Corner” revels in the escape imagination offers, and ends with a sense of dissatisfaction. 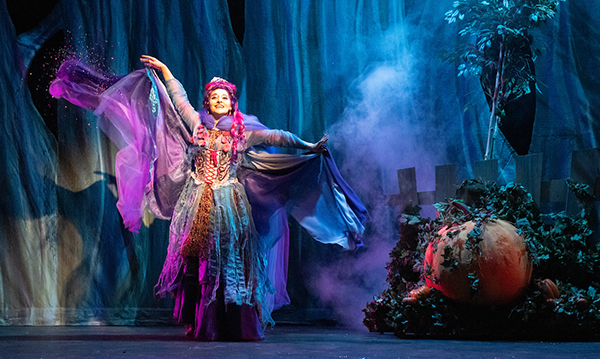 The insufferable stepmother, played by Michelle Pedersen in her third season at OLO, fails to teach her daughters — Cinderella’s outrageous stepsisters (Sarah Best and Abby Kurth) — about how to behave. They scratch themselves and hike up their dresses, they sit with a slouch while their knees lean away from each other, they laugh and snort and fail to compose themselves in respectable company. And they are hopeless in their advances towards men. They are spoiled rotten and expect the world to obey their demands as if they were royalty. The caricature, both funny and disturbing, is so ridiculous that it begins to resemble behavior one has seen outside of theater.

Jonathan Heller’s Prince Christopher walks the boards with stubbornness and incredulity, determined to rebel against the ball being thrown by his parents, the King and Queen, and marry for love.

The two principals’ romance is instantaneous, and the actors have good chemistry on stage. They rejoice and sing. They lose each other because Cinderella needs to disappear. Through the prince’s exhaustive pursuit they find each other again.

All of the singers put on a wonderful performance, and their acting is fun and loose. Spencer Reese’s direction and choreography is simple and effective. The costumes are bright and traditional. The orchestra, conducted by Michael Borowitz, plays very well.

Go out to Wooster and have some dinner at one of the many wonderful restaurants. Forget about your troubles and see a show — they’re playing all summer.

Supported by engagingly, yet simple staging by Cara Consilvio, a well-prepared cast of singers told the archetypal story of Cinderella with charm and flair. Framing the production was  a sparse but colorful set and wonderful lighting by Dave Brooks. END_OF_DOCUMENT_TOKEN_TO_BE_REPLACED

END_OF_DOCUMENT_TOKEN_TO_BE_REPLACED

The music isn’t easy to play, either. Over the course of two hours, all of the musicians brought fantastic focus to the unrelenting tricky rhythms and countless layers of parts, all of which require a high level of individual responsibility. Even in the moments of calm, the accompaniment remains perpetually unsettled. Adams — who made a sprightly presence on the podium — combines minimalist, repeating motives in gradual layers, which eventually become so dense they overwhelm the senses. Lisa Wong deserves special mention for her thorough preparation of the Cleveland Orchestra Chorus, as does Jennifer Rozsa for the Children’s Chorus, which made a brief but memorable appearance in the last few minutes. END_OF_DOCUMENT_TOKEN_TO_BE_REPLACED