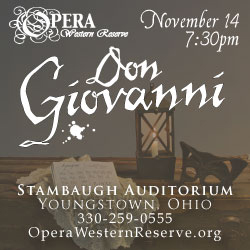 Last Friday evening Opera Western Reserve mounted its eleventh annual production, a solid version of Mozart’s Don Giovanni. As always, by limiting the event to one performance, the organization ensured a full house. Don Giovanni combines the comic, tragic, and supernatural in a magnificent musical pastiche. The opera is not as theatrically balanced as The Marriage of Figaro and The Magic Flute, and Act II often has significant cuts. The current production listed four scenes, when in fact each act has five. The opera’s final ensemble started as the curtain closed behind the protagonists, a device that seemed a bit artificial. Nonetheless, this is in keeping with Mozart’s conducting of the Prague premiere performances which he tweaked and changed every night. The moralizing tone at the end was necessary in its day because of the opera’s focus on the controversial figure and ultimate womanizer, Don Juan.

Baritone and Cortland, Ohio native Michael Young showed remarkable versatility in playing both the Commendatore (Donna Anna’s father) and Masetto (the peasant girl Zerlina’s fiancé). He deftly darkened his vocal quality for the Commendatore to help lend the role personality. As Masetto he brightened his voice and sang with fine timbre and great accuracy.

Soprano Danielle Messina, a graduate of the voice performance program at the Cincinnati College Conservatory of Music, appeared as the peasant girl Zerlina. Her Act I duet with Young (Masetto), the famous Give Me Your Hand, was gorgeous and an absolute delight. She consistently had a lovely timbre and negotiated difficult passages with flair.

Tenor Timothy Culver, a Kent State graduate and now a voice professor there, was exceptional as Don Ottavio. His lovely vocal quality adorned the production. Culver’s alluring Act I coloratura aria, She is my Dearest Treasure. I will not Rest until I bring her News of his Death, was technically outstanding and very expressive. He shined in his closing Act I duet with Donna Anna as he apologized for the need to postpone their wedding. His singing in the large vocal ensembles was also excellent.

Soprano Lara Lynn Cottrill, a University of Miami and Eastman grad, was wonderful as Donna Anna, daughter of the Commendatore and Ottavio’s fiancé. She tossed off her difficult role with eloquence and verve. Her finest singing seemed to take place in the duets with Culver (Ottavio). Cottrill’s quality was rather light, not so much in keeping with the role’s darker traditional treatment, and yet she showed powerful expression, pitch control, and dramatic timing.

Soprano Marian Vogel, another Cincinnati Conservatory grad and a veteran lead in several Opera Western Reserve productions, was equally good as Donna Elvira. Elvira, a former Don Giovanni conquest, has returned from a convent seeking revenge. Vogel’s Act I solo recitatives and arias were terrific, bringing the role to life with her convincing stage presence and talent.

Baritones Luis Alejandro Orozco and Luke Scott gave workmanlike performances respectively as Don Giovanni and Leporello, but both had some problems with clarity of diction — making their Italian unintelligible at times. Orozco’s acting was a bit awkward and wooden. Scott’s broad and exaggerated gestures brought Leperello to life. Still, the leads’ limitations lessened the opera’s general effect.

The cast was excellent in the large ensembles that ended each of the two acts. This was especially true of the septet near the close of Act I. Maestra Susan Davenny Wyner kept things moving effectively. The small orchestra sparkled, never overbalancing the singers. The choruses were well-prepared and nicely blocked. The company deserves praise for mounting so controversial and challenging an opera. Regrettably the rather symmetrical sets and staging did not rise to the imaginative qualities of earlier productions.

The cimbalom was the feature of the show, an instrument capable of taking on many personas. Its performer, Chester Englander, has shaped his career around the instrument, and has inspired composers to write more repertoire for it, some of which was presented on the program. END_OF_DOCUMENT_TOKEN_TO_BE_REPLACED

You wouldn’t expect that acoustic from a glance at the nave, which is wide and long, but not especially lofty. But when I guest conducted a local amateur choir and professional orchestra in Beethoven’s Mass in C there a few years back, during the first rehearsal we released the final chord of the “Gloria” and listened in astonishment for the next several seconds. The sound continued to roll down the space like the big wave that surfers dream about. END_OF_DOCUMENT_TOKEN_TO_BE_REPLACED