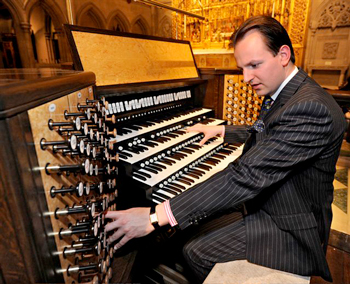 After his studies at The Juilliard School, the Canadian-born organist took a job as organist at the Church of the Resurrection in New York, where he’s now approaching his 15th anniversary as organist and choir master (and also serves as Dean of the New York Chapter of the American Guild of Organists).

He now runs what he calls a “neat, Anglo-Catholic music program” with a professional choir, an organ scholar, and after a long wait, a new organ. “The choir sings a wide swath of literature, from medieval music through the Renaissance and up to the 20th century,” Enlow said.

The Resurrection’s “new” organ is itself a resurrected instrument, moved from the crypt church of a basilica in Maine to New York in a restoration presided over by the Organ Clearing House. An early 20th-century Casavant instrument in the French Romantic style, it serves as the perfect vehicle for one of David Enlow’s favorite composers, César Franck, whose complete output for the organ he has recently recorded. (An all-Bach disc Enlow recorded on the Mander organ at St. Ignatius Loyola in New York is just about to be released.)

Franck’s Chorale No. 1 in E will figure importantly on Enlow’s program, along with other repertoire the organist figures will suit the E.M. Skinner instrument. “Frank Bridge’s Adagio and Percy Whitlock’s Fanfare will sit right at home there,” he said. “I’ve heard tremendous things about the organ, which for us circuit-riders is one of the best concert instruments around.”

David Enlow’s program includes a suite he has assembled of three pieces by Louis Vierne, reflecting his feeling that the famous composer and organist of Notre-Dame de Paris was not always at his best in the six symphonies he wrote for the instrument. “I’m not a dogmatic believer in Vierne’s extended works. He was more of a gifted miniaturist, like Chopin. I admire people who try putting a Vierne symphony together, but I don’t think the music is that strong.”

The organist’s program will begin and end with his own transcriptions of four-hand piano pieces by Antonín Dvořák and Claude Debussy, reflecting his belief that it’s important to bring reworkings of secular music into the organ repertoire. “Much of the organ literature over the last 400 years has been written for church, or is at least inadvertently pious,” Enlow said. “Franck’s organ works, for instance, don’t have the same sense of abandon and emotional depth as his chamber music. Transcriptions can open up the doors.”

Enlow finds four-hand piano music to be especially ripe for transcribing for the organ. “Four limbs is about the same as four hands — you can do about the same amount of damage,” he said, “and the music provides many opportunities for the colorful stops of the symphonic-style organ to shine through.”

The Debussy also fills a special void. “I see my transcription of the Petite Suite as righting a wrong. There’s no great Debussy organ work, and that’s always annoyed me. You would think that someone who liked to put the damper pedal down and add an aura to everything would just love the organ. With the appropriation of this very secular music with all its emotional palette and tone colors, I think we have a chance to do something great at the organ.”

Jackson began the program with a recitation of Langston Hughes’ poem “Helen Keller” — the first of five poems by Hughes that served as interludes between each piece on the first half. END_OF_DOCUMENT_TOKEN_TO_BE_REPLACED

Pianos with pins and tape on strings, a bass drum and tam tam, crotales, Almglocken, and vibes. Microphones were hooked up all around the instruments. The feed was sent to speakers around the room. Lighting designer Nicholas Houfek hung incandescent globes over the arrangement of instruments from thin black wires stretching across the beams. END_OF_DOCUMENT_TOKEN_TO_BE_REPLACED

From the podium, Elim Chan set an ambitious tone for the evening. The rising star conductor, here in her Cleveland Orchestra debut, has a commanding style, and every twist and turn in Saturday’s performance tracked closely with her baton. END_OF_DOCUMENT_TOKEN_TO_BE_REPLACED