Organist Jonathan Ryan, who pursued his undergraduate studies with Todd Wilson at the Cleveland Institute of Music before moving on to Eastman, will play the German Organ Mass, or Clavier-Übung III, on the Flentrop Organ in Trinity Cathedral on Tuesday, March 21 at 7:30 pm. The collection begins with the Prelude in E-flat and ends with a fugue in the same key. In between, Bach represents parts of the Lutheran Mass and Catechism with two sets of chorale settings — large ones with pedal, and smaller ones using only the manual keyboards. Ryan will play the larger settings, introduced by chant or hymn harmonizations sung by Trinity Chamber Singers under the direction of Todd Wilson.

We reached Jonathan Ryan at Christ Church in Greenwich, Connecticut, where he serves as associate director of music, to ask about his year-long project of performing “Clav III” on a number of organs in a variety of spaces. 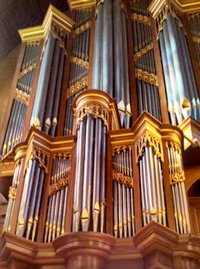 Daniel Hathaway: How did you decide to take on such a project?

Jonathan Ryan: There were several reasons. To mark the 500th anniversary of the Reformation, and because a significant portion of the piece is based on Martin Luther’s Catechism of 1529. Also because I think it’s some of the most incredible music written for the organ, and you don’t often hear it in one piece. Another reason is that if you only play the pedaliter chorales, it lasts about 75 minutes in a straight-through performance, and that works well for an audience that can handle a big dose of Bach. Lastly, because of what’s inside me. I had the inspiration to perform the whole piece one day while I was practicing, and it’s caused me to fall in love with the organ all over again. I’ve never had such a sense of what a privilege it is to be an organist.

DH: How did you go about preparing for such a marathon?

JR: In January of last year, well over six months before this tour began, I began playing the piece straight through to build focus and stamina for all that counterpoint, and to get used to switching stylistic gears between the different movements. Now I’m not really afraid of doing it at all. It’s become an evening of inspiration, of bathing in brilliance, of humanity elevating itself to great heights. 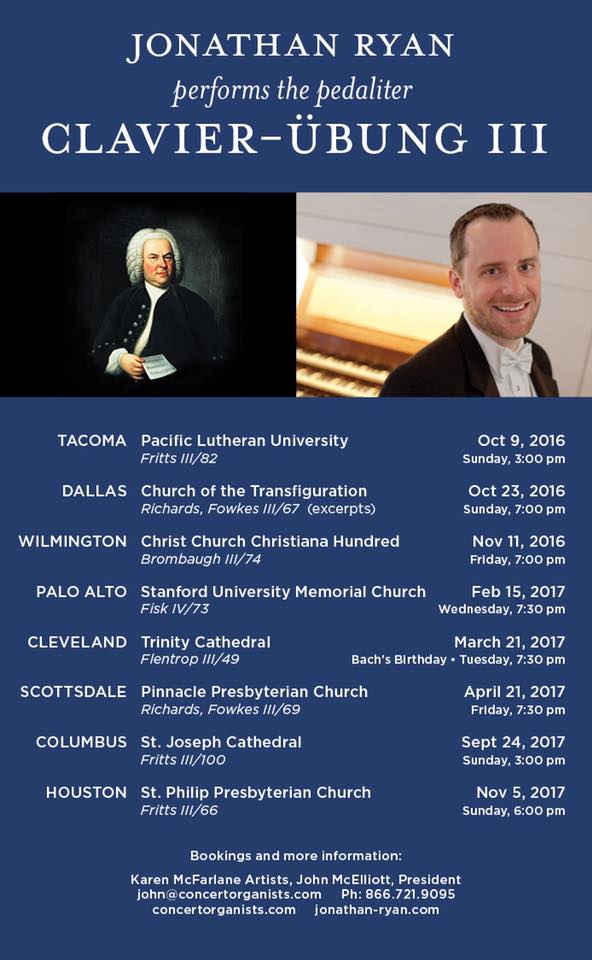 DH: And of course, you have to get used to switching between different organs.

JR: I feel so incredibly fortunate to have had such a number of venues with historically-based instruments show interest, including organs by Richards-Fowkes, Brombaugh, Fisk, Fritts, and Flentrop. It was intentional on my part to seek out more authentic instruments. But all of the organs have different stylistic influences. Nearly all of them include North and Central German styles, but the Brombaugh has some English influences. In a way, that’s appropriate because there are so many different styles in the music. Each instrument offers its own enlightenment to the music. But the difference in action from instrument to instrument sometimes makes you feel like you’re starting from scratch.

DH: How do you keep the piece in your fingers between recitals?

JR: What I do now is to spend some time on a few of the movements, working on tricky spots, and making sure they’re in good shape. I spent so much time preparing for the tour that the piece is pretty well in my DNA at this point. It’s going to be especially meaningful to play this work in Cleveland in such a prominent venue and on such a prominent instrument. I studied at CIM and used to go to Evensong at Trinity. I have many fond memories and a history there.

END_OF_DOCUMENT_TOKEN_TO_BE_REPLACED

Rodgers & Hammerstein’s Cinderella was originally produced for television in 1957 — seven years after the animated Disney film was released — and starred Julie Andrews. According to the Rodgers & Hammerstein website, it was viewed by over 100 million people. END_OF_DOCUMENT_TOKEN_TO_BE_REPLACED

The story line has its origin in an 1855 play and an 1842 farce that Thornton Wilder mined for his 1938 play The Merchant of Yonkers. When that turned out to be a flop, in 1954 Wilder made the crucial decision to re-center the show around the character of the legendary marriage broker Dolly Gallagher Levi and renamed it The Matchmaker. END_OF_DOCUMENT_TOKEN_TO_BE_REPLACED

The Dodero Center for the Performing Arts at the Gilmore Academy in Gates Mills is one feature of an impressive campus. The auditorium is shallow, the stage is deep, and the ensemble played without a shell. Throughout the program, the sound, especially in instruments’ lower registers, tended to disappear. END_OF_DOCUMENT_TOKEN_TO_BE_REPLACED