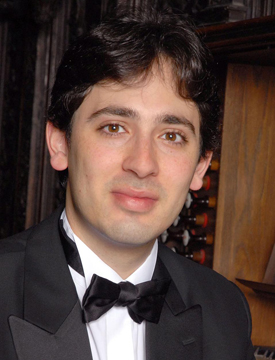 Vincent Dubois, Titular Organist of the Cathedral of Soissons, France, played a splendid recital at the Cathedral of St. John the Evangelist in downtown Cleveland on Wednesday, November 18. Indeed, he played almost enough music for two recitals, but such was the quality of his playing that the program did not seem overly long. The music chosen was standard repertoire by the big names of the organ world: Johann Sebastian Bach, Louis Vierne, Olivier Messiaen, Marcel Dupré, Charles-Marie Widor, César Franck, and Maurice Duruflé.

The cathedral’s 1948 Holtkamp organ is in the rear gallery, making it difficult for the audience to see the organist. For this concert a video feed from the organ gallery projected on a screen at the front of the nave provided a glimpse into Vincent Dubois’ technique. Playing most of the repertoire from memory, his image at the organ console was one of complete relaxation and physical freedom. His technique seemed boundless, and the various “big pieces” on the program showed it off to advantage.

Dubois opened with Bach’s Prelude and Fugue in a minor, BWV 543, using a legato, quasi-romantic style, sometimes creating counter-melodies against the main arpeggiated passages. The fugue showed flexibility of phrasing and Dubois adopted a sensible tempo for the cathedral’s reverberant acoustic.

French Baroque composer Nicolas de Grigny (1672-1703) was a contemporary of Bach’s, and Bach was known to have been familiar with de Grigny’s organ works. Vincent Dubois paired the Recit from de Grigny’s setting of the Gregorian hymn Pange Lingua with the last movement of Bach’s Trio Sonata No. 5 in C major, BWV 529. Each is technically challenging, but in contrasting ways.

De Grigny presents the chant melody in long notes on a buzzy reed stop, intertwined with an extremely florid and ornamented accompaniment. The texture is complex, as compared to Bach’s three independent lines, one for each hand and pedals. Bach’s trio sonata is the mark of a confident player, because there is nowhere to hide. Dubois was technically in control of both works. His Bach tempo was brisk, and he used a robust registration.

Dubois performed two movements from Vierne’s 24 Pièces de Fantasie, the Impromptu and Toccata. In the Impromptu he emphasized the French quality of the organ’s flute stops, and the beautiful Voix humaine, with its weirdly poetic growl. The Toccata was a good match for the Impromptu. Both are virtuosic, but in very different ways: the Impromptu is scherzo-like, and the Toccata brash.

Messiaen was represented by the quiet Alleluias sereins d’une âme qui désire le ciel (“Serene alleluias of a soul longing for heaven,” from the suite L’Ascension). Dubois “orchestrated” the work, using some variations in the registrations called for by the composer. It was a subtle performance that caught the exoticism of Messiaen’s music.

The first half of the program closed with Dupré’s showstopper Prelude and Fugue in g minor, Op. 7, no. 3. In his assured performance, Dubois was completely in control of the work’s fearsome technical demands.

After intermission, three more French composers were heard from, beginning with the opening Allegro maestoso from Widor’s Symphonie No. 6, a set of variations on the majestic opening theme. Dubois’s tempo was flexible, and at times he had a tendency to dally a bit too long, interrupting the flow of the music. Near the end he accelerated the tempo significantly for the final passage.

Franck’s Three Chorals for organ are landmarks of the late-nineteenth century French repertoire. Vincent Dubois’ playing of the second choral in B minor captured well the work’s elements of fantasy. He used a legato technique, eliding one note almost imperceptibly into the next before releasing the first. It was almost too legato; some phrases were not clearly ended before the next phrase began. He used the colors of the organ to fine effect, using registrations that were successful in mimicking those of a French romantic instrument. The climactic passage on full organ was fierce, with the registration suddenly reduced for a calm conclusion

The announced program ended with Duruflé’s brilliant, dissonant Toccata from his Suite, Op. 5. Dubois paid particular attention to the details of the melodic material presented in the pedals underpinning very flashy keyboard passages. He delineated the structure of the toccata with clarity, making sense of a piece that can often seem to ramble.

In some respects Vincent Dubois’ closing improvisation was the most fascinating thing on the program (even though the rest of the prepared repertoire was never less than outstanding). During the intermission, audience members were encouraged to notate suggested themes on a piece of manuscript paper inserted into the printed program. Dubois then chose three themes, which were appropriate to the terrorist attacks in Paris on the preceding Friday.

The improvisation was structured in two parts. The first, based on the Gregorian chant Dies irae, from the Roman Catholic Requiem, and the Lutheran chorale Nun komm der Heiden Heiland, an Advent hymn predicting the arrival of the Savior. The two themes were developed slowly, in a stately processional that might be heard as the organ Introit in a French cathedral. Beginning softly, the registration built to thrilling full organ.

The third theme, La Marseillaise, the French national anthem, was introduced on a reduced registration. It was not fully revealed at first, but slowly emerged over the course of several minutes, again to brilliant effect. This skill of improvisation is particularly French, and Vincent Dubois’ examples capped off a memorable evening.

END_OF_DOCUMENT_TOKEN_TO_BE_REPLACED

Rodgers & Hammerstein’s Cinderella was originally produced for television in 1957 — seven years after the animated Disney film was released — and starred Julie Andrews. According to the Rodgers & Hammerstein website, it was viewed by over 100 million people. END_OF_DOCUMENT_TOKEN_TO_BE_REPLACED

The story line has its origin in an 1855 play and an 1842 farce that Thornton Wilder mined for his 1938 play The Merchant of Yonkers. When that turned out to be a flop, in 1954 Wilder made the crucial decision to re-center the show around the character of the legendary marriage broker Dolly Gallagher Levi and renamed it The Matchmaker. END_OF_DOCUMENT_TOKEN_TO_BE_REPLACED

The Dodero Center for the Performing Arts at the Gilmore Academy in Gates Mills is one feature of an impressive campus. The auditorium is shallow, the stage is deep, and the ensemble played without a shell. Throughout the program, the sound, especially in instruments’ lower registers, tended to disappear. END_OF_DOCUMENT_TOKEN_TO_BE_REPLACED