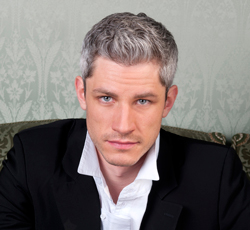 is the gap year for the biennial Baldwin Wallace Art Song Festival — and time for a solo recital to keep the buzz going for next year’s week-long event. This year’s invitee is the rising young French baritone Edwin Crossley-Mercer, who will join pianist Semjon Skigin for his U.S. solo recital debut on Sunday, March 3 at 4 pm in Gamble Auditorium at the BW Conservatory in Berea. We reached him via Skype in Dijon, France, where he had just begun his rehearsals for the title role in Mozart’s Don Giovanni with Opéra Dijon.

Daniel Hathaway: How are things going in Dijon?

Edwin Crossley-Mercer: I arrived on Thursday and I’ve just had my first day off today. I had a walk in the city and I am absolutely amazed by the exquisite beauty of the architecture. This city is just way beyond my expectations. I thought it would be a little provincial French city but the architecture is just beautiful. There’s the cathedral, the 18th century Palais des Ducs, old towers, a lot of medieval half-timbered houses and antique shops — and there was a flea market today with lots of beautiful antiques.

DH: Does the role of Don Giovanni suit your personality?

ECM: Well, well, well (laughing). I would say it’s very easy for me to have access to the dark side of that role. Sometimes I come out of rehearsals and say to myself, “Wow, I didn’t ever believe I could be that mean, that aggressive, that dark, that hypocritical!” I think I’m quite flexible. I could definitely move easily to Leporello who in the end has more charm. It’s easier for me to go funny and buffo. But yes, Giovanni is very deep and requires a lot of creativity. He’s so clumsy at being seductive. That’s something I want to explore probably more than just the stereotype of the good-looking, rich, powerful young man that he is. That’s not what he’s about. It’s definitely a very interesting part.

DH: You’ve started rehearsing, but then you’re coming to the States before the performances begin?

ECM: That’s it. I’ll be leaving on the first of March and arriving in Cleveland on the same day, then one day of rest and then the concert on the third. I’m very excited.

DH: Will this be your first performance in the U.S.?

ECM: It will be my first recital in the U.S. I did some church music a long time ago. When I was a student at the Versailles school we had an invitation from a society for baroque music that was based in Florida in Coral Gables, near Miami. They were nuts about the French Baroque and they had a professor in the Miami University who specialized in the music of Marc-Antoine Charpentier. He had five singers and musicians come over — but that was a long time ago. Ever since I’ve only been to the States for lessons or master classes or visiting. This will be my absolute, professional solo debut.

DH: What will you be singing on March 3?

ECM: The first half is going to be German. We’re going to start with An die ferne Geliebte by Beethoven. Then a group of six or seven Brahms songs — we have picked more on the bright side than the dark side. Then after a little break I have a few excerpts from Songs of Travel by Vaughan Williams — only the most beautiful ones. We won’t do the whole cycle because we also want to integrate some French songs. George Vassos asked that we do songs in French, German and English so I wanted to pick pieces with enough diversity. Then we have a set of Debussy and a set of Fauré — I think four of each — then some more contemporary French pieces, more on the chanson side, to finish off the afternoon.

DH: It sounds like that linguistic mix is right up your alley. You have a very interesting background family-wise and also language-wise.

ECM: Yes! My father is Irish. He studied French and Portuguese and moved to France to be a translator. He worked for the Michelin tire company and was the personal translator for Mr. Michelin, and did a lot of traveling. Then he worked for the finance branch of the Michelin company doing overseas communication. My mother is of Alsatian German descent, so my grandparents on my mother’s side would speak German. My mother’s mother’s parents were Italian, even though she grew up in Alsace. So I guess it’s been a mix of many things. I’m truly European! (laughing)

DH: What a great background for an opera singer.

ECM: That is always very helpful, of course.

DH: After starting out at the Conservatory in Clermont-Ferrand, you studied at the Center for Baroque Music in Versailles and then at the Hanns Eisler Academy in Berlin.

ECM: Yes, I studied in Berlin for five or six years. I had all the fabulous courses a young musician needs, from history to theory to piano and dancing and fencing and ballet and all these crazy things. And you even learn how to sing a little bit! In conservatory either you’re lucky with your teacher or you have to go looking outside. I’ve always had more luck with the masters I encountered outside the conservatory than in school, really.

DH: You seem to have developed a strong interest in Baroque opera as well as your activities in later styles.

ECM: Yes, absolutely! I used to sing a lot of Baroque sacred music, but less and less now — except for Bach and Handel — because my voice has grown a bit out of that league. That’s why I arrived a little late here for rehearsals for Giovanni. I just performed Hippolyte et Aricie by Rameau and I was very honored to sing the part of the King, Thésée, who has just the most wonderful music and the most lyric and dramatic scenes. Vocally it’s just the best stuff you can get in Rameau. Later I’m going to be singing Pollux in Castor et Pollux, and in yet another Rameau opera, Platée.

You know, these big roles in Baroque opera interest me a lot and I’m very glad to play them because you can sing them with your full voice and all your emotions. A lot of people have a tendency to think that old music shouldn’t be expressive, but I think that’s totally wrong, especially in opera.

DH: You’re also going to be singing the title role in The Marriage of Figaro in four staged productions with Gustavo Dudamel and the Los Angeles Philharmonic in May. You have some very interesting projects in your calendar.

ECM: This season is just fabulous. With Thésée, Giovanni, and Figaro it’s going to be really great.

DH: It looks like you’re also doing a concert performance of a Fauré opera.

ECM: Yes, Pénélope. We’re just doing one performance at the Theatre de Champs-Elysées with a really good conductor and a nice orchestra. That’s a very seldom-performed piece but from what I can tell it appears to be very, very beautiful.

DH: You’re juggling quite a few roles at the moment. How do you prepare?

ECM: I’m actually going to Italy to study with Umberto Finazzi at La Scala to prepare this Figaro for Los Angeles. I was lucky to have studied Don Giovanni in college but it does require a lot of preparation because generally, when you arrive for rehearsals, you have to have it all by heart — there’s no time to keep learning things while you rehearse.

DH: You seem to enjoy doing recitals as much as doing opera. What’s the difference between those two modes of singing and how do you switch between them?

ECM: I always thought that technically, vocally, I had to do things very differently between recital and opera. Recently I have found in rehearsals for the concert with Semjon at Baldwin Wallace that there is no difference. You sing recital and opera with the same concept of technique, so I wouldn’t say I have to switch from one to the other. The difference is the partnership with the pianist — that’s extremely important. When you’re with an orchestra, of course, you have to follow a conductor and — how should I say this? — be more obedient. In recital you have great freedom if you’re lucky enough to have a pianist who will follow every one of your intentions. That’s what I like so much about Semjon. You can sing a phrase three different ways in three different rehearsals and he’s going to catch it every time like a football player. Also, in recital you can completely create your own story with the repertoire you choose and go from one musical style to another. Still, the vocal production is not changed. That’s why switching is probably a bad concept. I’d previously thought, “Oh, I have to sing this much lighter, with a different approach”, but in the end, it’s not true.

DH: How did you get together with Semjon?

ECM: He was my teacher in college. He’s a professor of accompanying at the Hans Eisler Institute. I don’t know — he must have thought I was talented. He invited me to sing some recitals in Russia when I was still in conservatory and these turned out to be very successful with the Russian public. Ever since we’ve kind of ping-ponged back and forth between us finding concerts to do together. We did a Winterreise at the Musée d’Orsay in Paris that was one of our moments of great happiness.

DH: And how did the Baldwin Wallace Art Song Festival find you?

ECM: This is quite unbelievable! George Vassos heard me sing on a YouTube video and wrote me an invitation on the wall. I wrote back, and that was that— we had a concert! I don’t know if it was only that — there was probably another connection through the Eisler Academy — but still…

ECM: It’s can also be very dangerous, because when you’re a young singer you keep evolving, you keep learning, you keep having experiences with this and that. You’re never a finished product. You can sing things a specific way that are fabulous on YouTube but they have no reality. There are plenty of other things that I do that I have not posted on YouTube that I know I should have, but, you know, you’re not just that. For young singers with the way the media is so quick — it’s really weird.

For more information about Edwin Crossely-Mercer, visit the artist’s website.

Although the turbulent marriage of F. Scott and Zelda Fitzgerald —  self-caricatures of the Jazz Age — has inspired a number of literary efforts in addition to their own near-autobiographical novels, the subject never seems to have been approached through the lens of opera. Composer Evan Mack and librettist Joshua McGuire have stepped in to fill that void with their one-act The Ghosts of Gatsby, commissioned by Samford University (Montgomery, Alabama), where it premiered in November 2018. END_OF_DOCUMENT_TOKEN_TO_BE_REPLACED

While many American orchestras were just beginning to stir again after the holidays, Franz Welser-Möst and the Clevelanders were busy pulling off one of the most impressive programs in recent memory. A neglected Dvořák symphony, a darkish Mozart piano concerto featuring Yefim Bronfman, and a standout among Janáček’s few orchestral works served up sequential delights on Friday, January 10. END_OF_DOCUMENT_TOKEN_TO_BE_REPLACED