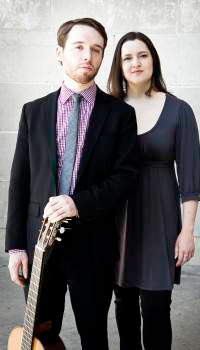 “I love working with Estelí and Colin because they are that wonderful combination of brilliant musicianship and enthusiastic personality,” says Pulitzer Prize-winning composer Caroline Shaw. They are both musicians that I admire and respect so much. And we all just get along!”

The story of how the three came to be friends and collaborators is fitting for a television movie and begins well before Caroline Shaw won the 2013 Pulitzer. And before Shaw and Gomez became Grammy winners as members of the vocal ensemble Roomful of Teeth.

“Caroline and I worked together with a composer who writes Rap cantatas. It’s kind of a modern meets baroque meets hip-hop mash-up,” recalls Davin. “We did the business card trade, and I went to her website and started listening to some of her music.”

Shaw and Gomez first met while doing their undergraduate studies at Yale, “at the time she was doing her violin degree,” Gomez said, “then we met again as members of Roomful of Teeth.” And it was after a Roomful of Teeth performance at Lincoln Center that Shaw introduced Gomez and Davin to each other.

“Caroline said I needed to meet Estelí,” Davin remembers. We hit it off on a personal level right away, we just clicked as people.” Shortly after they met, Gomez and Davin had coffee, “Both Estelí and I thought about music the same way, so a few days later I saw her and said I’ve got this project I want to do and I think I want to do it with you. That’s where it all began.”

When asked what each one admires about the other, Gomez answers, “we’resimilarly minded when it comes to business, which you don’t always find. I think he and I both attribute some of our success to the fact that we do have these business chops and can manage our own schedules.” Davin answers, “She’s super professional, super organized and always prepared. And there no nonsense.” Davin goes on to say, “we often contact each other at the same time about the same thing after not having talked for a couple of weeks. There’s some kind of telepathic thing going on.”

Estelí Gomez leads a diverse musical career. She is a member of the Grammy-nominated chorus, Seraphic Fire, and in addition to contemporary music performs a lot of early music as well. “My parents met in a folk/bluegrass group and so I had a lot of singing and guitar playing around my house as a kid. So really what I connect to most are pieces that come from the heart, which sounds sort of like a cliché but I do think that is why I have been able to perform different styles of music all over the world.”

In addition to his active performing career, Colin Davin has been active as a teacher at the National Conservatory in Kabul, Afghanistan, where he recently returned to take part in the school’s Winter Festival. “Things were great and the students were as eager as usual. I arrived in the afternoon and went straight from the airport to rehearsal. Five students had stayed late just to say hello, so it was really wonderful and set a nice tone for the entire trip.” Davin adds that on this trip he enjoyed the benefit of a teaching colleague. “It was also the first time I was there with another guitar teacher. It was nice to be able to talk about where the program is and is headed and to throw ideas around about how to move forward.” 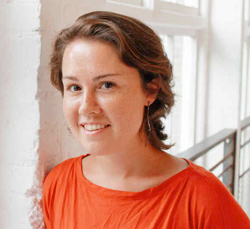 How did Gomez and Davin come to choose the program’s title, Ancient Melodies, Modern Echos? “It’s taken from a line in the second song of Britten’s Songs from the Chinese called “The Old Lute,” Davin explains. “It’s a very sad story about an instrument that has fallen into decay and the music that would have been played on it is now ignored. It’s not strictly a concert of old music but even the newer things represent music that is pulling the past into the present day. The Britten songs also pull in old Chinese poetry.”

As far as finalizing the repertoire for the concert, Gomez said they wanted to highlight the connections between the old and the new, “not only in Caroline’s work, which is inspired by both Britten and Dowland, but also to show how Britten was also influenced by Dowland.” Davin adds that when it came to programming Britten, there were only two choices, since he only wrote two song cycles for guitar and voice.

“Choosing Songs from the Chinese was a musical choice. We found the music more compelling and a little wierder — in a good way. And there is also a thematic text connection between the Britten and the songs we chose by Dowland. For example, Come Heavy Sleep is the song on which Britten based his solo guitar piece, Nocturnal.” Davin also notes that it was important to find a good balance with the texts. “Dowland can be a little depressing and we didn’t want to leave the audience feeling resentful about the unfairness of life.”

Gomez and Davin find it interesting that they had already chosen Dowland’s Come Again before they knew that Shaw was going to use it as the inspiration for her work. Caroline Shaw describes Come Again (Again) as a re-imagination of John Dowland’s lute song from around 1597. “The original vocal line remains very similar to the 1597 version, but the guitar part is completely new. It’s a bit like stretching and carving and painting over something old, with remnants of the original poking through here and there. The original Dowland song itself is very beautiful and a little bit scandalous.”

What is it about the music of Caroline Shaw that Gomez and Davin, along with many others, find attractive? “She writes joyous and organic music,” says Gomez, “she knows what she is doing and what she wants to say, but she’s not trying to prove something to an audience. I think that has been a huge part of her success.”

Davin says that he think’s Shaw’s music contains something that a lot of contemporary music lacks: a sense of profound simplicity. “There are no overly complex harmonic schemes. I’m not saying there is no complexity, but there is something very direct and simple about it. It says a lot without using too many words or notes.” Davin also says he loves the way Shaw is inspired by old music. “She has an amazing ear for hearing something fresh and different in music that’s been around a long time.”

END_OF_DOCUMENT_TOKEN_TO_BE_REPLACED

Today’s touring string quartets hew to so uniformly high a standard that it’s often little individual touches that make ensembles stand out. The Polish musicians who make up the Apollon Musagète Quartet showed up at Plymouth Church in Shaker Heights for their debut on the Cleveland Chamber Music Society series on February 4 in matching plaid suits and black shirts. And jettisoning their jackets, they played standing (except for the cellist). END_OF_DOCUMENT_TOKEN_TO_BE_REPLACED