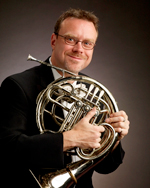 “I have played many of the big horn concertos and this piece has been on the back burner because [we needed] to find a tenor who was of the right ilk and available, says Cleveland Orchestra principal horn Richard King. The piece King is referring to is Benjamin Britten’s Serenade for Tenor, Horn and Strings and luckily for Cleveland audiences, the right tenor has come along.

This weekend at Severance Hall, tenor Matthew Polenzani and Richard King will give the first performances by The Cleveland Orchestra of Britten’s haunting work. The concerts, under the direction of Marek Janowski, also include Fauré’s Suite from Pelléas and Mélisande and Franck’s Symphony in D minor. Additionally, on Friday, October 11 beginning at 11:30 at the Beechmont Country Club, Richard King will be the featured guest on the orchestra’s Meet the Artist Series.

We spoke to Richard King by telephone and began by asking him to share his thoughts on Britten’s Serenade.

Richard King: Well I have never played it, so I am very excited. I don’t know if the Serenade is in the mainstream anymore but this is Britten’s 100th birthday year. The piece was written for the great — and maybe the greatest horn player of all time — Dennis Brain at his request. And interestingly, the first and last movements, which I’ll play off-stage, are written for open harmonics, which means there are no valves used. And Britten is specific in his instructions that the pitches are not to be corrected so it does sound like it is really out of tune. I want to make sure everyone knows that it is intentional [laughing.] So there will be a couple of clunkers that are suppose to be there. But I think that really adds something to set up the piece and to ride it off into the night. It is an incredible haunting quality. It’s very raw and primal sounding.

Britten composed it during World War II when it was a dreadful situation in England. So the music is very poignant in addition to being very haunting.

Mike Telin: You’ll also be taking part in a Meet the Artist session on Friday.

RK: Yes, and I really do enjoy doing those. It’s good to be able to make an actual connection with the audience. They put me and my colleagues in a real life context and it’s nice to get to know the audience.

I’m sure we’ll talk about the Britten and my section colleague Jessie McCormick and I will play four duets by Gunther Schuller. That may sound scary but they really are not scary at all. But like I said, every opportunity we can take to make actual connections with people is really important.

MT: In addition to the orchestra, you also play a lot of chamber music. Do you approach one differently from the other?

RK: The way I think of playing and the way I was taught and the way I appreciate hearing music is to play as beautifully as possible. I don’t try to push my will over the orchestra by playing as loud as I can. And I think in that way playing chamber music is similar to playing in the orchestra — and obviously the conductor is the deciding factor in the difference between those two situations. But we do try to play in a chamber way which means primarily to listen to one another.

I always tell my students that all the dynamics we see on the page have to be taken in the context of what is going on in the music. And by that I mean you need to ask yourself, is my part important? My next question is always, does anybody else think your part is important? [laughing] But we do tend to think that what we are doing is important all the time. So it is hard to get context unless you think about the other players who are involved.

Since 1986 I’ve been a member of the Center City Brass Quintet and I think that is the most fun I have in chamber music because we’re all pals and we get along so well. It is a real outlet. not only creatively but socially as well. And there is nothing more fun then playing chamber music with people you like and get along with.

MT: Can you talk a little but about the type of horn you and the section use, the Conn 8D?

RK: That’s right — we all play on Conn 8D’s and I think that’s is a tradition that goes back to the 1950’s. The Conn is an interesting thing because it use to be pretty much the industry standard in this country but I think now that we are the only horn section that plays them exclusively. Some people think it is a sound of yesterday which I think is sad, but it is a sound that we believe in and think it is the most appropriate to our application.

MT: The company is in Eastlake and I remember reading that they were building new instruments for the section.

RK: Yes. They were talking about trying to make a professional grade instrument and they asked me to be involved. It’s kind of funny because when I pick up a horn and play it I know if I like it or not, but I don’t know the first thing about changing this or that to make it better. It just never occurred to me to be interested in that because it’s not my thing.

I played about twenty of the new instruments that were hand-made at the factory and they wanted to get a deal going, I guess with me, but I thought it would be much better for everyone if they included the whole horn section. For me, if there’s one guy on a poster or in a magazine holding a horn I think OK, maybe they did give him the horn and maybe some cash to stand there and hold it.

I also made it very clear that if the horn they made for me was better then the one I had I’d be happy to play it, otherwise no. But they came up with an instrument that caused me to put down the horn I had for twenty years. And I’ve been playing it ever since.

MT: On a different topic you are also married to a musician and you have children, which is not unusual but can make daily life interesting.

RK: First, Julie is super organized and makes sure the schedule is running smoothly. It’s funny because our kids, who are ten and seven, think that on weekends people put on black clothes, take their instruments and go out for the evening, that’s just how they think. I remember some funny questions to people from my son when he was small – where do you practice in this house? Or how come you’re home on Saturday night? What instrument is in that case? — and it was only a briefcase.

The kids are both taking music lessons and having a great time. We won’t push them but will certainly encourage them to follow whatever they think is alright. It’s a fun life and yes, it’s always interesting and very diverse. Nothing is ever the same. When we do have a dinner party everyone always tells us that we have the most interesting friends — it’s such a diverse group of people. Which is really great and I’m glad the kids are learning about everything and everybody. It’s wonderful.

END_OF_DOCUMENT_TOKEN_TO_BE_REPLACED

Supported by engagingly, yet simple staging by Cara Consilvio, a well-prepared cast of singers told the archetypal story of Cinderella with charm and flair. Framing the production was  a sparse but colorful set and wonderful lighting by Dave Brooks. END_OF_DOCUMENT_TOKEN_TO_BE_REPLACED