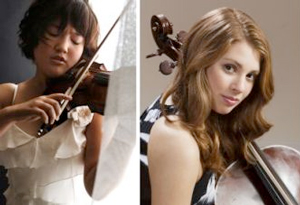 Johannes Brahms wrote his Double Concerto for violinist Joseph Joachim and cellist Robert Haussmann in 1887 with the intention of repairing a damaged friendship with the violinist (the two had fallen out when Brahms had taken Joachim’s wife’s side in a divorce). Joachim and Haussmann had been frequent collaborators during their long careers. By contrast, on Sunday, April 28 at 3:30 pm, the “Double” will bring together two young musicians who already have established distinguished track records but have never worked together before, as violinist Jinjoo Cho and cellist Cicely Parnas join Robert L. Cronquist and the Cleveland Women’s Orchestra for the ensemble’s 78th anniversary concert at Severance Hall. We spoke to both soloists by phone to catch up on their recent activities.

Jinjoo Cho is finishing up her master’s degree at the Cleveland Institute of Music where she studies with Jaime Laredo and plans to stay on next year for a Professional Studies Degree. Her recent big news was winning first place in the Buenos Aires Competition, which earned her a concert tour in Argentina. This summer, she will join her regular pianist HyunSoo Kim for a three-week chamber music residency at the Banff Center in Canada.

But before that, she’s really busy locally this month with her second master’s recital, appearing as concertmaster for the Kalichstein-Laredo-Robinson Trio’s performance of the Beethoven Triple Concerto and third symphony with the CIM Orchestra (including some conducting responsibilities when Jaime Laredo was busy being a violin soloist), and the Women’s Orchestra concert.

“I’ve had a relationship with the Women’s Orchestra for a long time,” Cho noted. “I played the Mendelssohn concerto with them when I was thirteen, and I play with the CWO or the Lakeside Symphony [which Cronquist also conducts] nearly every season. Mr. Cronquist wanted to program the Brahms and suggested Cicely,” who Cho had not yet met at the time of our conversation. “I read the piece in high school,” Cho said, “but I’ve never played it in public. I’m looking forward to getting together with Cicely and working on the concerto together.”

Cicely Parnas recently won the Young Concert Artists Auditions, which guarantees her her own set of future concerts. “I’m going to be playing a benefit for them on May first, then later in May I’m going to Asia for two and a half weeks for a series of chamber music concerts with other Young Concert Artists in Tokyo and two or three solo recitals in China.” Earlier this year, she appeared with the New York String Orchestra at Carnegie Hall and with the Vermont Symphony under the baton of Jaime Laredo.

Parnas has also been a student at CIM, working with Sharon Robinson with whom she’s studied since she was seventeen as well as participating in Robinson’s new Intensive Piano Trio Program. Though she’s no longer enrolled at the Institute, she continues to live in Cleveland and study with Robinson. “Sharon and I have a close relationship which is so wonderful for me, and she’s also a fantastic chamber music coach.”

Parnas has deep family connections with music — her grandfather is the cellist Leslie Parnas and her sister Madalyn is a violinist who is currently studying as a Marshall Scholar at the Royal Academy of Music in London. The sisters most recently played together in March during a two-week tour with France’s Orchestra of the Loire Valley, and performed the Brahms Double together a few years ago. Parnas loves the piece and is eager to play it with Cho: “It’s Brahms! There are so many characters in this monstrous, long, difficult piece and the depth of the music is incredible.”