“What I think is great about NEOSonicFest is that the groups that are performing are a good balance and represent what is going on in the music scene here in Cleveland,” Ensemble HD and Cleveland Orchestra principal flutist Joshua Smith said recently by telephone. “I think people will find there is a broad spectrum of musical examples of what the term New Music means.” On Sunday, March 30 beginning at 7:30 pm in Harkness Chapel at Case Western Reserve University, Ensemble HD with special guests Verb Ballets, will feature music that represents a variety of musical styles and combinations of instruments.

In planning Sunday’s program, Smith said they wanted to give each member a chance to step into the spotlight but they also wanted to choose at least one piece that would include all of the ensemble’s members, a task he admits was not easy.

“It’s a slightly unusual combination of instruments, but we did want to find something that in a weird way would involve all of us.” They found just the piece in David Lang’s Little Eye (for cello and four non-percussionists).

“Little Eye is intended to suggest the idea of little kids sitting in the back seat on a long car trip just watching the world go by and maybe getting a little bored,” Smith explained. “It sounds repetitive and gives you the illusion of being lulled by watching telephone poles going by. Because of the naive quality of the piece and because Lang does ask for non-percussionists, we decided to use Fischer-Price xylophones. The piece involves one soloist and the rest of us are playing toys along with him. We’re not using our own instruments but at least we’re all collaborating and I think it will be fun.” 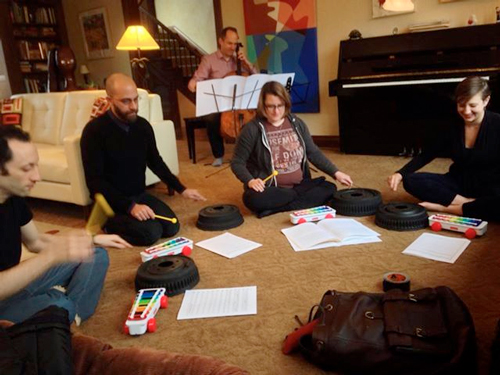 Composed in 1971, George Crumb’s Vox Balaenae (Voice of the Whale) is inspired, as the title suggests, by recordings of humpback whales. Scored for amplified flute, cello and piano, the work has become a classic of 20th Century music. “It’s a fun piece that is supposed to evoke the universe: nature and the universe in very broad senses. It also is supposed to evoke a timelessness and an Ah! in the larger picture,” said Smith. “Crumb specified that the piece should be performed with just a little bit of lighting and even suggested that the performers be masked in an effort to take their specific humanity away so the listener will be transported away solely into sound.”

Although Smith has performed the Crumb many times, Sunday’s concert will be his first performance of the work that includes choreography. “I wouldn’t normally think of combining the piece with anything, but when Rich Rinehart suggested involving Verb Ballets in some way, lo and behold! — the Crumb was the first thing I thought of.” Smith looks forward to working with choreographer Sarah Whale. “Part of the fun is working with and getting to know new people, and while I’m not sure that Crumb ever thought that the piece should be choreographed, I’m also sure that he would be delighted.”

The program also includes Esa-Pekka Salonen’s Lachen verlernt (for solo violin) 2002, Luciano Berio’s Sequenza (for solo oboe) 1969, Kaija Saariaho’s Mirrors (for flute and cello) 1997, and Toru Takemitsu’s A Bird Came Down the Walk (for viola and piano) 1994. “All of the pieces are challenging in certain ways but they’re also all very attractive. Part of what is fun about presenting different examples of new music is that people begin to understand that there is no need to be afraid of it.”

Photo of Lang rehearsal by Amy Lee via Facebook.