“It seemed like this was the next challenge,” said Apollo’s Fire artistic director Jeannette Sorrell. “Our Celtic program in particular made me ready to tackle something new.”

That something new will reveal itself this week as Apollo’s Fire presents five performances of “Sephardic Journey: Wanderings of the Spanish Jews” beginning on Thursday, February 20 at Fairlawn Lutheran Church, with subsequent concerts at St. Paul’s Episcopal Church in Cleveland Heights (February 21), The Temple-Tifereth Israel in Beachwood (February 22 & 25) and Rocky River Presbyterian Church (February 23).

“I’ve always loved this music,” Sorrell told us by telephone from Houston, where she was conducting two complete cycles of Brandenburg Concertos — the kind of repertoire in which she’s made her reputation. “I’ve been working closely with Nell Snaidas and Jeffrey Strauss, who have sung Sephardic music all their lives — Jeff grew up in the cantorial tradition and Nell’s father was part of a Sephardic community in South America. It’s rewarding and brings us back to our roots.”

The program will offer a mix of traditional folk music, ritual music from the synagogue and composed music, “an emotional journey interweaving daily life with sacred elements: the music of the Temple and the songs of the Sabbath,” Sorrell said. It will also feature music by the most illustrious Jewish composer of the Baroque period, Salamone Rossi (c1570-1630).

“Rossi worked as a court musician for the Duke of Mantua,” Sorrell said. “He was a violinist and may have served as Monteverdi’s concertmaster. Being Jewish, he walked home every night to the ghetto and wrote music to Hebrew texts like the choral collection The Songs of Solomon. The style was Italian baroque but the text was in Hebrew.” 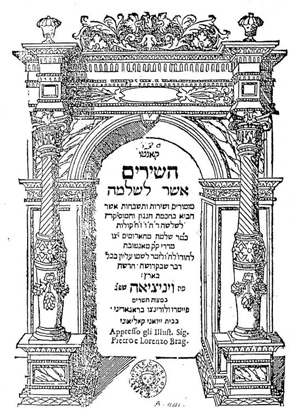 The sections of the program devoted to everyday life (“Love & Romance” and “Feasting and Celebration”) will feature songs from Nell Snaidas’s repertory. “It’s beautiful and really fun music. The medieval men’s chants I really love. They sound like organum and it’s striking when you hear it with the Hebrew text, which gives it an earthy, evocative quality,” Sorrell said. “Some ballads like Ah, the Bridegroom wants no money have a lively rhythm and mixed meters. We’re really going to have to count!”

Taking the stage with Sorrell, Snaidas and Strauss will be tenor Karim Sulayman, hammer dulcimer player Tina Bergmann, percussionist Rex Benincasa (“who will be coming from New York with a truckload of exotic instruments that will add wonderful color and texture”), string players Olivier Brault, Julie Andrijeski, Karina Fox and René Schiffer, and guest artist Christina Patton, who will play harp, flute and shawm — the latter an “outdoor” instrument that’s making its first appearance in an Apollo’s Fire concert. Adding to the musical textures will be the twelve members of Apollo’s Singers, who have been receiving coaching in Hebrew from Jeffrey Strauss.

Sorrell has made many of the arrangements herself, and says that collecting and transcribing them has been a labor of love shared with Snaidas, Strauss and Schiffer. Schiffer spent a considerable amount of time transcribing some songs from recordings and typesetting them. But don’t think that the performers will be glued to the printed music. “I learned from our other folk programs that it’s helpful to give the musicians some structure on paper — a bass line, an introduction, interludes and descants — but not too much,” she said.

END_OF_DOCUMENT_TOKEN_TO_BE_REPLACED

What was that strange din coming over the live feed from Ludwig Recital Hall on Friday evening, July 23, as the Miami String Quartet filed onstage to play the third faculty recital of the Kent Blossom Music Festival? Accustomed as we were during the pandemic ban on live audiences to hearing the sound of no hands clapping, it was both startling and thrilling to witness a large crowd putting their hands together to welcome one of the Festival’s perennial favorites back for an in-person performance. END_OF_DOCUMENT_TOKEN_TO_BE_REPLACED

Practical reasons aside, there aren’t many ensembles who can put together an all-Mozart evening as elegantly as The Cleveland Orchestra. END_OF_DOCUMENT_TOKEN_TO_BE_REPLACED