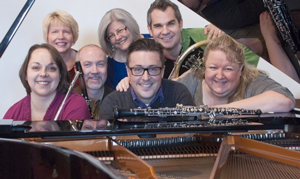 In addition to some old favorites like Dvorak’s “Going Home” from his New World Symphony and a sampler of Stephen Foster’s songs, audience members will also have the opportunity to become part of the performance through poetry, an idea that coalesced out of National Public Radio’s StoryCorps. “We’ll invite the audience to write something about what homecoming — or at this time of year, coming home for Thanksgiving — means to them. During intermission we’ll turn whatever we get into a narration that will be read during Jean-Michel Damase’s Seventeen Variations.”

Dee points out that people who aren’t feeling particularly poetic can simply jot down the name of someone whom they will miss or look forward to seeing on Thanksgiving. “We want the audience to be part of the art-making at any level they feel comfortable.”

What was it about the Random Acts experiences that left such a profound impact on the musicians? Dee, who coordinated more than 150 Random Acts of Culture events for the Akron Symphony, recalls a performance on a slushy Saturday morning in November at the Akron Bus Terminal. “The musicians were very tired, but they got inside and started to play Musetta’s Waltz. There we were in the bus station with a gathering of people who were just there, and it was the most profound experience because it touched every person. There were tears, joy, and appreciation, and it completely changed those peoples’ day. It also changed us. We drove away all saying, ‘That’s why we do this. And we should do more of that all the time.”

After the conclusion of Random Acts, Dee and her Akron Symphony colleagues Pamela Murchison, flute and piccolo, Cynthia Warren, oboe and English horn, Thomas Reed, clarinet and saxophone, and Cynthia Wulff, horn, began discussing ways of expanding on their experiences “We talked about what we wanted to do, how we wanted to do it and what direction we would go for nearly a year. The discussions led to a conversation with Howard Parr, Akron Civic Executive Director, who has presented jazz along with various styles of music on the Cabaret Series with great success and was interested to see if classical could also work.

Although creating a cabaret show is quite different and takes a little different kind of planning than they were accustomed to doing, Dee credits the creativity of her colleagues for re-imagining the traditional chamber music experience. They also asked pianist and vocalist Robert Frankenberry to join them, who in addition to performing has contributed arrangements.

“Every person brings something to the group in addition to playing their instrument and has contributed to the creation of the show.” Dee points out that the program also includes Bobby McFerrin’s version of Paul McCartney’s Blackbird in an arrangement by Matthew Murchison for piccolo and tenor, as well as Frankenberry’s arrangement of “What a Wonderful World” for wind quintet and tenor. Now that the show has been workshopped and refined, Dee says they look forward to Friday’s performance, “We’re very excited about it and we want people to know that we want them to treat it like a concert at a club, enjoy a drink and move around if you like.”