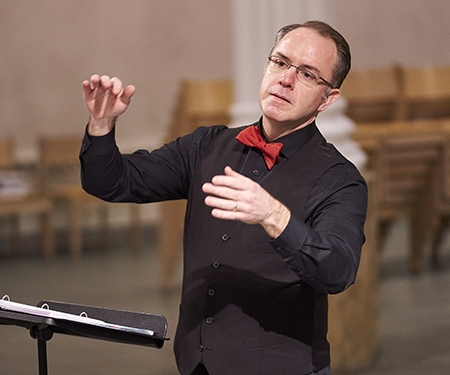 Quire Cleveland will resume live concerts this weekend, with three performances of the 11th edition of its annual Carols for Quire scheduled for December 2, 3, and 4 in great ecclesiastical spaces around the city.

I reached conductor Jay White by phone in his studio at Kent State University and began by asking him what was involved in restarting a choral machine that’s been silent for two seasons.

“It’s been interesting,” he said. “As you can imagine, many of the singers, unless they had any kind of a church job over the course of the pandemic — when they were recording something and sending it in — there’s been very little if any ensemble work at all, or it’s been one singer on a part. Most of the members of the ensemble, myself included, haven’t had much opportunity to sing in the past 20-some-odd months.

“That said, what has been working well is that the enthusiasm and excitement for wanting to do this work is infectious to the point where people are really stepping up,” he said.

Because singing is such a complex activity, White said that getting a chorus back in shape is similar to retraining a sports team. “It requires building up both vocal and mental stamina, and you also have to prepare physically for standing two hours a day.”

And then there’s the matter of relearning the niceties of musical styles. Quire’s programs this December, titled “Mary’s Song,” are structured around four different settings of the Magnificat, Mary’s response to the angel Gabriel’s announcement that she would give birth to Jesus. “The composers range from Victoria in Spain to Palestrina in Italy, so the singers have to bring a great deal of knowledge to each of them.”

White noted that Robert Parsons’ homophonic, double-choir setting is in English, while Robert Fayrfax’s Latin setting is in the late Medieval style and alternates sections for five, two, and three parts. “When you really dig into how Palestrina has set the text in his eight-part Magnificat Primi Toni, it’s ingenious. And Victoria’s setting shows his special, Spanish way of using triple meter to create lively dance rhythms.” 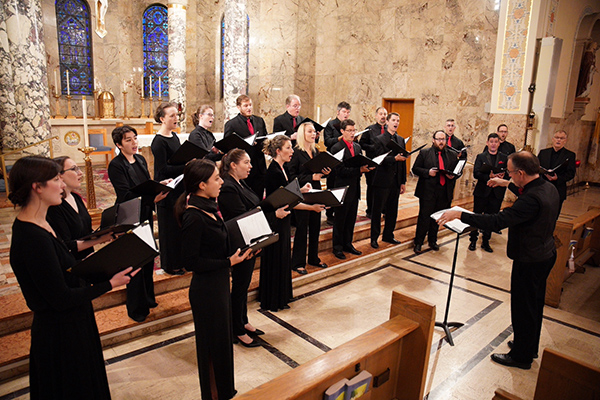 Because the Magnificat gives the program its special context, White has filled out the concerts with carols that resonate with that theme. “They’re mostly taken from the Oxford University Press carol publications,” White said. “We’ll include the Cherry Tree Carol to get Joseph into the story, and we’ve worked out a way to simulate organ harmonies when Quire and the audience join in Once in Royal David’s City.” White believes in achieving a mix of the familiar and the new. “Familiar so people can participate with some comfort, new so we can make a joyful noise — with precautions.”

Those precautions will include monitoring the health of Quire’s singers closely as they move between venues. “Daily rapid tests will make it possible to continue rehearsing en masse,” White said, adding that face masks tend to interfere with the color of voices.

It will be Jay White’s responsibility to adjust tempos to the special acoustic conditions Quire will find in each venue. “St. Paschal Baylon is a first for us. Choral sound blooms in that space, so I can choose slightly faster tempos. Our Lady of Peace has much more reverberation, so we can slow things down.”

To my closing question of how he personally maintained his sanity during COVID, White said, “I learned the importance of patience. I turned the corner when I finally admitted that this was something I couldn’t control.”

Bianca Ciubancan (16, Chicago, Ill) began the afternoon session with Jessie Montgomery’s Rhapsody No. 1 for solo violin. Playing with a warm, rich sound, Ciubancan brought a thoughtful, intimate approach to the work, highlighting each of its distinct episodes. END_OF_DOCUMENT_TOKEN_TO_BE_REPLACED

END_OF_DOCUMENT_TOKEN_TO_BE_REPLACED

Franz Schmidt’s Symphony No. 4 showcased the ensemble, under guest conductor Jonathan Berman, in the standard conventions of a not-so-standard piece. But at the start of the program, the musicians were equal partners to pianist Cédric Tiberghien, whose playing could be as bold as the full orchestra or as intimate as any instrumental solo. END_OF_DOCUMENT_TOKEN_TO_BE_REPLACED