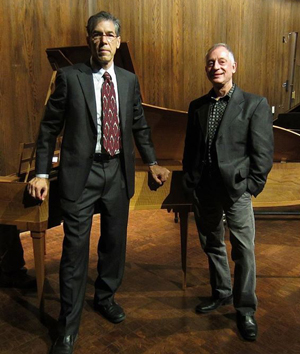 The first of the “Festival Events,” new to the 2013 Cleveland International Piano Competition — Competition Conversations: A HIP (Historically Informed Performance) Approach to Piano Music — took place on Thursday morning, August 1 in the Recital Hall at The Cleveland Museum of Art. Webb Wiggins, Associate Professor of Harpsichord at the Oberlin College Conservatory of Music prepared the notes discussing Baroque Elements in Performance as compared to Romantic style interpretations — with the added byline “all notes are not created equal.”

David Breitman, Director of Historical Performance at the Oberlin College Conservatory of Music joined Mr. Wiggins in this enlightening conversation as they compared approaches to music and performance practices on instruments of the Baroque and Romantic periods using instruments from the Museum’s collection. What may have at first seemed to be a rather intellectual subject aimed at serious performers, turned out to be just the opposite as both speakers clearly and congenially presented their views.

Musical compositions were written in the Baroque period as prolifically as movies are being cranked out in our day, with anything over twenty years-old considered passé. And the musical instruments were constantly developing, thus inspiring composers to embrace and display their capabilities as well as compensate for their deficiencies. On a modern-day Steinway — which has changed little since the 1880s — the duration of sound long after a key is struck enables a different style of playing and expression, full of sonorous and colorful effects. And this, of course, inspires composers to explore the many new and different possibilities when writing for this instrument.

Wiggins summarized that in the music of the Baroque period, smaller gestures, more punctuation and a strong sense of the bar line with strong and weak beats are among the many key components of successful interpretation. He told of the need for a certain flex in concept and approach, devoid of a metronomic presentation when playing a series of notes, and placing importance on particular tones within a melody or stressing harmonic changes. 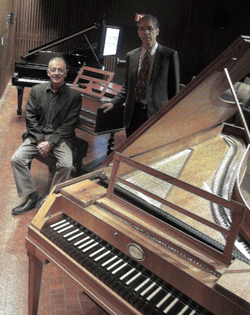 After comparing different editions of Bach’s Allemande from the French Suite No. 5, Wiggins performed it on the harpsichord. All of the points he previously discussed were suddenly realized and fully understood as he made his case, convincing us not only of the importance of historically informed performances but of its variety and beauty as well.

Breitman compared the fortepiano to the modern piano, offering musical illustration by way of two brief excerpts from Beethoven’s piano sonatas. The imposing opening c-minor chord of the “Pathetique” Sonata, played forte then fading to piano before commencing with the dotted-rhythm notes, would have done just that in Beethoven’s day. Not so on our sonorous instruments of today.

Another interesting excerpt was from the wonderful, ghostly “voice in a cave” sotto voce cadenza in the first movement of the “Tempest” Sonata. Beethoven indicates that the pedal should remain depressed for the duration of this ethereal passage. Of course in his day, the dominant A major arpeggiated chord played at the beginning of the section would have faded long before its d-minor resolution. He also included brief sections from two Mozart piano sonatas, again comparing performance practices on both the fortepiano and the modern Steinway.

Breitman queried, “as we prize and seek out authentic culinary preparations of the many different cuisines of the world’s cultures, why not do so in music as well?” An interesting and ear-opening observation, one which seems to validate both of their arguments, inspiring us all to go back to our scores to reexamine, interpret anew and play with enlightened minds and hearts.