I’ve just returned from a trip to Germany, where I encountered three fine conductors, two superb orchestras (in two extraordinary halls), and one stellar opera. My visit was arranged by Road Scholar, a company that offers educational travel, mostly for retirees. I was travelling with twelve other classical music fans, and much of what I am writing here was developed in discussions over dinner or beer.

I will start in Leipzig with a conductor — the excellent Jaap van Zweden, who recently became music director of the New York Philharmonic. At first glance a little unprepossessing and not particularly graceful, van Zweden is in fact extraordinarily deft with his stick, his hands, and his entire body — precise, flexible, utterly rhythm-infused. He seemed to evoke commitment from every player in the Leipzig Gewandhaus Orchestra — no simple task for a visiting conductor.

Although I was initially disappointed that van Zweden had programmed old chestnuts (Mozart’s C-minor piano concerto and Beethoven’s Fifth Symphony), in this performance neither piece was in any sense old. The Beethoven was startlingly fast-paced, faster than I can remember. The second movement (Andante con moto) was in this case truly “con moto,” and the other movements virtually flew. The rapid pacing was not just for show. It enabled a lightning-filled reading of the first three movements, which in turn justified a jubilant finale with the wonderful Gewandhaus brass in full force. 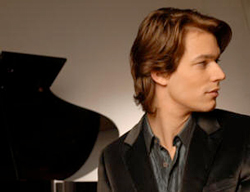 The soloist in the Mozart concerto was the young French pianist David Fray, whose forceful Romanticism perfectly complemented van Zweden’s expansive sweep. Neither Fray, with his luxuriant use of the damper pedal, nor van Zweden and the Gewandhaus, with their emphatic swells and sweeping lines, could be said to give a historically informed interpretation, but on the whole I was happy to let go of ‘H.I.P.’ for an evening.

Fray’s encore was a quiet and deeply introspective performance of the G-minor fugue from Book One of the Well-Tempered Clavier — appropriate homage to the master of Leipzig.

The Gewandhaus is memorable for its warm, embracing, and clear acoustic. On our tour, it was topped only by the Philharmonie hall in Berlin. This masterpiece was built by the city of East Berlin at the height of the Cold War, opening in 1963 with the division of Berlin in full force.

I was astounded by the Philharmonie’s vibrant acoustic; it is a great venue for an amazing orchestra, the Berlin Philharmonic. The gutsy, deep-in-the-core string sound that opened Lutoslawski’s Concerto for Orchestra was just the first in a tumbling cascade of virtuosic playing that electrified the audience, even to the back section where I was sitting. Led by guest conductor Paavo Järvi, the Berliners did themselves proud in Lutoslawski’s demanding and exposed sonorities. 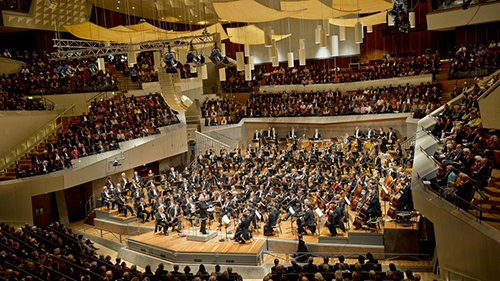 Less gripping, in my opinion — although my opinion was not shared by all on our tour — was the second-half work, Brahms’ Second Symphony. Järvi’s gemütlich tempi and subdued affect struck me as a bit pallid after the strenuous grandeur of the Lutoslawski.

The stand-out opera on our tour was Donizetti’s Lucia di Lammermoor, at the Dresden Semperoper. The production — gloomy, gruesome, and gorgeous — was directed by Dietrich W. Hilsdorf. It had the kind of European daring that American productions often lack. Picturesque tartans and baronial halls were nowhere to be seen: this dark Scottish drama played out in a disturbingly black, nearly empty box, harshly lit by vertical fluorescent tubes, amid a crowd of black-suited, vaguely Sicilian men. Sometimes painful, the mise-en-scène nonetheless perfectly suited the tragic story 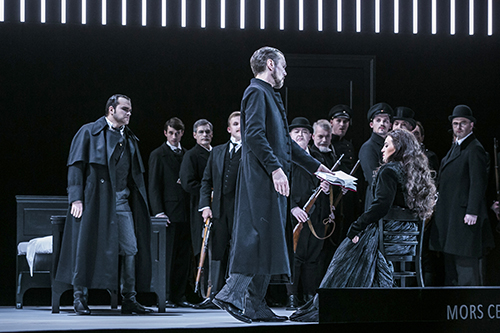 A telling decision, quite contrary to the libretto, was to have Lucia onstage for the first act to hear her manically possessive brother Enrico express his hope that she be struck dead by lightning rather than marry his enemy Edgardo. To force her to encounter her brother’s cruelty so directly and so intimately is to base the production from the very start in an Oedipal tragedy that pays off in the rest of the opera.

Though the staging was both inventive and insightful, it was also harsh, based in a fierce, in-your-face melodrama. That was especially true in the mad scene, when Lucia sings in her white wedding dress with a prominent bloodstain at the crotch (she has apparently castrated the husband that Enrico forced her to marry, and left him to bleed to death).

Dramatically something of a Grand Guignol extravaganza, the mad scene was nonetheless a musical triumph in the hands of Armenian-born soprano Nina Minasyan, a real rising talent who infused Donizetti’s melodies with heart-grabbing ornaments, and wove long, emotion-rich phrases with dramatic elegance. Bel canto singing can sometimes seem just a succession of pretty tunes and improbable outbursts of emotion, but Minasyan’s Lucia semed truly tragic.

Baritone Igor Golovatenko brought a moving depth to the role of Enrico — a villain still, but not a cardboard one — and tenor Liparit Avetisyan sang the role of Lucia’s doomed lover Edgardo with memorable pathos. On the podium, Stefano Ranzani found just the right tempo every time.

Two events we attended were less musical satisfying. I had been looking forward to hearing a Mass by the Czech composer Jan Dismas Zelenka, a contemporary of Bach who often worked in Dresden. Unfortunately, the spirited performance of his Missa Votiva, played on modern instruments, was pretty well defeated by the heavy reverberations in Dresden’s newly rebuilt and cavernous Frauenkirche. 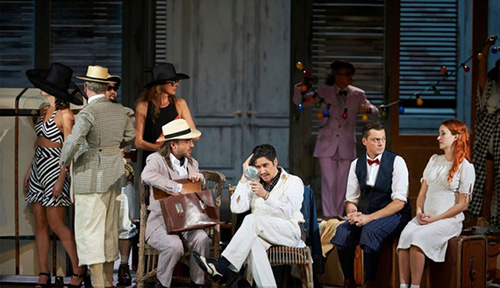 And who knew that it was possible for The Marriage of Figaro to be a disaster? The production we saw at Berlin’s Staatsoper Unter den Linden drained all significance from  Beaumarchais’ and da Ponte’s deadly serious comedy by presenting it as mere farce. Directed by Jürgen Flimm, it is astonishing that a production could ask us to laugh at rape in the days of #Me Too and the Kavanagh hearings. Even Mozart’s lovely and profound music fell victim to the tempi of conductor Alessandro De Marchi — sluggish when they needed to be sprightly, and hurried when they needed to transcend time. Anna Prohaska made an enchanting Susanna, and Dorothea Röschmann sang the role of the Countess with grace and dignity, staying well clear of the mad frenzy of the rest of the production.

Despite this misconceived Figaro, it was evident even in our short tour that classical music is thriving in the cities of former East Germany. We had a chance to speak with two orchestra musicians, who were proud of their orchestras and obviously happy to be working with them. It was evident, too, that members of these orchestras have a great deal more responsibility for management, personnel, and programming than in most American symphonies. Perhaps it’s no coincidence that they seem happier than many American counterparts. 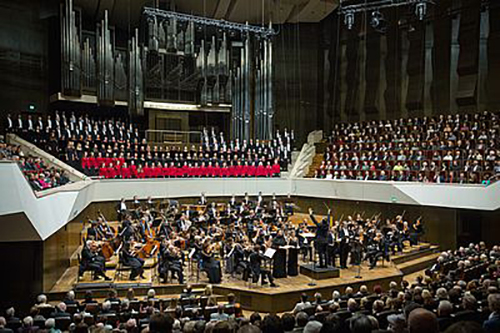 These cities have responded amazingly to the challenges of rebuilding after war, dictatorship, and reunification, and — as part of that rebuilding — they support classical music far beyond the tokenism we are accustomed to in the U.S. Indeed, the presence of classical music here goes further than orchestras, operas, and concert halls: we were grateful to Berlin for its wonderful museum of musical instruments, and to Leipzig for its three evocative house-museums honoring its great composers — Schumann, Mendelssohn, and Bach.

Is it too much to hope that in the United States of America, civic and national pride might similarly begin to support our musical heritage and talents, our composers, musicians, and audiences?

The cimbalom was the feature of the show, an instrument capable of taking on many personas. Its performer, Chester Englander, has shaped his career around the instrument, and has inspired composers to write more repertoire for it, some of which was presented on the program. END_OF_DOCUMENT_TOKEN_TO_BE_REPLACED

You wouldn’t expect that acoustic from a glance at the nave, which is wide and long, but not especially lofty. But when I guest conducted a local amateur choir and professional orchestra in Beethoven’s Mass in C there a few years back, during the first rehearsal we released the final chord of the “Gloria” and listened in astonishment for the next several seconds. The sound continued to roll down the space like the big wave that surfers dream about. END_OF_DOCUMENT_TOKEN_TO_BE_REPLACED