Many of the sounds heard at the Re:Sound New Music Festival performances at the Bop Stop and CODA on Saturday, June 9 were reminiscent of noises made by ‘90s computers and played on old science fiction space TV shows. Relying heavily on electronics and other sound-manipulation techniques, each artist or group gave festivalgoers a taste of their music in a series of increasingly strange and interesting pieces.

The 5:00 pm show at the Bop Stop began with ELCO, a trio from Pittsburgh, who performed Alan Tormey’s Second Commentary on the Natures of Realism (2014) on synthesizers and an ondes martenot. Meant to connect contemporary sonic realism, American Social Realism, and the musical grammar common in Soviet Realism, the piece features drawn-out tones mixed with rapid, repeating notes, all oscillating between foreground and background, between loud and soft.

After ELCO, the duo of saxophonist Phil Pierick and pianist Kurt Galván performed two works that explore the use of multiphonics, a method of playing multiple pitches at once. Pierick found notes on the saxophone, played with them, and then threw them away again in favor of a screech or whistle. Spindly and sparkling piano phrases were often overpowered by brassy, harsh outbursts from the sax.

Before her performance, pianist Brianna Matzke spoke about her Stockhausen Response Project, where she asks composers to write works for solo piano in response to Karlheinz Stockhausen’s Mikrophonie I, a composition for six players and one tam-tam. In Paul Schuette’s Puzzle Pieces and Molly Joyce’s Amplify (both from 2014), the goal was to get as many sounds as possible out of the piano with the help of electronic effects and, on the second piece, an accompanying track. And indeed, most of what came out did not sound like a piano at all, but more like robotic noises or a series of other percussion instruments. It was clear how much work went into playing with the electronics, and Matzke’s performance was very impressive.

The Syndicate for the New Arts rounded out the afternoon with some improvisation and the world premiere of ensemble member Jonn Sokol’s Above. The composition was inspired by the overhead lights he used to see in his then-infant son’s eyes when he needed to be rocked back to sleep. Sokol extended that thought to the cosmos: the piano texture was like the earth and sky, while the rest of the ensemble, playing bells (Justin Gunter), harp (Caitlin Mehrtens), and guitar (Joshua Rosner), created the sparkling, shimmering, strange galaxy above. 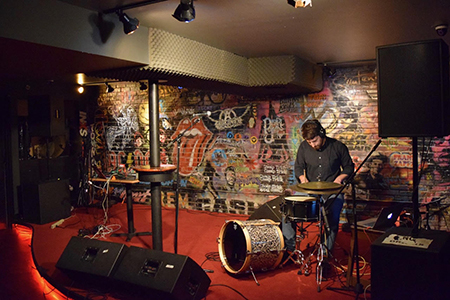 Later on Saturday evening, the Festival moved to Tremont for performances at CODA by Martha Mooke, Will Mason, and Joo Won Park. Mooke filled the basement bar with the surreal sounds of her electric viola, looping and distorting the tones with a variety of pedals. The performance involved her deft manipulation of those pedals as much as it did the actual playing of her shiny, curved instrument. The atmospheric feel of Mooke’s music was best expressed in Café Mars, a piece written with guitarist Randolph Hudson. She walked around the venue playing shrill, quick tones that crumbled into white noise. Returning to the stage for the jazzy tune that began the piece, she angled her eyes towards the ceiling to follow the notes as they faded up and away.

Mason’s Thet Thet (2017) consists of an electric tone combined with aggressive cymbal and snare hits. He described it as “repetitive and droney,” and said he wouldn’t be offended if the audience covered their ears since he knew it was loud. Sure enough, the performance gradually got louder until it reached deafening levels.

Mason also mentioned that it was meant to be a meditation on pitch-shifting on the snare drum. It did feel like an exercise, with the number of snare hits between cymbal rolls building tension by changing every so often. It was an absorbing piece for keen listeners who don’t mind plugging their ears.

Capping off the night was Park’s composition for electronics titled Touch, which featured “everyday objects” amplified using a program that he coded. In case you were wondering, a metal slinky sounds like rain hitting aluminum when magnified, and wind-up teeth make a truly horrendous noise. It was just as fascinating to watch him play the recorder, twist dials, adjust his computer, and slide levels up and down at an extremely fast pace, as it was to hear what he produced.

Many thanks to the Cleveland Uncommon Sound Project for an educational — if not bizarre — pair of concerts. Hopefully the Re:Sound New Music Festival continues to bring such interesting and diverse artists to Cleveland.

Photos of Brianna Matzke & Will Mason by Sophie Benn.

END_OF_DOCUMENT_TOKEN_TO_BE_REPLACED

Rodgers & Hammerstein’s Cinderella was originally produced for television in 1957 — seven years after the animated Disney film was released — and starred Julie Andrews. According to the Rodgers & Hammerstein website, it was viewed by over 100 million people. END_OF_DOCUMENT_TOKEN_TO_BE_REPLACED

The story line has its origin in an 1855 play and an 1842 farce that Thornton Wilder mined for his 1938 play The Merchant of Yonkers. When that turned out to be a flop, in 1954 Wilder made the crucial decision to re-center the show around the character of the legendary marriage broker Dolly Gallagher Levi and renamed it The Matchmaker. END_OF_DOCUMENT_TOKEN_TO_BE_REPLACED

The Dodero Center for the Performing Arts at the Gilmore Academy in Gates Mills is one feature of an impressive campus. The auditorium is shallow, the stage is deep, and the ensemble played without a shell. Throughout the program, the sound, especially in instruments’ lower registers, tended to disappear. END_OF_DOCUMENT_TOKEN_TO_BE_REPLACED