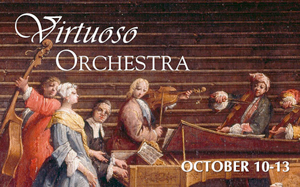 The theme, “virtuoso orchestra,” led music director Jeannette Sorrell to feature concertos in which Apollo’s Fire’s soloists could step forward and dazzle us as their counterparts 300 years ago must have done. It is a remarkable strength of this group that so many excellent soloists could emerge from the ranks of the orchestra, play these very challenging parts, and then rejoin the ripieno, as the back-benchers were called at the time (the word apparently derives from the Italian for “stuffing”!).

As the warm-up composer, Telemann got a bit short-changed, with only a single movement, a brilliant Vivace that lived up to its name (“lively”). Soloists were concertmaster Olivier Brault on violin and Kathie Stewart and Francis Colpron on flutes.

The Dresden composer, Heinichen, got more airtime. In selections from two concerti grossi, oboist Debra Nagy added her lyrical playing to the other soloists. The music, from a composer whom I was not familiar with, was galante, but not particularly memorable. A couple of pleasant pastoral movements brought to mind a shepherdess in Dresden china—lovely, fragile, and not quite at home in the modern world.

The first half of the program ended with Vivaldi’s familiar Concerto for Four Violins in B minor, in which Brault was joined by Johanna Novom, Julie Andrijeski, and Andrew Fouts. In each of the fast movements, Sorrell set a pace that kept these excellent players on their toes. The soloists seemed to enjoy the challenge and, indeed, delivered challenges of their own, daring and double-daring each other with increasing intensity and flourish.

After intermission, we traveled to two towns that seem to have had the least accomplished of the orchestras sampled in the program: Cöthen and Leipzig. The reason for going there, of course, is that the music for these orchestras was composed by the master, J. S. Bach.

The first piece by Bach was the prelude from the C minor suite for cello, played by René Schiffer. This single unaccompanied movement seemed out of place in a program that featured the interactions of soloists with orchestra.

In Bach’s C minor Concerto for Oboe and Violin, Nagy and Novom explored the rich contrapuntal world of Bach. Nagy’s oboe spun out silky and plangent tunes like the obbligati from the cantatas, while Novom’s violin played off these with more intricate and lively passagework. The work was treated with the seriousness that is its due, and was played with gratifying focus and ensemble.

The program ended with the fourth Brandenburg Concerto. Brault aced the very difficult violin part with its arpeggios and rapid scale passages. His partners on the front of the stage, Francis Colpron and Kathie Stewart on recorders, were equally dazzling in this highpoint of the recorder repertoire.

A spirited encore featured the whole group in a boisterous Appalachian dance tune with lots of fiddling and various hijinks.

Despite playing of the highest caliber, many of the solo parts in the concert did not carry well, at least to my seat in the eleventh row. The high ceilings and long nave of Fairmount Presbyterian—like that of many of the spaces that Apollo’s Fire plays in—swallow and muddy the sound.

Apollo’s Fire is to be congratulated for a recent coup, being signed on by the prestigious agent, Columbia Artists Management, which also manages such groups as the New York Philharmonic. The band has a number of tours planned with this new management, including an appearance at the popular BBC Proms concerts in August of 2015.

Sorrell announced from the stage that Apollo’s Fire will offer a local preview of the upcoming tour, which features the Brandenburg Concertos. The concert, at the Brecksville-Broadview Heights High School on Friday, Oct. 25, benefits the high school music program and is open to the public: more information is at www.apollosfire.org.

Jackson began the program with a recitation of Langston Hughes’ poem “Helen Keller” — the first of five poems by Hughes that served as interludes between each piece on the first half. END_OF_DOCUMENT_TOKEN_TO_BE_REPLACED

Pianos with pins and tape on strings, a bass drum and tam tam, crotales, Almglocken, and vibes. Microphones were hooked up all around the instruments. The feed was sent to speakers around the room. Lighting designer Nicholas Houfek hung incandescent globes over the arrangement of instruments from thin black wires stretching across the beams. END_OF_DOCUMENT_TOKEN_TO_BE_REPLACED

From the podium, Elim Chan set an ambitious tone for the evening. The rising star conductor, here in her Cleveland Orchestra debut, has a commanding style, and every twist and turn in Saturday’s performance tracked closely with her baton. END_OF_DOCUMENT_TOKEN_TO_BE_REPLACED