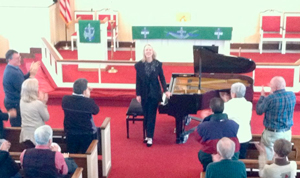 The room is not large, though the ceiling is lofty. The audience was good-sized for a February Sunday, but not numerous enough to need to be addressed as though it were a public meeting. And the piano, somewhere between a baby grand and a six-footer, was the sort of instrument you might encounter in someone’s living room.

Oltmanns took profit of all of those circumstances to spend an engaging hour communicating directly to her listeners, both through her flawless and eloquent playing and through her running commentary. Her remarks were pithy, apt and informative, and served to put her on an equal footing with the audience even though it was clearly her role to be the professor in the room.

The pianist began and ended her program with Chopin: the Fantasie Impromtu in c-sharp, op. 66 and the Scherzo in c-sharp, op. 39, explaining that both pieces featured a middle section in D-flat but of quite different character. She played op. 66 with graceful elegance.

Oltmanns went on to caution the audience that Beethoven’s “Waldstein” Sonata, op. 53 would require the most concentration on their part of any piece on the program, but went on to make their job easier with a performance remarkable for its clarity of concept and architectural coherence. The undersized piano responded bravely but was probably happy that the performer didn’t ask more of it than it had to offer.

Turning next to modern music, Oltmanns spoke fondly of George Crumb’s Morning Music from Markrokosmos II, noting that if you didn’t like it, it would only last two minutes. Demonstrating one way of “preparing” a piano, she tucked a sheet of paper among the strings, then gave an absorbing account of a little piece that even the most conservative listener could feel friendly toward.

After sharing a bit of biographical information about the ever-colorful Eric Satie, including his need to make some “money on the side” to support his absinthe habit, Caroline Oltmanns treated her listeners to an amusing journey through Je te veux, one such pot-boiler (or pour boirer?) that might have penetrated the smoky air at Le Chat Noir.

Oltmann’s last comments prefaced the Chopin scherzo and chronicled his attempted move to Mallorca to improve his health. Facing hostility from the natives, he, George Sand and her two children ended up exiled and pianoless in a convent where he wrote op. 39 with its chorale-like middle section. “It’s almost a religious experience,” she noted. And it was.

In response to an immediate standing ovation, Oltmanns offered a quasi-jazz encore, an exercise by Friedrich Gulda, who once taught Martha Argerich. That brought a near-perfectly proportioned Sunday afternoon piano recital to a fine conclusion.

END_OF_DOCUMENT_TOKEN_TO_BE_REPLACED

Composer John Harbison has done it all. His numerous awards include a MacArthur Fellowship and a Pulitzer Prize. He has written works for many of America’s leading musical organizations and has served as composer in residence with the Pittsburgh Symphony and the Los Angeles Philharmonic. His catalogue includes three operas, seven symphonies, twelve concerti, a ballet, six string quartets, numerous chamber works, and a large body of sacred music. On her latest CD, Late Air — Music by John Harbison, soprano and Oberlin voice professor Kendra Colton reminds us that the celebrated composer has a special talent for writing art songs — she also proves herself to be a sensitive interpreter of them. END_OF_DOCUMENT_TOKEN_TO_BE_REPLACED

END_OF_DOCUMENT_TOKEN_TO_BE_REPLACED

We begin with the world premiere recording of Okeanos, Bernd Richard Deutsch’s concerto for organ and orchestra, featuring Paul Jacobs as soloist. The title refers not only to the Titan of Greek mythology, but also “to an idea of immense (and sometimes unfathomable) greatness and breadth, which conjures up in my mind the thought of the organ,” as Deutsch writes in his notes. END_OF_DOCUMENT_TOKEN_TO_BE_REPLACED

If you haven’t already warmed up to French Baroque clavecin music, Chicago-based keyboardist Jory Vinikour’s L’Unique: Harpsichord Music of François Couperin should make a strong impression on your musical tastes. The most prominent member of a musical dynasty second only to the German Bachs, François Couperin left a large treasure trove of keyboard works, 234 in all, arranged in 24 suites or Ordres.  END_OF_DOCUMENT_TOKEN_TO_BE_REPLACED