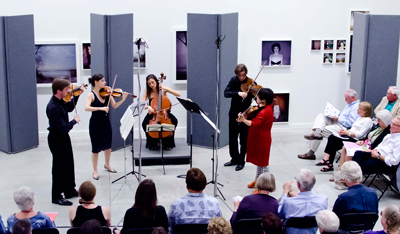 In only its second season, ChamberFest Cleveland is already a summer musical force to be reckoned with. The brainchild of Cleveland Orchestra clarinet principal Franklin Cohen and his daughter, violinist Diana Cohen, the festival is akin to such notable gatherings as Rudolf Serkin’s Marlboro or Benjamin Britten’s Aldeburgh, where the founders invite a “family” of musical guests — in this case, mostly rising artists — attuned to their own artistic goals, with a variety of programming in interesting venues.

The second concert of the 2013 season took place on Friday, June 21, at 9:00 pm (the better to enjoy the Summer Solstice sunlight?) at the Transformer Station, a new Ohio City gallery on W. 29th Street a block south of Detroit Avenue, developed by art collectors Laura and Fred Bidwell in collaboration with the Cleveland Museum of Art. (For more on the Transformer Station, click here.) The elegant, newly-constructed west gallery, a tall, white cube with high-set rectangular windows, was packed, the audience surrounding the performers on three sides. Before and after the concert, and during intermission, the audience was able to view the Transformer Station’s current exhibitions. The audience was an interesting cross-section of ages and kinds of listeners, from college-age young people hipsters to veterans of Cleveland’s musical elite listening population. There was equal enthusiasm for both the familiar and unfamiliar works on the program.

The concert opened with a repeat of Mozart’s Quintet for Two Violins, Two Violas and Cello in g, K. 516, which had been performed the previous night by the same musicians (David McCarroll and Diana Cohen, violins; Yura Lee and Dimitri Murrath, violas; and Julie Albers) at CIM’s Mixon Hall. One can be certain that the effect was quite different here, in the intimacy of the gallery, only a few feet from the performers. The drama and emotion of Mozart’s music were etched in bold relief. There were no spacious acoustics to blend the sound. Any imperfections would have been obvious. In this case, however, the performers were in remarkable expressive unanimity. Mozart’s use of silence in the third movement Adagio was especially striking here. The fourth movement begins with a doleful adagio violin solo in g minor, but then Mozart shifts to the relative key of G major in a bright rondo to conclude the quintet.

Yura Lee returned in Alfred Schnittke’s A Paganini for solo violin, a virtuoso showpiece in the spirit of Nicolò Paganini’s famous early nineteenth-century solo violin Caprices, but updated to a modernist idiom, and with all the extended techniques available to the modern violinist. There were a few fleeting references to Paganini’s own music, but the music, while austere, was arresting in its brilliant flights of fancy. Ms. Lee gave a bravura performance, earning a standing ovation.

Following intermission Mr. McCarroll and Mr. Murrath were joined by violinist Ying Fu and cellist Gabriel Cabezas in a ravishing performance of Leos Janacek’s String Quartet No. 1, “After Tolstoy’s The Kreutzer Sonata.” The quartet takes its inspiration from Tolstoy’s short story about a marriage gone bad, and reflects similar themes found in Janacek’s opera Katya Kabanova. The music of the quartet is instantly identifiable as Janacek’s, with its broad melodies interrupted by skitterish, arpeggiated ostinati traded among the players that give a nervous energy to the music.

The first movement has an ecstatic quality, with moments of repose. The second movement is neurotic in its episodic mood changes. In the third movement the music becomes more terse and dramatic, with thicker instrumental textures and violent outbursts, ending mysteriously. The closing fourth movement is an adagio that reaches a thrilling climax by way of lyrical melody reminding this listener of the closing orchestral coda of Janacek’s opera, The Makropulos Case. The quartet ends quietly, but without clear resolution. These four musicians were attuned to the idiosyncratic brilliance of Janacek’s music, and to each other as the performance progressed. In an evening of excellent performances, this quartet was the highlight, at least for this listener.

Ms. Lee and Mr. Murrath returned to close the concert with Norwegian violinist and conductor Johan Halvorsen’s arrangement of the Passacaglia from George Frideric Handel’s Suite No. 7 in g, for harpsichord, composed in 1717. A set of variations based on a recurring harmonic sequence, the transcription for violin and viola was remarkably faithful to Handel’s own keyboard writing, with the two string players furiously tossing phrases back and forth as the variations become ever more complex.

This concert was a successful collaboration with the Transformer Station; yet I had some reservations about the logistics. The space was filled to capacity, and the closeness of audience was both an advantage and disadvantage. Every note was “right there,” but the music didn’t have enough space to blend at such close proximity. The space was designed as a gallery, not as a concert hall, so the air conditioning system was (rightly) turned off before the concert, but then the space became quite stuffy on a warm summer night. Perhaps the organizers might consider limiting audience size even more.

The Ohio City neighborhood, trendy though it is, also happens to be under the normal flight pattern to Cleveland Hopkins Airport, so at least one plane held up the proceedings momentarily until it was more or less out of earshot. Yet these are minor quibbles over what was a highly successful venture in a major new summer cultural event.

The Cleveland Orchestra’s second performance of the new season on Sunday afternoon, October 17 at the newly renamed Mandel Hall at Severance Music Center was just such an occasion. If the ensemble’s return to public concerts under the baton of Franz Welser-Möst wasn’t enough reason to light a bonfire, the Cleveland debut of a new work written for one of the Orchestra’s most popular soloists, and the swan song of one of its longest-serving members added extra fuel to the celebration. END_OF_DOCUMENT_TOKEN_TO_BE_REPLACED

Cleverly, CityMusic’s latest concert led listeners through these changes one step at a time. “Musical Matrix” took transformation as its theme, and each piece on the October 2 program at the Maltz Performing Arts Center (the second of two performances) put its spin on the subject. END_OF_DOCUMENT_TOKEN_TO_BE_REPLACED