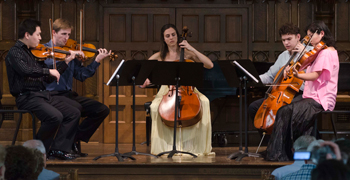 After opening with two intense concerts on Thursday and Friday, the musicians of ChamberFest Cleveland 2013 let their hair down on Sunday. This was my first opportunity to attend this second year of Franklin and Diana Cohen’s ambitious and highly successful venture, and it was a pleasure to be there with a hall full of Cleveland’s seasoned musical connoisseurs. In addition, thanks to the festival’s decision to give free tickets to 18-and-unders, there were a bunch of youngsters in the audience.

The first half was for strings only. The concert opened with a Boccherini quintet from Opus 11, the one with the famous Minuet that every beginning violinist learns. It is not a demanding piece, technically, but the excellent players brought to it every bit of their formidable technique anyway. Scrupulous attention to Boccherini’s dynamics made the most of his pre-Romantic expressionism, rich with ebbs and flows. I remembered why the minuet is so famous: it is a perfect evocation of a moonlit and nightingale-accompanied evening in a Spanish garden (Boccherini, though Italian, spent much of his life working in Madrid).

ChamberFest brings spectacular young players to Cleveland. Especially apparent on Sunday was the virtuosity and musicianship of the violinist Yura Lee, who joined Diana Cohen for the Prokofiev two-violin Sonata, Opus 56. The serenity of the Boccherini was replaced by a concentrated, crucible-like intensity in this duet, written in 1932 as Prokofiev was leaving Paris (and modernism) to return to the Soviet Union. The players made the most of the imitative structure of the piece — one violin leads with a motif, the other transforms it, the first joins in again, and they launch into a complicated and thrilling chase. There were fast and furious parts, jazzy riffs, and — to my ear, the most effective — the elegiac lamentation that so often sprung from Prokofiev’s big heart.

Beethoven’s Variations on an Original Theme, though labeled Opus 44, is actually a very early piece, and rather a silly one, an opportunity for much virtuosic fluff. Here, it was delightfully entertaining in the hands of pianist Orion Weiss, violinist Ying Fu, and cellist Gabriel Cabezas. Several episodes in the minor keys gave some indication of the potential of its young composer for a higher level of profundity. Mostly, though, it was a joyous and not terribly consequential romp — perfect for a summer Sunday afternoon.

Franklin Cohen brought three of his (very advanced) students out for two lively pieces for four clarinets, both from Eastern European composers of the present day. These were the danciest portions of the afternoon (the “Let’s Dance” theme was less than fully descriptive of the rest of the concert; though we had been invited to use the aisles if so moved, I did not see anyone tripping the light fantastic). Here we had a band of four guys in constant motion, clarinets burbling and chromatically cascading, jazzing and generally showing off. Their joy in playing was obviously shared by the audience’s pleasure in listening.

The last piece in the program was a lovely quartet for piano, clarinet, violin and cello by Peter Schickele – yes, the jokester who impersonates “P. D. Q. Bach,” but here in his own name as a “serious” composer. Fortunately, though, not too serious: this quartet featured Schickele’s chameleon-like ability to vary his style — now elegiac, now modal, now jazzy. The effect was light, virtuosic, and highly entertaining.

CWRU’s Harkness Chapel is a pleasing venue in many ways, but its acoustics are seriously compromised by the high level of white noise produced by the air conditioning. The university would do well to look into better ways to move the air.

END_OF_DOCUMENT_TOKEN_TO_BE_REPLACED

The Orpheus myth inspired French Baroque composers Jean-Philippe Rameau and Philippe Courbois to write expressive solo cantatas about the famous Greek musician-poet and his futile attempts — because of his own impatience — to rescue his beloved Eurydice from the grasp of Pluto in the Underworld. These are beautifully performed by the clear-voiced soprano Hannah De Priest and the velvet-throated baritone Jonathan Woody (who makes a walk-on appearance in the Rameau). END_OF_DOCUMENT_TOKEN_TO_BE_REPLACED

Now that live concerts are beginning to proliferate, it was delightful to hear Oberlin cello professor Darrett Adkins ring a change on the solo suite format with his Hypersuite No. 3 on September 28 in the Cirigliano Studio Theatre at Lorain County Community College. His program opened the new season of Signature Series performances in Elyria, and was dedicated to the memory of Eva Hornyak. END_OF_DOCUMENT_TOKEN_TO_BE_REPLACED