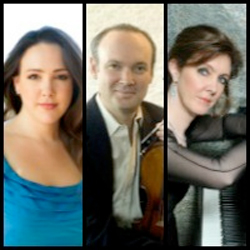 Susanna Phillips is on a roll: she recently starred at the Metropolitan Opera as Fiordiligi in Mozart’s Così fan tutte, as part of conductor James Levine’s anxiously awaited return to conducting at the Met, and on New Year’s Eve upcoming she will star as Rosalinde in a new production of Johann Strauss’s Die Fledermaus. This past Monday evening, October 15, she presented a most unusual, but highly enjoyable, concert with collaborators Anne-Marie McDermott, piano, and Paul Neubauer, viola, as the first concert of the Cleveland Chamber Music Society’s 2013/14 season, at Plymouth Church of Shaker Heights.

The concert was unusual in a couple of ways. First, the pairing of soprano and viola is not commonly heard, but proved to be felicitous. Second, Ms. Phillips and friends performed a program of mostly “light” music – songs of an earlier era, intended to please and entertain and not stress the listener. Only one of the numbers was originally written for voice, viola and piano (more on that later). Most of the viola obbligati were found or devised by Mr. Neubauer, who is acclaimed in his own right as an orchestral musician and soloist. Mr. Neubauer and Ms. McDermott both had their opportunities to shine as soloists during the course of the evening.

The concert opened with Harry Williams’s World War I hit “It’s a Long Way to Tipperary.” Mr. Neubauer not only played a spritely countermelody, he also got to sing a verse or two. Edwin Greene’s touching lullaby/waltz “Sing Me to Sleep” of 1902 (but also popular during World War I) was made famous by early recording stars soprano Alma Gluck and her husband, violinst Efrem Zimbalist. The third song of the opening set was another WWI favorite, “Roses of Picardy.” There might have been high camp possibilities with these songs, but Ms. Phillips and her collaborators took them at face value and performed them with sincerity. Ms. Phillips has a clear lyric soprano voice, even from the bottom to the top of her range, but with plenty of sound that filled the church (and likely the vast spaces of the Metropolitan Opera house.)

Robert Schumann’s four character pieces, Märchenbilder (Fairy Tale Pictures), op. 113, for viola and piano, followed. Two of the movements are said to depict Rapunzel, the third, Rumpelstiltskin, and the fourth, Sleeping Beauty. These pieces are not trifles, however, and Mr. Neubauer and Ms. McDermott gave them sensitive readings, emphasizing the interplay between the viola and piano. This was collaborative music-making at its best.

Ms. Phillips returned for four Russian songs by Sergei Rachmaninoff and Anton Arensky. (Although these songs might have been sung as part of early twentieth-century salon music concerts, it is likely that they would have been performed in English or German translation. Ms. Phillips opted for the original Russian.) Rachmaninoff’s “Ne poy, krasavitsa, pri mne” (“Do not sing, my beauty, to me”) was intense and dramatic, and showed Ms. Phillips’s skill at floating soft high notes. Arensky’s song “Lándysh” (“Lily-in-the-valley”) was notable for the author of its text: Piotr Ilich Tchaikovsky. Two more Rachmaninoff songs completed the first half of the program. The second, “Vesennye vody” (“Spring waters”) featured a virtuoso accompaniment depicting the flowing mountain streams and the coming of Spring depicted in the text. Here, as elsewhere in the concert, Ms. Phillips seemed genuinely to be enjoying herself during her performance. She smiled at the audience, and all three of the performers at one point or another gave remarks about the music being performed.

The second half of the program began with two songs by Charles Gounod: his arrangement of Bach’s C major Well-tempered Clavier prelude fashioned into an accompaniment for the Ave Maria text. A first stanza was played as a viola solo with piano, followed by Ms. Phillips on the text with an obbligato by Mr. Neubauer. Ms. Phillips voice gleamed at the high note climax of the piece. Who would have thought that such a tired old warhorse could be given fresh new life? The second Gounod work was a rarity (and, as mentioned above, the only song originally for soprano, viola and piano): “Evening Song,” whose text in English by Adelaide Anne Proctor was set by Gounod during a sojourn in London. Mr. Neubauer described his saga of trying to track down the music score of the song, going to great lengths to search high and low, only to find it hiding more or less in plain sight in the Lincoln Center Library, only a few steps from where he teaches at the Juilliard School. It was, in fact, pretty, but inconsequential.

Schumann’s song “Widmung” (“Dedication”) was followed by Franz Liszt’s solo piano transcription of the song. Ms. McDermott’s intense performance had just the right combination of virtuosity and sensitivity to the original song.

The remainder of the program was devoted to popular Italian songs of the late 19th and early 20th centuries. The songs, by Tosti, Cesareo, Mazzoni, Marcello and de Curtis, are perhaps more familiarly sung by men’s voices, but Ms. Phillips made them convincing. Not timeless masterpieces, perhaps, but their heart-on-sleeve emotions and the imaginative accompaniments are hard to resist, especially the “strumming” piano part in Cesareo’s “La serenata” and the streaming barcarolle-like “La Serenata” by Marco Marcelliano Marcello.

As an encore, Ms. Phillips and company returned for a stylishly jazzy rendition of George and Ira Gershwin’s classic “Our Love Is Here to Stay.”

The cimbalom was the feature of the show, an instrument capable of taking on many personas. Its performer, Chester Englander, has shaped his career around the instrument, and has inspired composers to write more repertoire for it, some of which was presented on the program. END_OF_DOCUMENT_TOKEN_TO_BE_REPLACED

You wouldn’t expect that acoustic from a glance at the nave, which is wide and long, but not especially lofty. But when I guest conducted a local amateur choir and professional orchestra in Beethoven’s Mass in C there a few years back, during the first rehearsal we released the final chord of the “Gloria” and listened in astonishment for the next several seconds. The sound continued to roll down the space like the big wave that surfers dream about. END_OF_DOCUMENT_TOKEN_TO_BE_REPLACED