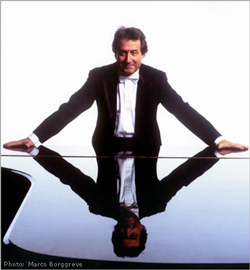 Welser-Möstled a bold and sweeping account of the Sibelius (No. 4, from Legends, Op. 22) to begin the program. Emphasizing the dark, serious nature of its opening bars, he coaxed expressive, colorful sounds from the orchestra, full of rhythmic vigor and effective dynamic contrasts.

Buchbinder played Rachmaninoff’s popular Rhapsody in a straightforward manner, but still full of interest and excitement. Rather than treating the entire piece as a virtuoso vehicle, he allowed for a logical, organic development as one variation progressed to another. His Tempo di minuetto variation may have seemed a bit quicker than most, but it was a natural outgrowth from what had come before.

Another variation which seemed a bit faster than normal was the lead-in to the 18th variation. Buchbinder gave it a sense of forward motion toward the inevitable, which created a resplendent arrival in D-flat major. Poetic and tender in his approach , he made it sound as if we were hearing it for the first time. Elsewhere, the pianist unleashed barrages of octaves, cascades of sparkling notes and marcato chords. Conductor and orchestra were consummate partners, adding excitement and brilliance to a masterful performance.

After intermission came the United States premiere of Locke’s Theatre by Ryan Wigglesworth, the Orchestra’s Daniel R. Lewis Young Composer Fellow for the 2013-14 and 2014-15 seasons. Written to celebrate the 100th anniversary of Benjamin Britten’s birth, the piece was inspired by Matthew Locke’s incidental music to Shakespeare’s The Tempest.

“The First Music” begins with a drone, crescendoing to a brilliant, mystical section with bells, celesta and percussion. In “Rustic Music,” aggressive sections alternate with sustained passages, separated by pauses and episodes of cacophony. The final “Curtain Music (with Storm)” includes swooning sighs and swoops in the strings, expressive solos by individual players, hushed effects in the low strings, wind chimes, barbaric poundings and a myriad of percussion effects. Welser-Möst conducted it clearly, keeping the obvious complexities and difficulties of the music under careful control. The composer was present to take a bow.

Britten’s Spring Symphony is a large-scale, forty-five minute work setting words by a variety of English poets which the chorus presented with impeccable diction. They sighed expressively in the Introduction: Shine Out, and impressed throughout the entire work with their superb balance and blend. John Tessier’s rich, reedy tenor voice projected expressively and effortlessly as did Jamie Barton’s creamy mezzo-soprano. The children’s voices — and their playful whistling — lent a fresh and pure sound to The Driving Boy, as did the clear-voiced soprano of Kate Royal.

Welcome, Maids of Honour featured resonant low strings and trickling woodwind writing plus the harp which enhanced Barton’s solo. The chorus’s heavenly opening of Out on the lawn I lie in bed was met by a lush orchestral chord and closed with a hauntingly pianissimo from the women’s voices.

Driving triplet patterns and harp pulses created a sense of urgency at the opening of Part III, which continued with an exuberantly rhythmic Sound the Flute! Blaring low brass calls added to the festive mood. The Finale: London, to thee I do present included a cow horn, and reached a glorious climax as Welser-Most led his combined forces in an ecstatic celebration of the arrival of summer.

END_OF_DOCUMENT_TOKEN_TO_BE_REPLACED

Rodgers & Hammerstein’s Cinderella was originally produced for television in 1957 — seven years after the animated Disney film was released — and starred Julie Andrews. According to the Rodgers & Hammerstein website, it was viewed by over 100 million people. END_OF_DOCUMENT_TOKEN_TO_BE_REPLACED

The story line has its origin in an 1855 play and an 1842 farce that Thornton Wilder mined for his 1938 play The Merchant of Yonkers. When that turned out to be a flop, in 1954 Wilder made the crucial decision to re-center the show around the character of the legendary marriage broker Dolly Gallagher Levi and renamed it The Matchmaker. END_OF_DOCUMENT_TOKEN_TO_BE_REPLACED

The Dodero Center for the Performing Arts at the Gilmore Academy in Gates Mills is one feature of an impressive campus. The auditorium is shallow, the stage is deep, and the ensemble played without a shell. Throughout the program, the sound, especially in instruments’ lower registers, tended to disappear. END_OF_DOCUMENT_TOKEN_TO_BE_REPLACED