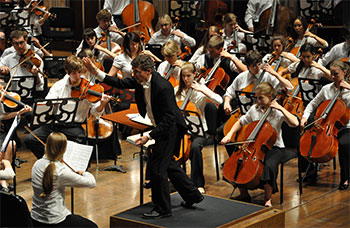 Peter Slowik’s Credo Chamber Music summer programs — a blend of musical training and performance and service opportunities with an evangelical Christian foundation — are in expansion mode. This summer’s sessions in Oberlin increased from three weeks to four and the grand finale concert at Severance Hall, which last year featured works for chamber ensembles plus a full orchestra performance of Tchaikovsky’s fifth symphony, morphed this time around into a challenging symphonic program including a Rossini overture, a string suite by Gustav Holst and a Dvořák symphony.

Most summer music camps culminate in a celebratory concert, but few have the luxury of holding that event in such an opulent venue as Severance Hall. The young musicians of Credo seemed positively giddy with the robust sounds they could produce there, and the small but enthusiastic crowd who turned out applauded their efforts ardently.

Credo has a long history as a program for string players, and it’s no surprise that the ensemble that arranged itself onstage last Saturday evening was heavy on violins, violas and cellos chosen from among the three-week chamber music program participants. A normal complement of double basses, winds and brass completed the orchestra. Though the string players had spent a month in Oberlin, winds and brass joined them only for the final week, resulting in an orchestra whose strings achieved a stronger sense of ensemble than the other players. But enthusiasm abounded and made up for many shortcomings in blend, balance and cohesion.

Rossini’s famous William Tell Overture began the evening with rich and gorgeous playing from the cello section and an admirable solo by the unnamed principal cellist (everyone was listed alphabetically in the program). Similarly distinguished solos by flute and English horn followed in the pastoral scene, though Slowik might have given them more breathing room by relaxing the tempo. Trumpets blazed in like a cavalry charge to set up a thrilling finale with expert violin playing in the middle section.

Winds, brass and percussion disappeared as the strings took over for Gustav Holst’s Saint Paul Suite, named for the London girls’ school where the composer taught for thirty years (and where he wrote The Planets between lessons). Here, the strings really had an opportunity to show their collective prowess, producing a big, rich sound that sometimes worked at odds with more delicate material. The finale (borrowed from the first military band suite), Holst’s clever pairing of a 16th century dance tune, Dargason, with the contemporary song, Greensleeves, though spirited, suffered a few moments of rhythmic imprecision.

After intermission, Dvořák’s exuberant eighth symphony was the perfect match for a stageful of enthusiastic young players who fearlessly and skillfully addressed its challenges. Here, Slowik encouraged some over-the-top playing which, while thrilling, was almost consistently at the loud end of the dynamic scale and at times nearly deafening (the first bassoonist spent most of his free moments fiddling with his ear plugs!)

Not to say that there weren’t quiet moments. During one of those, alas, a twenty-something couple queried an usher, talked among themselves while taking seats in the front row of the dress circle, then let a cell phone with an obnoxious ring tone peal out for a good fifteen seconds, after which they merely turned and smiled at each other.

Next year, Peter Slowick writes, Credo will perform Haydn’s Creation in Severance Hall, another opportunity for expansion of its mission and program that we’ll look forward to hearing.

It might seem that there’s not a lot left to discover after three decades of experience with the Red Priest’s charming and evocative score, but this performance boasted a secret weapon: the young Spanish violinist Francisco Fullana, now the Orchestra’s artist-in-residence, whose affecting personality and easy virtuosity raised the solo part a quantum leap above the merely extraordinary. END_OF_DOCUMENT_TOKEN_TO_BE_REPLACED

END_OF_DOCUMENT_TOKEN_TO_BE_REPLACED

The Cleveland Orchestra’s second performance of the new season on Sunday afternoon, October 17 at the newly renamed Mandel Hall at Severance Music Center was just such an occasion. If the ensemble’s return to public concerts under the baton of Franz Welser-Möst wasn’t enough reason to light a bonfire, the Cleveland debut of a new work written for one of the Orchestra’s most popular soloists, and the swan song of one of its longest-serving members added extra fuel to the celebration. END_OF_DOCUMENT_TOKEN_TO_BE_REPLACED