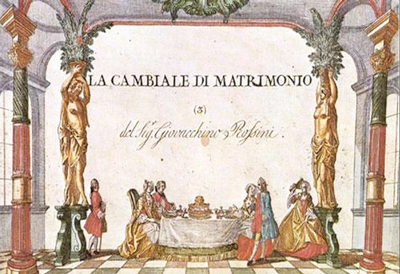 After a nearly thirty-year absence, vocal music returned to the Kent/Blossom Festival on Saturday, July 18 in Ludwig Recital Hall, and what an enjoyable afternoon it was. In fact, there are so many good things to say it’s difficult to know where to begin. Let’s start with the delightful musical selection — Rossini’s first professional opera, La Cambiale di Matrimonio or The Marriage Contract, performed in a costumed concert version sung in Italian with English supertitles (Sarah Harvey).

Written when the composer was eighteen years old, this one-act comic opera, with a libretto by Gaetano Rossi, is set in the London home of Tobias Mill, an English merchant, who has arranged for his daughter Fanny to marry the merchant Slook, from the exotic country of Canada. However, Fanny is really in love with the penniless Edward Milfort. After a lot of deceit and double-crossing — resulting in nearly everyone wanting Slook dead — including Mill’s clerk Norton and Fanny’s chambermaid Clarina — Mill then threatens Slook to a duel. Fortunately, Slook replaces Mill’s pistol with a peace pipe, which Mill grabs, not realizing what it is. Needless to say, all ends happily.

The cast (coached by Levi Hammer) was uniformly excellent both in vocal and acting prowess. Bass-baritone Frank Ward Jr. and baritone Brian Keith Johnson were equally masterful at portraying Mill and Slook, two buffoons who were entirely clueless about Fanny’s distaste at being treated like a bundle of merchandise. The two were vocally commanding throughout, especially during their spectacular duet. Soprano Lara Troyer brought elegance to the role of Fanny, and tenor Timothy Culver portrayed her love-struck suitor Edward Milfort with impish charm. Vocally, they were equally splendid. Their love duet was a musical highlight. Mezzo-soprano Denise Milner Howell was a sympathetic Clarina, and baritone Benjamin Czarnota was genial in the role of the dutiful Norton. They too were vocally superb.

The decision to replace the recitatives with spoken dialogue was brilliant. It allowed the cast to totally embody their characters in hilarious ways. I’m not sure exactly what accent Brian Keith Johnson was imitating, but it didn’t matter. It added just the right amount of over-the-top comedy. The use of English dialogue also allowed the audience to more fully engage with the zany plot.

The Kent/Blossom Music Festival Chamber Orchestra, under the watchful eye of Charles Latshaw, sounded magnificent. The musical coordination with the cast was flawless, and the balances were perfect. There were many finely played solos, especially from Josiah Bullach, who made easy work of some fiendish horn lines.

It’s too bad La Cambiale di Matrimonio is so rarely performed. It is a little gem of an opera which shows that the young Rossini had already found his voice as a composer. Hats off to the Kent/Blossom Festival for bringing it out of the filing cabinet, and for their entertaining and musically outstanding performance.

END_OF_DOCUMENT_TOKEN_TO_BE_REPLACED

Rodgers & Hammerstein’s Cinderella was originally produced for television in 1957 — seven years after the animated Disney film was released — and starred Julie Andrews. According to the Rodgers & Hammerstein website, it was viewed by over 100 million people. END_OF_DOCUMENT_TOKEN_TO_BE_REPLACED

The story line has its origin in an 1855 play and an 1842 farce that Thornton Wilder mined for his 1938 play The Merchant of Yonkers. When that turned out to be a flop, in 1954 Wilder made the crucial decision to re-center the show around the character of the legendary marriage broker Dolly Gallagher Levi and renamed it The Matchmaker. END_OF_DOCUMENT_TOKEN_TO_BE_REPLACED

The Dodero Center for the Performing Arts at the Gilmore Academy in Gates Mills is one feature of an impressive campus. The auditorium is shallow, the stage is deep, and the ensemble played without a shell. Throughout the program, the sound, especially in instruments’ lower registers, tended to disappear. END_OF_DOCUMENT_TOKEN_TO_BE_REPLACED