In its concerts this weekend, Apollo’s Fire burnt bright with the intensity of the mature Haydn and the brilliance of the young Mozart (not that he was ever old, alas!)

This winter has seen Cleveland’s baroque orchestra presenting “intimate” concerts of Vivaldi and Bach with reduced forces, perhaps for budget reasons. By contrast, this concert assembled a big band—almost thirty instrumentalists—fitting for late 18th-century operatic and symphonic literature. The investment in such a richness of talent paid off in an extraordinary mixture of precision, energy, and richness.

Full string sections were backed by pairs of natural horns and paired woodwinds—baroque bassoons, oboes, and flutes. In Oberlin’s Finney Chapel—acoustically clear and relatively dry—the group could play at faster tempos than in the resonant churches in which Apollo’s Fire normally performs, and with a tighter sense of ensemble.

This was Apollo’s Fire at its best: crisp, exciting, and beautifully transparent. Bass lines energized the music from below; in the middle, inner voices shone through with ease; oboes, flutes, and violins dazzled with rapid and always-varying intricacies.

Music director Jeannette Sorrell—for these concerts, not conducting from the harpsichord— energized the entire group with forceful and intelligent leadership.

The program began with the overture to an early Mozart opera (La finta semplice)—not at all bad for music from a boy of twelve years old!

For all its precocity, though, the Mozart overture was overshadowed by a Haydn overture (to the 1799 opera L’isola disabitata). It was clearly the work of a master who knew how to spin diverse threads together—delicacy in the violins, dissonant tension in the harmonies (as in the famous beginning of The Creation), and contrapuntal energy across the whole group.

The orchestral highpoint came with selections from Haydn’s E minor Symphony 44 (“Trauer,” or “Mourning”), a fully mature work from that prolific master, and one seldom heard. Given the profound emotions apparent in these two movements, we could well have heard more. Especially notable was the solo work on the natural horn by Todd Williams.

Another orchestral offering was a little-heard Mozart symphony (number 33 in B flat, K. 319), played in its entirety. For me, the take-away movement, as so often, was the Andante, startling in its sonic inventiveness and variety.

The orchestral selections were, in themselves, a satisfying interplay of these two great composers, who, as the program notes indicated, knew and respected each other profoundly. 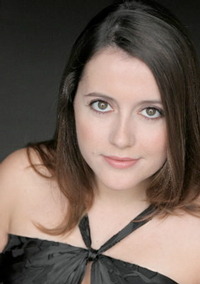 But in addition, we were treated to the stunning voice of soprano Amanda Forsythe, one of the stars in the constellation of young early-music opera singers.

I was fortunate to hear her two years ago as Niobe in Steffani’s opera of the same name, at the Boston Early Music Festival. Hers is a coloratura of the highest degree of refinement: crystal clear, stunningly limpid, and capable of managing virtuosic fireworks with utter ease.

She sang two recitative-arias from Mozart’s little-known opera Lucio Silla (he was sixteen). Nobody in the audience cared that the music was derivative, stuck in the 18th-century conventions of heroic opera. Ms. Forsythe gave us a rendition of pyrotechnics (the Queen of the Night had nothing on this material) that convinced us of its value, even as we recognized the immaturity of the composer. Staccato arpeggios, long legato lines, a mad scene with its requisite oddities — all were entirely enthralling.

Ma. Forsythe also sang an aria from the Haydn opera of which the orchestra had played the overture, in which an ingénue (a girl who has never seen a man!) enjoys a heightened experience of first love.

The show-stopper, though, was Ms. Forsythe’s ravishing performance of the familiar Mozart “Alleluia” from Exsultate, Jubilate (K. 165). Here the young Mozart, exuberant and showy, found an interpreter who manifested that youthful energy with elegance, joyfulness, and apparent ease.

Ms. Forsythe came back on stage after the “Alleluia” for an encore, Cherubino’s charming aria “Voi che sapete” from The Marriage of Figaro, sung with a nice combination of naivete and passion.

As a member of the Oberlin faculty myself, I hope I may be forgiven in pointing out (as did Ms. Sorrell) that almost half the performers were Oberlin graduates or faculty members.

Photo from an earlier performance in Finney Chapel.