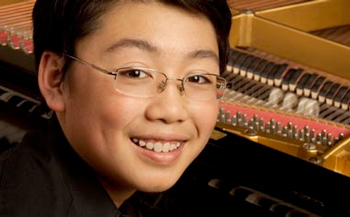 Since 1878, Oberlin College’s Artist Recital Series has presented performances by some of the world’s finest musicians. On Saturday evening, March 1, the audience in Finney Chapel had the special opportunity to hear a recital by an artist just beginning his career. George Li was 14 when he won first-prize in Oberlin’s inaugural Thomas and Evon Cooper International Competition in 2010. Now 18 and a joint student at Harvard and the New England Conservatory, Li has since won the prestigious Young Concert Artists auditions.

The first half of the recital included works by Beethoven and Schoenberg, the foremost composers of what we now call the First and Second Viennese Schools. Arnold Schoenberg’s, Sechs Kleine Klavierstücke (Six Little Piano Pieces), op. 19, opened the program. Together, the six pieces last only about four minutes and are excellent examples of expressionism in music — the kind of music that makes the listener hold his breath in wonder or awe. Li’s playing was marked by a high degree of sensitivity.

The Schoenberg was followed by an unusually coherent reading of Beethoven’s Sonata in C Minor, op. 111. Li performed the allegro con brio part of the first movement with great taste — playing forcefully but always musically. He found elegant lyricism in the second movement.

Both the Schoenberg and Beethoven demonstrated restraint in their own way. The conciseness of Schoenberg’s musical economy and the classical aesthetics of Beethoven were clearly reflected in Li’s playing.

The remainder of the program could be called the ‘pyrotechnical’ section. Two fiendishly difficult works demonstrated George Li’s command of the piano, and again reminded the audience why he won the Cooper Competition.

This half of the evening was devoted to two compositions, Rachmaninoff’s Variations on a theme of Corelli, op. 32, and Ravel’s La Valse. No longer a single solo instrument as earlier in the recital, the piano now became an orchestra with rich timbres and louder dynamics.

Rachmaninoff’s treatment of the La folia tune used by Corelli in one of his violin sonatas expands the chromaticism, uses more complex chords and utilizes the entire range of the piano, giving Li the opportunity to show his musical and technical prowess.

Ravel himself made the solo piano transcription of his well-known orchestral work. Li’s performance was stunning. He surmounted all of Ravel’s technical difficulties with apparent ease.

The audience gave Li an enthusiastic standing ovation. Li showed his youthful energy by performing two encores to the delight of all. The first was Liszt’s arrangement of Schumann’s Widmung, the second, Vladimir Horowitz’s Carmen Variations.

Allen Huszti is Emeritus Professor of Music at Sweet Briar College. He lives in Oberlin.

END_OF_DOCUMENT_TOKEN_TO_BE_REPLACED

The portents weren’t good for the week of March 8: first the disorienting switch to Daylight time was to click in on Sunday, then a full moon would rise on Tuesday, then the 13th of the month was scheduled to fall on Friday. Midweek, the spread of COVID-19 added a spiraling series of postponements, cancellations, and shut-downs to an already unlucky period. Like other educational institutions, Oberlin College and Conservatory found themselves making decisions about how to proceed, only to change plans several times. END_OF_DOCUMENT_TOKEN_TO_BE_REPLACED

That old saw about absence making the heart grow fonder: how true it feels now! With concerts canceled to prevent the kinds of confined massing that facilitates the spread of COVID-19, musicians are suffering. Critics have already filed reports on the grim uncanniness of clear schedules and empty halls. Just before this writer’s exile from the scene, however, a spark of life shot skyward, and now stands as a last memory of live performance before social distancing. END_OF_DOCUMENT_TOKEN_TO_BE_REPLACED

The Cleveland Chamber Music Society sailed into relatively uncharted waters on March 3, hosting the Bay Area male vocal ensemble Chanticleer in “Trade Winds.” This musical voyage took its name from a triptych by Zhou Tian, part of a varied program that called in at multiple ports for Italian madrigals, settings of Ave Maris stella (“Hail Mary, Star of the Sea”), an Edwardian part song, a Portuguese Mass, songs from the Pacific, and English sea shanties. END_OF_DOCUMENT_TOKEN_TO_BE_REPLACED