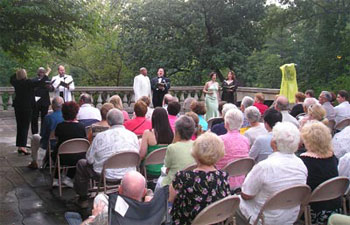 Dedicated as “a symbol of Italian culture” in 1930, the Italian Cultural Garden hosted the San Carlo Opera sixty-eight years ago in its lower level amphitheater. In 2008, this cultural offering was revived presenting the art form of opera that originated In Italy at the end of the 16th century. —Program notes

The 6 pm performance was part of the Viva La Cultura Italiana cultural series made possible by the support of Mr. & Mrs. Salvatore Russo, Sr., Mr. and Mrs. Ken Lanci, Councilman Jeffrey Johnson (Ward 8) and Diana Maiola of Italian Tours by Diana. The air was filled with excitement and anticipation as hundreds gathered to enjoy an entertaining evening of operatic “chestnuts.”Joyce Mariani, Executive Director of the Italian Cultural Garden Foundation, staged the event with great attention to detail and worked tirelessly behind the scenes. Guest announcer Jan Jones added a professional touch with her verbal introductions of each selection.

Andrea Anelli (founder & artistic director of Opera Per Tutti) and soprano Rebecca Freshwater opened with the “Flower Duet” from Delibes’s Lakme. beginning a program that lavished the audience with offerings from the “Who’s Who” of the pre-1925 opera world: Gounod, Delibes, Puccini, Donizetti, Massenet, Verdi, Leoncavallo, Rossini, Sorozabal, Tosti, Leoncavallo and Bizet.

Andrea Anelli sang with a splendid, clear brilliance, weaving a beautiful web of vocal nuance throughout the performance. Though the “Flower Duet” lacked precision between singers and piano, these early jitters were quickly gotten over and all finished together beautifully. Anelli’s “Gavotte” from Massenet’s Manon was lovely and demonstrated her vocal flexibility from top to bottom as the music floated effortlessly on a cushion of controlled breath. Her duet with Rosario, the Seguidilla from Bizet’s Carmen, was a highlight. As always, her gleaming, bright eyes told the story with every musical line she sang.

Soprano Rebecca Freshwater sang with a solid, full-bodied tone while popping off some fine coloratura jaunts into the stratosphere in the aria “Una voce poco fa” from Rossini’s Il Barbiere di Siviglia. She used her chest voice to impressive interpretive effect.

Tenor Leodigario Del Rosario was exceptionally dramatic in terms of vocal resonance and brilliance. His aria “Lucevan le stelle” from Puccini’s Tosca was a highlight of the evening and the crowd responded with loud bravos. His attention to detail endowed Rudolfo’s aria “Che gelida manina” from Puccini’s La Bohème with touching, lyrical beauty. Del Rosario has a splendid voice and his pianissimos were magnificent.

Tenor Dan Doty sang with abundant character and ringing brilliance in his upper register, although his lower range lacked resonance and often faded in and out. His singing was dramatic and his “Nessun dorma” from Puccini’s Turandot was solid and well received by the audience. His duet with Anelli, the Brindisi from Verdi’s La Traviata, was both strong and playful.

Baritone Benjamin Czarnota sang his well-chosen opening aria, “Bella siccome un angelo”, from Donizetti’s Don Pasquale with bravura and even tone. His arias, “Questo amor” rom Puccini’s Edgar, and “Zaza, piccolo zingara” from Leoncavallo’s Zaza (one of the most difficult in the baritone repertoire) were filled with drama and infused with poignant and penetrating vocal production. His duet with Del Rosario, “Au fond du pemple sait” from Bizet’s The Pearlfishers, had the right feel and expression but the balance was uneven because they shared a single microphone. Throughout, Czarnota portrayed his characters with conviction and sang with authority.

This was just plain operatic fun at its highest level. The lawn and chairs were filled with families breaking bread together and sharing their wine and cheese with their neighbors. These were opera lovers who had come to hear opera in its purest form with no orchestra, sets or costuming. They were not disappointed. It is indeed a feather in the cap of Cleveland to have Andrea Anelli and her Opera Per Tutti troupe of professional singers sharing their talents so expressively with us.

Jackson began the program with a recitation of Langston Hughes’ poem “Helen Keller” — the first of five poems by Hughes that served as interludes between each piece on the first half. END_OF_DOCUMENT_TOKEN_TO_BE_REPLACED

Pianos with pins and tape on strings, a bass drum and tam tam, crotales, Almglocken, and vibes. Microphones were hooked up all around the instruments. The feed was sent to speakers around the room. Lighting designer Nicholas Houfek hung incandescent globes over the arrangement of instruments from thin black wires stretching across the beams. END_OF_DOCUMENT_TOKEN_TO_BE_REPLACED

From the podium, Elim Chan set an ambitious tone for the evening. The rising star conductor, here in her Cleveland Orchestra debut, has a commanding style, and every twist and turn in Saturday’s performance tracked closely with her baton. END_OF_DOCUMENT_TOKEN_TO_BE_REPLACED