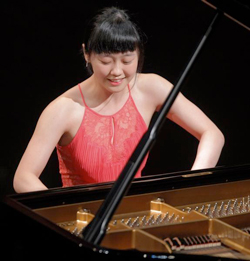 The Youngstown Symphony presented its second Powers Auditorium classical concert on Saturday evening, October 19th with a fine and varied program. The evening’s highlight, an excellent performance of the popular Edvard Grieg Piano Concerto in A Minor, Op. 16, featured the young and remarkably talented Fei-Fei Dong as soloist.

The first movement, Allegro molto moderato, after its short timpani roll opening, immediately presented a brilliant piano cadenza performed by Dong with steely precision and poised expression. She showed great rhythmic control and played her solo passages masterfully, but without being overbearing or excessively forceful. Conductor Randall Fleischer maintained careful control of the musical flow—always shaping the evolving interplay of horn solos, cellos, other members of the orchestra, and the piano solo. After the cello section theme restatement, Dong returned with a flashier cadenza replete with terrific muscular playing and lots of decorative trills.

The slow movement, Adagio, began in the distant key of D flat major and negotiated an interesting movement to the parallel minor. The lyrical orchestral introduction included lovely solos in horn and oboe, and a short cello section lead, after which the piano took over to unfold thematic statements further. Beautiful second-theme interplay among clarinet solos, horn solos, and the piano led to a fortissimo recurrence of the theme shared by piano and orchestra.

Dong’s encore was a garishly virtuosic Mozart Rondo alla Turka transcription which she tossed off effortlessly. Double octave passages were legion, and virtuosity remained unconstrained for the entire movement. Needless to say this produced a standing ovation, though one longed for some expressive playing to match the technique. Interestingly enough, the concert had opened with Mozart’s Overture to The Abduction from the Seraglio, K 384. The use of Turkish Janissary music in both selections made for a nice connection. Lots of cymbals, bass drum, and triangle enlivened the overture.

The concert’s second half consisted of a solid reading of Brahms’s Symphony No. 3 in F Major, Op. 90. The symphony could not be more different than the ornately decorated Janissary music in the Mozart Overture, or the virtuosic Grieg piano concerto. Brahms uses very little percussion, relying more on the intricacy of his musical ideas, which are often full of hemiolas, cross rhythms and contrapuntal treatment.

The first movement, Allegro con brio, began with a complex texture led by the strings, but shared with the solo French horn. The small size of the Youngstown Symphony string section created no problems in the Mozart or Grieg, but here the solo horn opening entrance completely drowned out the lead string texture. The proper size of each violin section should be about twenty players, and, for this evening, there were only nine first violins. The smallness of all five string sections contributed to an imbalance throughout the performance.

Notwithstanding, the performers gave more than one hundred percent and produced a fine rendition. The second subject produced glorious clarinet, flute, and oboe solos, and excellent woodwind playing in general. The closing theme had lovely solo passages in all the woodwinds as the strings accompanied beautifully. The short development and powerful recapitulation added brasses at the climaxes. The interesting, prolonged coda alternated woodwind, brass and string sections until the final tutti closed the movement with power and grace.

The clarinets, bassoons, and horns excelled in the quiet second movement, Andante, playing the lead roles in the main and second themes that alternated in an enchanting Rondo. Brahms employed a reduced orchestra of strings, woodwinds, and only two horns in the third movement, Poco allegretto. The opening in strings and woodwinds is a theme of unparalleled beauty. The performance was absolutely gorgeous. The long and multi-themed finale was also exquisite.

END_OF_DOCUMENT_TOKEN_TO_BE_REPLACED

Rodgers & Hammerstein’s Cinderella was originally produced for television in 1957 — seven years after the animated Disney film was released — and starred Julie Andrews. According to the Rodgers & Hammerstein website, it was viewed by over 100 million people. END_OF_DOCUMENT_TOKEN_TO_BE_REPLACED

The story line has its origin in an 1855 play and an 1842 farce that Thornton Wilder mined for his 1938 play The Merchant of Yonkers. When that turned out to be a flop, in 1954 Wilder made the crucial decision to re-center the show around the character of the legendary marriage broker Dolly Gallagher Levi and renamed it The Matchmaker. END_OF_DOCUMENT_TOKEN_TO_BE_REPLACED

The Dodero Center for the Performing Arts at the Gilmore Academy in Gates Mills is one feature of an impressive campus. The auditorium is shallow, the stage is deep, and the ensemble played without a shell. Throughout the program, the sound, especially in instruments’ lower registers, tended to disappear. END_OF_DOCUMENT_TOKEN_TO_BE_REPLACED